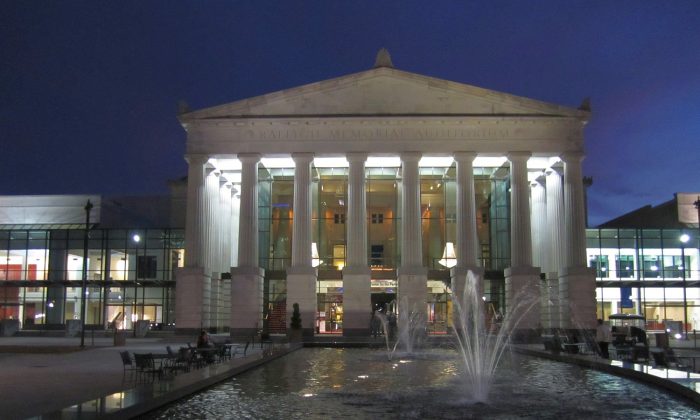 RALEIGH, N.C.—January is traditionally the coldest month in North Carolina, yet for the past eight winters, Shen Yun Performing Arts has warmed the hearts and souls of audience members with its beautiful and stirring music and dance.

This weekend, on Jan. 23 and 24, Shen Yun is ready to delight and entertain audiences once again by bringing to life the myths and legends of a divinely inspired ancient culture in three performances at Duke Energy Center for the Performing Arts.

As the Shen Yun website explains, from the graceful and flowing female dancers to the acrobatic and masculine male dancers, Shen Yun has been enchanting audiences around the world with classical Chinese dance.

The accompanying live orchestra blends traditional Chinese instruments with classical Western instruments to produce a unique, expressive sound not heard anywhere else. The animated digital backdrops pull the audience into the scenes and transport them to other places and times where they feel everything coming to life in front of their eyes.

Shen Yun’s performances are richly entertaining and educational. Audiences get to experience the grandeur of China’s past dynasties and find out why China was once called the Land of the Divine.

They get to peer into the stories, values, and history of traditional China, as well as learn about the different ethnic groups and their folk traditions. The audience sits back as classical Chinese dance and music do the storytelling.

Shen Yun is one of the most timely and significant performances of our times. Based in New York, Shen Yun’s mission is to revive 5,000 years of traditional Chinese culture—a culture lost under decades of communist rule in China.

Two of the dances portray practitioners of Falun Dafa—a peaceful spiritual practice that is persecuted by the communist regime—standing courageously and compassionately in the face of persecution. Many audience members comment on how moving and thought-provoking the dances are. They connect modern China with traditional China for the audience.

After every show, audience members in North Carolina have given enthusiastic feedback. Some audience members interviewed in past seasons mentioned that they had been to several Shen Yun performances and intend to come again in the future.

Roger Carol, formerly in the U.S. Air Force and a banker, now retired, said of last year’s Raleigh performance: “This is my third time in the last few years. … I really enjoy it. World-class.”

“You’ll be amazed and blown away and never disappointed,” Jay Taylor said of last year’s performance.

Tess Sharpe was also in attendance last season. “It was breathtaking. … I cried—so emotional, so beautiful. I would come back again and see it,” she said. “The magic performed onstage was just awesome.”

Every year, Shen Yun presents all-new material. The performances seem to have a powerful draw on the human heart and spirit. Shen Yun has indeed become a North Carolina soul-warming tradition in the middle of winter.