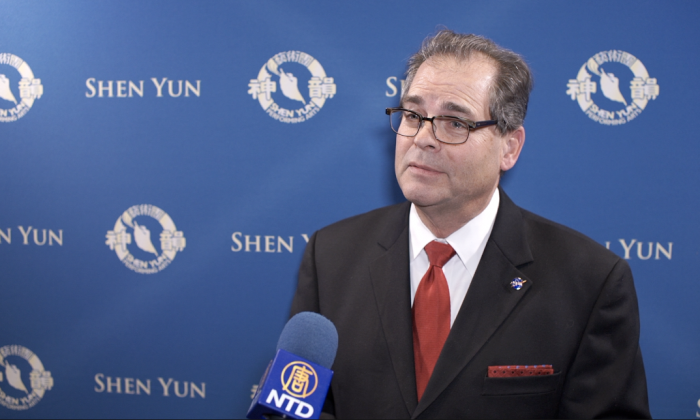 PHOENIX, Arizona—Television and radio personality Steve Kates has seen Shen Yun Performing Arts four times. Kates said he tries to catch the traditional dance and music performance every year, as it depicts the importance of freedom and spirituality.

“I think it’s so important that the message of Shen Yun get out there to as many people as possible because freedom is in our blood, no matter what our race, color, or creed, and that’s one of the reasons it’s so beautiful,” Kates said.

Kates, who goes by the stage name Dr. Sky, is also a president of his own multimedia company. He experienced the opening performance of Shen Yun at the Orpheum Theater in Phoenix on Feb. 19. The New York-based company is in the midst of its 2019 tour where six equal-sized groups are set to perform in over 100 cities.

Shen Yun’s mission is to revive China’s 5,000 years of semi-divine culture that was lost over seven decades of communist rule. Kates said he thinks it’s important that Shen Yun continues to spread its message about the need for freedom in China.

“I look at this whole story as being very beautiful because what I talk about as a TV and radio host … is that I believe very strongly in the term ‘freedom,'” Kates said.

He felt that at its core, Shen Yun is about freedom, and that was a message that needed to be heard around the world.

“There are many people around the world,and in particular the many people in China, who are striving … many of them can’t even send a photograph back to their parents or their loved ones. And that’s something I find in my heart, we need to get the word out. It’s about freedom, it’s about individuality, and let freedom ring all over.”

These stories portray themes like spiritual devotion, the benevolence of gods, good and evil retribution, and the search for the meaning of life, according to the company’s website. Such values are foundational to traditional Chinese culture and are not political in nature. Instead, these pieces encourage deep reflection and inspire audience members, just like Kates.

“As we are divine beings coming from heaven, and what I see here on the Earth today with all of our problems, I think we need to relax. I think we need to understand there’s more spirituality in the world. It’s not all about cell phones and our bank accounts, and of course these things are important, but what I really believe deep in my heart is that the message of Shen Yun is very powerful,” he said.

The TV and radio host continued, “the simple message that I look at from this is the spirituality, the humanness, the beautiful dance … [and] the amazing talent that’s on that stage!”

“When I see these performers that live the lifestyle, it’s a beautiful thing. Just like in the universe, energy—the energy of the universe. You see that in Shen Yun when you see these wonderful performers, beautiful colors, and the spirituality.”

Kates said he encourages people to come and experience these simple yet powerful messages for themselves through Shen Yun.

“I think what comes out of Shen Yun is a peacefulness, a spirituality, and a yearning to pass that on to people just as we are right now for the audience that’s watching this,” he said. “Come and see Shen Yun folks, you’ll really love it!”