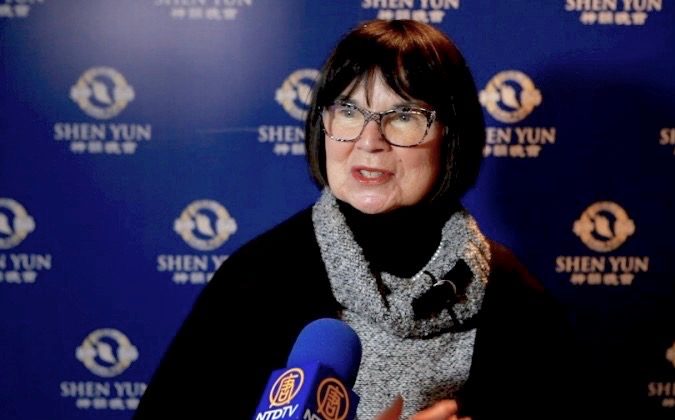 The right clothes—usually consisting of loose gowns, wide sleeves, and flat, open collars—gave off an aura of refinement and dignity. Clothes embodied the virtues of Chinese antiquity, indicated rank (high hats and wide belts for scholars and officials), and contributed to the culture’s perception of self.

The carefully considered details and unique colour combinations in Shen Yun’s regalia was a highlight for audience member Devine Elden–a former dress shop owner who spent her career considering these kinds of things.

“This really filled my passion. It was magnificent. I loved the colours and the costumes,” she said after the Jan. 23 matinee performance at the Queen Elizabeth Theatre in Vancouver.

“I can’t say enough for this program. I will be back again.”

Ms. Elden started the Jet-Lag Travel Fashion Boutique in Steveston, British Columbia, catering to upscale women looking for comfortable and chic attire for travel and everyday wear. Years of helping women look their best trained her eye to find beauty in every detail—such as the unique colour combinations of Shen Yun’s costuming.

“I loved the colours-turquoise and the terra cotta. They were brilliantly put together,” she said.

New York-based Shen Yun was formed in 2006 with a mission to revive China’s divinely inspired 5,000-year culture–a culture that was virtually destroyed over decades of repression by the Chinese communist regime. Ms. Elden appreciated the sheer force of will it took for a dance company to shoulder such a lofty mission.

“I appreciate the hard work that has gone into making this company work,” she said.

“Just the passion of the artists—it’s a lot of discipline.”

Ms. Elden appreciated the diversity and depth of meaning the dances conveyed.

“It brings in so much of the complexities of our world today. And it gives you insight without saying much. The dance says it all,” she said.

“I think everyone should see this show.”

Interior designer Anouk Sabo, also in attendance for the Jan. 23 matinee performance, added the performance was a fascinating learning experience.

“It was wonderful, it was so delightful–the colours, the music, and just the cultural influence is very mesmerizing.”