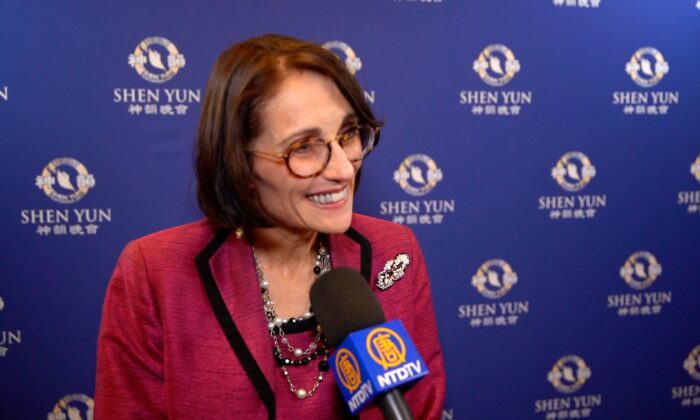 “It’s very expressive,” she said of the classical Chinese dancing in Shen Yun. “I’ve never experienced it before … I guess it would be somewhat stylized, because of the rich tradition, but very much enjoyed. Very expressive—lovely.

There were a couple things that really caught her attention within the dancing. Reister explained, “The high heel shoes with no heels were interesting. How were they doing that!? It looked like they had cups on their feet or something, so that was exciting.”

Did you know that the ladies of the Qing Dynasty wore Manchurian shoes that looked like flower pots? This description makes sense not only because of the shape of the shoes' four-inch-high soles, but also because the ladies had to walk like graceful flowers when they wore them—or else they might tip over. These delicate shoes made women appear taller and more slender. Women had to slow down, have good posture, and take dainty steps. So although they were more difficult to walk in than today’s high heel shoes, the flower pot shoes gave Manchurian ladies an image of refinement and a touch of grace.

She later elaborated that what stood out to her more than anything was the simply the storytelling aspect of the dancing. She was impressed by the dancers’ athleticism and the fluidity of their movements “flowing and fluid were the words that come to mind, it was just beautiful, charming, and exciting,” she said.

Reister felt the overall coordination of the program was outstanding. “It was perfectly—perfectly seamless is the word that comes to mind, it’s just perfectly flowing and seamless and it didn’t miss a beat,” she said.

After the finale, she was left feeling uplifted and inspired.

“It’s an experience, it’s unlike anything you have seen before,” she said.