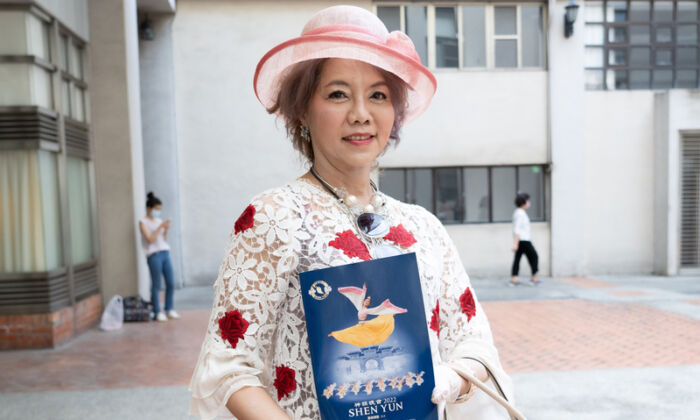 KAOHSIUNG, Taiwan—Shen Yun’s International Company presented its second show in Kaohsiung on the afternoon of June 22. Many business people and artists went to watch the show, and about 100 Shen Yun fans from Taitung drove three hours to Kaohsiung for the performance.

New York-based Shen Yun held the audience’s attention from the opening scene to the final scene, as it brought to life a civilization steeped in spirituality.

Attending for the third time, Chen Hsiu-Chen, the chief executive of the Artists’ Dream Music Workshop, expressed her emotions at being able to attend Shen Yun.

“Joy is a good medicine, which helps you to gain immunity,” Ms. Chen said. “[I feel that] Shen Yun has the ability to fight evil.”

Ms. Chen spoke about how one of the dance pieces in the program, “The Display of Great Compassion,” affected her.

“I was very moved. I felt the backdrop emit a light that entered my heart. I felt the divine’s compassion, integrity, and goodness,” she said.

Ms. Chen said she was moved to tears during the show, admiring the performers’ efforts to “spread a positive message to the world.”

Ms. Chen wanted to express her gratitude to Shen Yun‘s artistic director. “He brings positive energy to people all around the world. … The artistic director is a real genius. He is the savior of the earth.”

Ms. Chen believes everybody will love Shen Yun if they see the performance—she urged people around the world to “see Shen Yun.”

“Shen Yun shows the world that dance, music, and color can be combined so perfectly,” Ms. Wu explained.

Shen Yun says its aim is to revive China’s culture, which has been all but destroyed under decades of communist rule in China.

“We should simplify ourselves, return to sincerity and kindness, and follow Truthfulness-Compassion-Forbearance.”

Tseng Ching-pin is an assistant professor at the Theater Arts Department of National Sun Yat-Sen University. He was touched by the top-class performance.

“Shen Yun artists are high level, well trained, and must put a lot of effort to present this perfect show,” Mr. Tseng said. “The backdrop’s integration with the artists was very vivid.”

“Many stories that Shen Yun presents gave us the opportunities to connect our lives to the truth,” Mr. Tseng said.

Mr. Tseng was impressed by soprano Yu Ming’s song, which encourages people to keep traditions and lead a moral life.

“This song made me feel that we, human beings, should not only pursue the materials. We should explore humanity, and return to our human nature.”

Reporting by Epoch Staff in Kaohsiung.