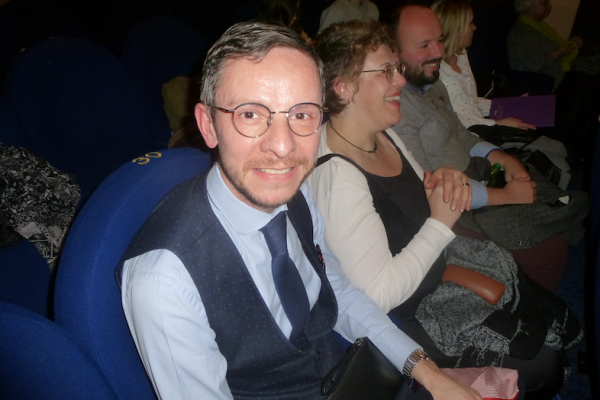 Alexandre de Meerschman at the second Roubaix performance of Shen Yun at the Colisée de Roubaix on Feb. 22, 2019. (The Epoch Times)

ROUBAIX, France—Alexandre De Meerschman attended the second performance of Shen Yun Performing Arts at the Théâtre Le Colisée de Roubaix, France, on Feb. 22; he was one of the many audience members who gave the performers a seemingly endless stream of applause as the performance came to a close.

“It’s a real success and a real pleasure in terms of colors and dances, a cultural learning experience,” De Meerschman said.

De Meerscham is a manager of a real estate company in Lille, and the owner of another decoration company.

He said Shen Yun was “an opportunity to discover and to integrate a little more of this [Chinese] culture.”

De Meerschman appreciated the richness and depth of the traditional Chinese culture that the New York-based company presented on stage.

“[There is] a lot of rigor and respect, that’s really what comes out of it today,” De Meerschman said. He referred to the form of dance especially. Classical Chinese dance has carried the essence of Chinese civilization for thousands of years, and in it De Meerschman saw “rigor and a lot of elegance, and magic!”

“This is what is transmitted, and the messages are almost supernatural,” he said.

De Meerschman was shocked to learn that such traditional culture is being repressed in the country of its own rule, by the Chinese communist regime. He appreciated that Shen Yun was bringing this to the world’s stage outside of China.

“The fact that we can talk about it so openly in different circumstances, this is very special and it allows the message to be transmitted,” he said.

A lover of the classical music and accustomed to attending ballet performances, Alexandre De Meerschman was thus able to discover another art form and receive with a certain emotion “the messages of wisdom, kindness and respect that are transmitted.”