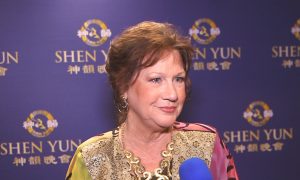 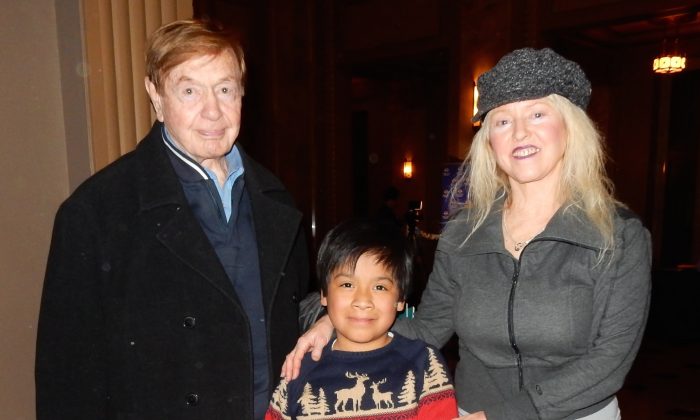 The husband and wife both agreed that everything about the performance was fabulously beautiful. Mrs. Gravlin was touched and said, “Each story was so beautiful and it had such beautiful meaning.”

Shen Yun is a New York-based company that has set out to revive the ancient traditions and customs of China through Chinese classical dance. The dancers wear dazzling handmade costumes, perform in front of huge animated backdrop, and are accompanied by a live orchestra.

Through music and dance, about 20 or so vignettes depict stories from China’s mythology, folklore, literature, and history from ancient times to the present.

“Classical Chinese dance has helped preserve 5,000 years of Chinese culture. Built on traditional aesthetics, it was once passed down among the people, in imperial courts, and through ancient plays. Over thousands of years, it was constantly refined, eventually developing into the vast and distinctly Chinese dance form we know today,” according to the company’s website.

Feeling inspired and somewhat envious of the dancers, Mrs. Gravlin commented, “It’s very different, and very beautiful. I was thinking the whole time … to myself ‘Okay, where can I go to dance like this?’ This is so beautiful.”

Mr. Gravlin was happy the program recognized the existence of God. “We didn’t just all land here. We are here for a purpose, to help each other, and there’s a God that inspires us. [These] are some of the things that was brought out in the show.” he said.

Feeling uplifted and happy she attended tonight’s performance Mrs. Gravlin said, “I would tell everyone to come and see this.”

Mr. Gravlin was glad that he came and after having witnessed some of his own values in the performance, he said that he would tell his friends to come as well.

“It’s fantastic. I like the technique …,” said Gina Delarue, who is a former professional dancer, now teaches ballet, tap, jazz, and dance fitness. Tonight’s performance was the first time she experienced Chinese dance.

“I didn’t expect it to be such detailed stories,” she said. “I can tell just by the dancing I’m learning culture, things I didn’t know about the persecution, [and] that they couldn’t show this in China now.”

Ms. Delarue’s referring to the persecution of Falun Gong (also known as Falun Dafa) in Mainland China. Falun Dafa is a peaceful meditation practice that embraces the guiding principles of truth, compassion, and tolerance. And it’s been brutally persecuted by the communist regime since 1999.

According to Shen Yun’s website, “For 5,000 years divine culture flourished in the land of China. Humanity’s treasure was nearly lost, but through breathtaking music and dance, Shen Yun is bringing back this glorious culture.”