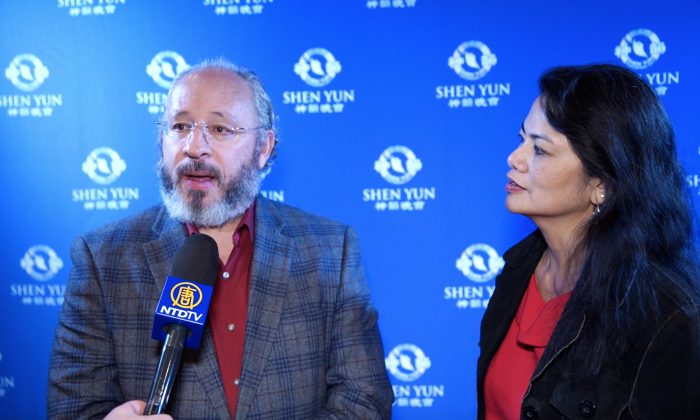 ROSEMONT, Ill.—After seeing Shen Yun Performing Arts, some people walk away in a state of seemingly pure contentment.  Jaime and Mylene Santana had that kind of experience on Valentine’s Day at the Rosemont Theater.

Mrs. Santana had spent the day at work as an intensive care nurse, but then, coming to a performance that is stunning—to see something so beautiful—was wonderful.

She had seen the Shen Yun commercials for as long as she could remember. “I’m so glad we finally came.  It was much more than we expected. We knew it was going to be spectacular, but this was beyond that—the music, the colors,” she said as Mr. Santana picked up from there with “the dancing, the voices—beautiful—everything perfect.”

With its six companies of musicians and dancers, New York-based Shen Yun travels the world showcasing the essence of Chinese culture, a culture so profoundly spiritual that the land was once known as the Celestial Kingdom.

At the heart of every Shen Yun performance, and what actually conveys the sublime beauty of the traditional Chinese culture, is classical Chinese dance, which Mrs. Santana had never seen before.

“I loved the stories; they take us from the beginning and all the way through to the present day which is wonderful,” Mrs. Santana said. “I think that’s what was mesmerizing.”

Mr. Santana, an attorney, described how he especially enjoyed the technological aspects of the performance. Shen Yun’s digital projections make the scenery come alive, with waves lapping, statues enlivening, and figures flying to the heavens.

But in addition to the technical aspects, he appreciated “being taught the Chinese culture.”

“I give credit and I admire and salute the Chinese performers and the director and everyone that is involved with this, for having to take the risk to come to our country here in the United States and bring the culture here,” he said.

Ever since the Chinese Communist Party took power, the spiritual and culture heritage of the Chinese people has gradually been dismantled.

“That’s a shame because it is such a beautiful culture, and we’re grateful and thankful, yes,” Mr.  Santana said.

The last dance of the program resonated with both Mr. and Mrs. Santana. It starts in present day China, but, as Mr. Santana said, “brings it to the future.” At first, the dancers portray people absorbed in their cell phones, but then traditional beliefs and values—acts of kindness and faith—appear.

And these are very touching. They allow the audience to understand that these values are still important.

And we can apply traditional values even today. It’s important “to know that it still can be applied in today’s world. I think we need it more now than ever. Don’t forget that there’s still goodness; there’s still truth …  That’s beautiful,” Mrs. Santana said.

“We spent two hours of just happiness. It was great,” she said.