Shen Yun ‘True to How We Feel’ 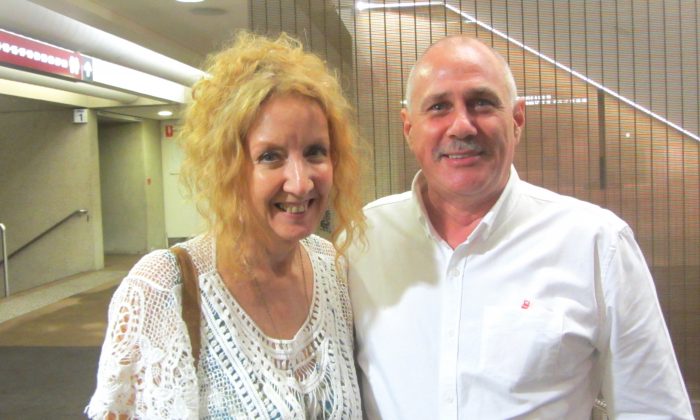 Based in New York, Shen Yun aspires to reawaken China’s 5,000-years of a divinely inspired culture, almost destroyed after the communist regime took power in 1949.

Mrs. Macer said when she read about the performance with her husband and the pair became excited, “because what we read, we could relate to with our own beliefs, so we knew it was going to be wonderful,” she said.

According to Shen Yun’s website, “China was once known as Shen Zhou—The Divine Land. This profound name describes a land where deities and mortals coexisted, and a belief that the divine transmitted a rich culture to the people of the earth.”

“Which is very similar, if not the same to how we think, same beliefs which is beautiful and very meaningful and true to how we feel,” Mrs. Macer said.

“Lots of beautiful colour and the performances were brilliant, fantastic, very clever and creative, very creative. So a huge mixture of lots of different creation of the performers, very, very clever.”

Mr. Macer is a manager in the mining industry. He said he would tell family and friends the highly acclaimed classical Chinese dance and music presentation “was definitely spiritual, full of colour, excitement and just wonderful performances.”

“It’s something you really have to see to really understand and enjoy,” he said. “It was very interesting. I love the costumes, they were absolutely stunning and the performers themselves too were really, really good.”

He was touched to see the persecution by the communist regime of the ancient spiritual practice, Falun Dafa, included in the performance.

“That was really good. It’s good to see the Chinese people are fighting for their rights and standing up for what they believe, and to make the world a better place.”

“The feeling of the beliefs and everything else that were coming through from the dances, and the dancers themselves, is something very similar to what we believe. It’s very inspiring and hopefully it will inspire others as well.”

The pair will definitely return to see the performance again next year.

“I’m sure it will be just as amazing as this year,” said Mrs. Macer.

Catherine Downie, a partner in a small Queensland business, loved the “gracefulness” of Shen Yun. She said “the technique is absolutely brilliant! The costumes are astounding!”

Ms. Downie said this is her third time she has seen Shen Yun and next year she will see the performance again.

She loved the dance story from the classic novel ‘Journey to the West‘, “Monkey King and the Dragon King” for its humour.

“The rightfulness! There is an obviously strong message given to the world today,” she said. “I respect Chinese culture. I do believe they are far ahead of the Western world. And we can learn a lot from Eastern world.”

Ms. Downie said there is a large number of religions and cultures in the world today and she has a great respect for ancient Chinese culture. “They’re all heading in the same direction, and it’s beautifully put together,” she said.