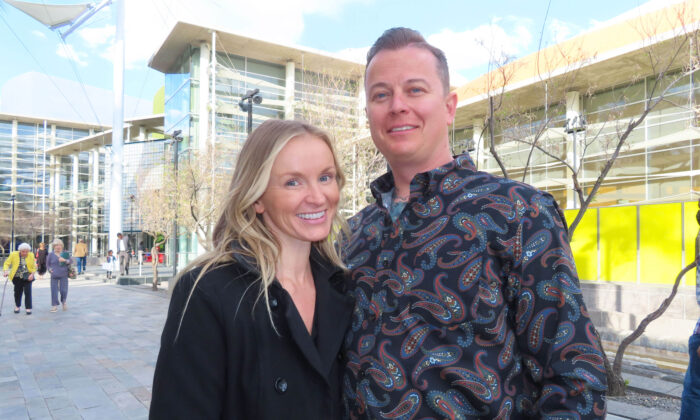 MESA, Ariz.—Wherever New York-based Shen Yun Performing Arts presents, its audience unfailingly express an appreciation for the beauty and perfection in its panorama of classical Chinese dance and music.

Kate Weed, a marketing executive, said she thoroughly enjoyed Shen Yun at the Ikeda Theatre in the Mesa Arts Center.

“I loved it. I thought it was so beautiful—the stories, the costumes, the colors. Learning about the culture was amazing,” said Ms. Weed, who was accompanied by her husband.

There is an appreciation for the chance to experience the true traditional Chinese culture as it was in pre-communism.

The company‘s dance performances are accompanied by Shen Yun’s live orchestra, which combines traditional Chinese instruments and classical Western instruments, as well as beautiful animated backdrops on the stage that interact with the dancers using the company’s patented technology.

She was drawn to the energy exuded by the dancers and was transfixed by the costumes.

“They were so intricate,” she said.

The costuming and choreography impressed Ms. Weed. She mentioned two particular pieces that resonated with her; “Plum Blossom in Spring,” a dance that depicts the bravery of plum blossoms as they face the deep chill at the end of winter, and “Water Sleeves,” where the ladies of the imperial court move gracefully swinging their long sleeves.

Chinese traditional culture was believed to be divinely inspired and that its traditions were gifts from heavenly beings.

The vision of the Creator as portrayed by Shen Yun and the theme in the performances of “light versus dark” also intrigued Ms. Weed.

These spiritual concepts were epitomized in the mini-dramas “Display of Great Compassion” and “Insanity During the End Days”—dances that left Ms. Weed feeling deeply moved.

“I know what communism is, but I don’t really know what kind of impact it has on the people there. And so, for me, it’s definitely something that I would educate myself on much more now,” Ms.Weed said.

Also in the audience were Michelle Lunday, an HR business partner, and her friend of 30 years, Azure Allen.

“There was like real strength and power without it being overpowering,” Ms. Lunday said, adding that the performance—through its art, music, and dancing—subtly conveyed the essence of their narratives.

“Shen Yun touches your heart and spirit. It penetrates into your real self,” she said.

The colorful and intricately tailored costumes of the dancers caught Ms. Allen’s attention. “The female dancers twirling their skirts left an indelible impression on my senses,” she said.

“I just found the show to be very relaxing and calm,” Ms. Allen said.  You could barely hear the dancers’ feet. “I was expecting a lot of hard landings but it was very, very soft.” The performance left her with a feeling of peace and happiness.

In post-pandemic times, Shen Yun is clearly reviving the spirit of the audience, Ms. Lundy said.

“There was a packed house. There were not many people that worried about the pandemic. I think the camaraderie of people just came together and [they were] really interested in the [performance] itself. There was no worry and I think that’s where we need to get to,” she said.