'Very deep sentiments' about spirituality connected her with the Chinese culture 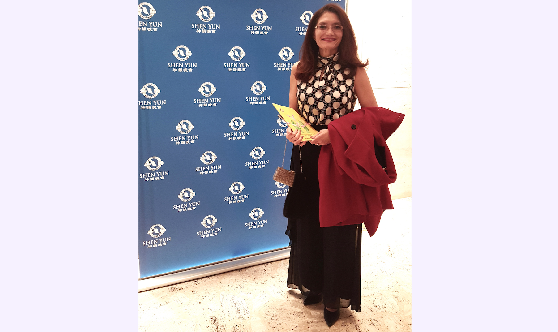 NEW YORK—As an ESL Recruiter for CUNY living in a bustling city home to a myriad of different cultures, Rosemarie Martinez has more contact with other cultures and traditions than the average person.

Her cultural knowledge was further expanded after seeing a sold-out performance of Shen Yun Performing Arts at the David H. Koch Theater at Lincoln Center. A Chinese friend encouraged her to purchase tickets.

“It was exquisite,” she said, thankful for Shen Yun for giving her more insights into traditional Chinese culture.

Through a performance of classical Chinese dance and music, the New York-based company brings audiences on a journey through five millennia of traditional culture and civilization with scenes of imperial courts, ethnic tribes, ancient legends, and even heavenly realms.

The Chinese people traditionally believed that Chinese culture was divinely bestowed—a gift from the gods. Spirituality permeated all aspects of Chinese culture since ancient times. Like the artists of China’s history, Shen Yun’s performers venerate the divine with their art, according to the Shen Yun website.

Walking into the theater, Mrs. Martinez had not expected the deeply spiritual messages of the show. “I’m a Catholic, and I was very surprised that they brought in very deep sentiments about the Lord and heaven,” she said.

She felt that this faith and spirituality is vitally important to people today, since material pursuits only last a lifetime. “Wealth and fame are not going to go anywhere. In the end, we’re going to go empty, so we might as well fill ourselves with all the glories of the Lord that we can here on earth,” she said.

In today’s society, religion and faith are almost taboo subjects, so she was glad Shen Yun emphasized these themes in their music and dance pieces. “In this society nowadays, we can’t talk about God, we can’t pray in schools, and we can’t even say ‘Christmas’ anymore,” she said. But seeing these spiritual themes made her feel more connected with Chinese culture, she said.

She was also glad that Shen Yun could perform here in the United States, since the company is banned from entering and performing in China, the very country they portray so beautifully on stage. “To see that they can bring the culture here to the US—something they cannot do in their own country—that was very important to see,” she said.

“I would definitely tell my family to come,” she concluded.

Although the January performances of Shen Yun in New York City are sold-out, the company will be returning to the city in March for another string of performances at the David H. Koch Theater at Lincoln Center.