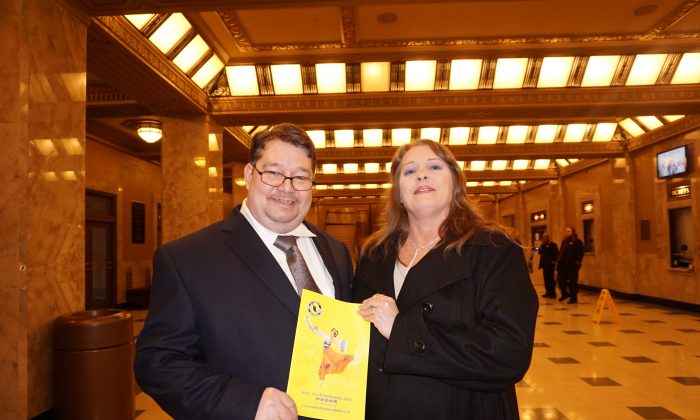 Shen Yun Reassures Us About Life

ST. LOUIS—Edith Bradley gained a new perspective on life by watching a theater performance. When she walked into Peabody Opera House she was irritated, a bit down, and her nerves were on edge. When she left “I felt this immense calm just all over me,” the homemaker and caregiver said.

Ms. Bradley came with her disabled husband, Brian, who fell as soon as he got to the theater, then had to fill out paperwork because of it, and had to miss the beginning of the performance.

The performance had a wonderful effect on Mr. Bradley, too.

“But when the dancing started,” Mr. Bradley said, “and the storytelling behind it, it just uplifted my soul.” It made him very happy to see that this art has survived.

“It uplifted my soul, … it actually calms me down,” Mr. Bradley said. “It’s just when my soul is touched by a song or music, you feel the tingling in your arm and your body from the music, and that’s what I mean by uplifting the soul because you feel that tingling. It touches you, and I got a lot of that through the music and the dancing. It’s just an awesome display of art,” he said.

“It was wonderful,” Mrs. Bradley said. It was so calming to me and the colors were brilliant, and I enjoyed every minute of it.”

It so touched her mind, spirit and heart, that Mrs. Bradley cried during one of the vocal soloist‘s performances, when reading the lyrics projected in Chinese and English on the backdrop.

“When the gentleman sang, and the words up there, it brought me to tears because it is something that people do not think about every day. We don’t realize what the big picture is. So in his singing and the words that were translated, it just made me feel so reassured, and that no matter what happens there will be calmness in your life. No matter what happens, everything happens for a reason.

Shen Yun brings not only the performing arts to life, but the cultural wisdom and philosophy from China’s 5,000 year history. With its roots in Buddhism, Taoism, and Confucianism, traditional Chinese culture is deeply spiritual.

“We are all so caught up in our lives, we don’t realize how complicated we make it. Our world is complicated, but the words that I saw up there when he was singing were very simple.”

“So in order to include those words and put them in my life, acclimate them into my life will be wonderful.”

Mrs. Bradley bought a token of the experience so that she can be reminded of this experience and the change she hopes for in her life.

“I think especially buying the DVD, it will work out in life just as well, so it was amazing. They are amazing,” she said.