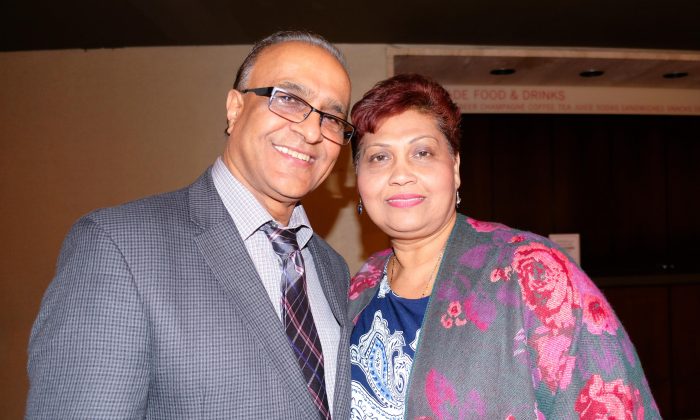 NEW YORK—The beauty and harmony of colors was a great reason Afrose Resauladin wanted to attend a performance of Shen Yun Performing Arts for her birthday. When Mrs. Resauladin attended the performance with her husband, Lincoln, they witnessed a beauty so majestic that the experience became transcendental.

“Where do you start to pinpoint any of it? The entirety was magnificent. It was so beautiful. There’s not one part of that I’d take away from it, because everything is absolutely beautiful. It was so majestic it was out of this world,” Mrs. Resauladin said.

“The interaction with all of the dancers and the colors coming together, it was absolutely heavenly,” Mrs. Resauladin said.

The couple attended the evening performance at The David H. Koch Theater on March 13.

New York-based Shen Yun is the world’s premier classical Chinese dance company, and perhaps there’s some truth to the descriptions like heavenly as used by Mrs. Resauladin.

The name “Shen Yun” itself means “the beauty of divine beings dancing,” as the company’s mission is to revive the authentic, traditional Chinese culture—which is said to be divinely inspired. The 5,000-year empire of ancient China was once known as the Divine Land, its culture imparted by the heavens.

Through music and dance, Shen Yun artists seek to share this nearly-lost culture with the world.

“When you listen to the music, it transcends you to a point where you can’t even fathom that this is humankind doing this,” Mrs. Resauladin said. “it just takes you away. You’re mesmerized by the music and the performances.”

Mr. Resauladin felt the performance was a great expression of humanity and a true human culture.

“It’s expression of the human spirit that comes to life with the artistic performance. It’s the human spirit [on] display. When we are in that spiritual energy, it radiates and it moves us,” Mr. Resauladin said. “It was really, really beautiful.”

The couple was moved by Shen Yun’s mission to keep these traditional arts and culture alive.

“I think culture is very unique … . And it’s part of our being, as human beings. It is important to preserve this culture,” Mr. Resauladin said.

“I would say it’s very inspiring; it’s majestic in its performance,” Mr. Resauladin said. “Their performance is out of this world.”

Mrs. Resauladin said the loss of this culture about be absolutely devastating.

“You can’t even imagine for that not to be in this world anymore,” Mrs. Resauladin said. “They are reviving it and bringing it back and doing this and giving us, the audience, this feeling of transcendence. It’s absolutely beautiful.”