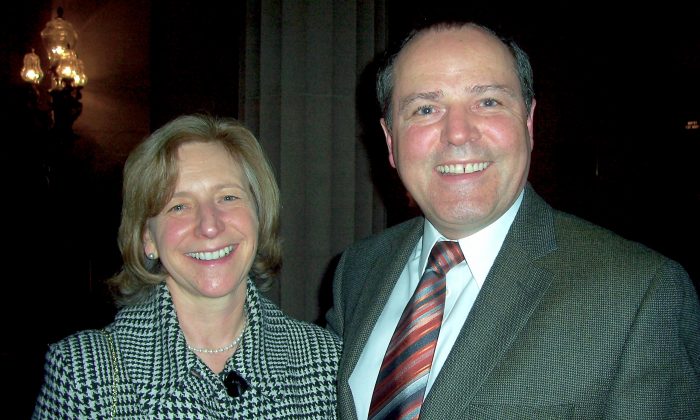 SAN FRANCISCO— Shen Yun Performing Arts’s mission is to restore the authentic, traditional culture of China through the arts. It is not surprising, therefore, that the performance often draws patrons who appreciate culture—culture of all kinds. Some attending New York-based Shen Yun’s matinee at San Francisco’s The War Memorial Opera House on Jan. 10 fit that description perfectly.

Mark Thorogood, the automotive development project manager for Atieva US Inc., brought his wife, Sally, to Shen Yun to celebrate her birthday. Mrs. Thorogood is the principal of the Gais International Baccalaureate School of Silicon Valley. It’s a German immersive school. The family had lived in Germany for years and became enmeshed in the rich international culture of the school their children attended.

“Establishing and respecting the different cultures is very important and having the opportunity to understand a little more about the background is very important for us as well,” Mrs. Thorogood said about Shen Yun.

A Shen Yun performance of classical Chinese dance and music includes a mix of short pieces—mostly dances that give glimpses of the country’s 5,000 years of civilization. The settings range from imperial courts to heavenly realms. The dances depict ancient legends, stories from literary classics, or simply introduce the wide diversity of China’s various ethnic groups. Together the audience tastes some of China’s rich cultural heritage.

Mr. Thorogood hopes Shen Yun’s mission to carries on these traditional arts continues and grows in popularity. “If you lose your culture, you lose a lot,” he said.

Deeply important to these arts is the idea that, traditionally, Chinese culture was considered divinely inspired. Some of the stories depicted portray values like compassion and courage, as well as self-restraint and discipline.

Mr. Thorogood noticed that the song lyrics, projected behind the award-winning soloists, were quite meaningful. Shen Yun’s singers often express the desire of the soul for heaven.

Rebecca Tom, also in the audience on Jan. 10, thought the spiritual inspiration in the performance was great.

The senior director of sales operations of licensing at Dolby Laboratories brought her daughter to the performance. They attended once before, as they alternate their cultural experiences between seeing Shen Yun and other seasonal favorites.

Ms. Tom felt the performance was a good way to tell the world that people cannot freely practice their faith in China, which she considers terrible.

In additional to dances giving a glimpse of ancient beliefs, several depict stories of spiritual repression in China today.

“The inspiration, the message, the dancing,” these things were what Ms. Tom would take away from her evening.

Also in the audience was Marlene Vierra, a Spanish interpreter, who originally comes from Peru but has lived in the United States for years. She learned not only about China’s artistic heritage, classical Chinese dance, the colors, and the music, but about the essence of Chinese culture as well.

What stuck with her is the idea that we all come from heaven—and we may eventually return there.

“That’s something I haven’t heard before, and definitely will stay with me,” she said.

With reporting by Gary Wang, Lily Yu, and Sharon Kilarski