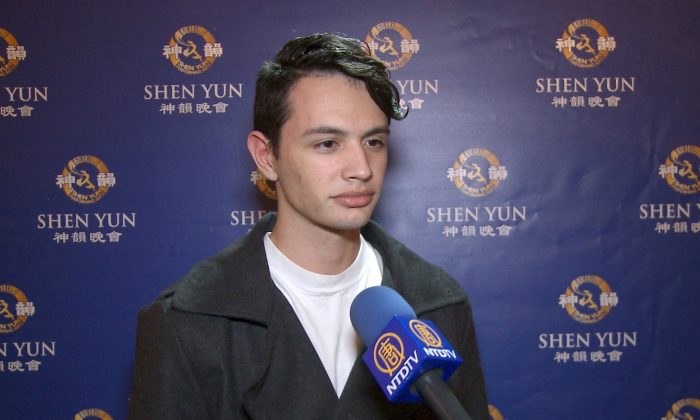 “It’s really inspiring. It’s a lot of stuff that I could take back myself,” Mr. Sanchez said when he attended the performance with his girlfriend at San Francisco’s War Memorial Opera House on Jan. 10. The tickets were a Christmas gift for his girlfriend, who has wanted to go there since she was young.

“It’s my first time for anything like this, so it’s very interesting and different,” Mr. Sanchez said.

Shen Yun is based in New York and aims to revive China’s 5,000 years of rich history and culture through dance and music. Each performance consists of dance pieces accompanied by a live orchestra as well as vocal and instrumental soloists.

“I’m paying attention a lot more to choreography than probably a lot of other people here, because it’s something that I do for a living,” Mr. Sanchez said. “A lot of the spinning and formations, the formation changes, are really different than [what] I’m used to.”

“Most of the choreography I do, a lot of the time it has feeling to it,” Mr. Sanchez said. He appreciated the emotions portrayed in Shen Yun’s dancing, such as hurt or compassion.

“A lot of their storytelling and a lot of their background history, what they believe in, and their creation story,” said Mr. Sanchez, “it’s like a big history lesson for me.”

He was captivated by the culture and tradition expressed in Shen Yun. Part of Shen Yun’s mission is to bring back the culture that was almost lost in China under communist rule.

“It’s very traditional,” said Mr. Sanchez, who feels that many things today have roots in these traditions.

As Shen Yun’s website explains, “Classical Chinese dance has a long history of thousands of years, passed down continuously within the imperial palace and ancient Chinese theater and opera.”

“So a lot of this is tradition, and that’s something that I always really liked about Chinese [culture],” Mr. Sanchez said. “It’s always really nice to bring home especially for your own self, to think about your own traditions, your own background.”