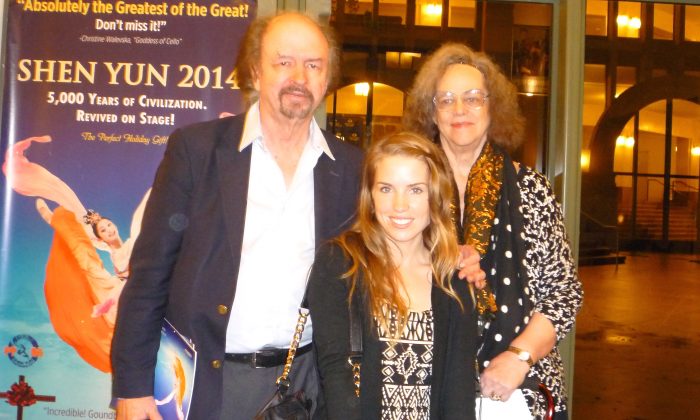 ESCONDIDO, Calif.—Shen Yun Performing Arts’ 2014 tour has proved that its popularity has grown significantly in San Diego. The first three shows of Shen Yun Performing Arts New York Company in California Center for the Arts in Escondido during weekdays (Feb. 26–28) were packed, whereas the last four shows over the weekend (March 1–2), including the last one that was added on Sunday night, were sold out. Despite the severe thunderstorm over the weekend, there was full attendance for the weekend shows.

“I appreciate the beauty and expression that Shen Yun shares with the West,” said Sarah, an artist and writer who only gave Epoch Times her first name, after attending Shen Yun’s performance on March 2.

Through the universal language of music and dance, Shen Yun takes the audience on a journey through 5,000 years of Chinese history.

According to Shen Yun’s website, Shen Yun’s artists follow the noble tradition of looking toward the divine for inspiration. The spiritual connection is motivation for them to strive to excel, is the heart behind each movement of the dancer and each note of the musician. It is why audiences can feel there is something different about Shen Yun.

Here in San Diego, many Shen Yun fans appreciate the beauty and expression of Shen Yun so much that they consider Shen Yun a yearly must-see show for San Diegans.

Nuclear physicist John Oldham and his wife Shelley saw Shen Yun for the second time on March 2. Mr. Oldham especially likes the historical and spiritual aspects of Shen Yun and hopes to see more of these two elements in the future. “This show is unique. There is nothing like it anywhere else,” he said.

“I enjoy the dance and the history. I enjoy the lessons that they portray,” he said. “It’s nice to have a good balance.”

He also said he would definitely come back to see the performance, because “it’s one of the best shows in town. Nothing else is put on with this much culture.”

According to Shen Yun’s website, Shen Yun’s mini-drama pieces draw upon stories and legends that span China’s history. Many of the tales and characters depicted in Shen Yun dances draw inspiration from ancient and classic stories.

As a nuclear scientist, Mr. Oldham has done the math carefully and came to the conclusion that seeing Shen Yun’s mini-drama pieces is well worth the money.

If people go see other shows, they have the story told over about an hour and half, he explained.

“Here you have a story told every 5–10 minutes. And the color changes, the whole thing changes. So it’s very unique on that part. It’s very entertaining,” he added.

Bill Gold, a Catholic priest of the Diocese of San Diego, saw Shen Yun for the second time on Feb. 27. He said he likes to come back every year, adding that “It’s very worthwhile. People complained oftentimes that there’s no good entertainment to be had. This certainly is an example of fine entertainment.”

Joe Heard, a retired photographer with 30 years in television and motion pictures, saw Shen Yun for the fourth time on Feb. 27.

“People can go get a glass of wine, have dinner, spend a hundred bucks, and it’s all over in an hour. This is something you remember forever,” he said.

“Anyone that misses this—they have no idea what the world is all about. And I mean this shows it entirely,” he added.

Mr. Heard enjoys Shen Yun’s all new presentation each season. “Last year I would not have thought you could do any better. I thought it was great,” he said. “It brought tears to my eyes.”

Mr. Advincula said he loves classical Chinese dance and tradition. He also indicated that he would keep coming back to see the performance and would recommend it to everyone.

Julius Ickler, a retired aeronautical engineer and professor, and his wife Barbara, a retired teacher, came to see the performance for the fourth time on March 2.

After watching the performance this time, Mrs. Ickler was eager to find out if Shen Yun will be back to perform in the same theater.

When asked why they would keep coming back to see the show, Mr. Ickler said it’s because “the staging is wonderful and the performers are so talented.”

As for Mrs. Ickler, she replied, “Well, who can resist it?”