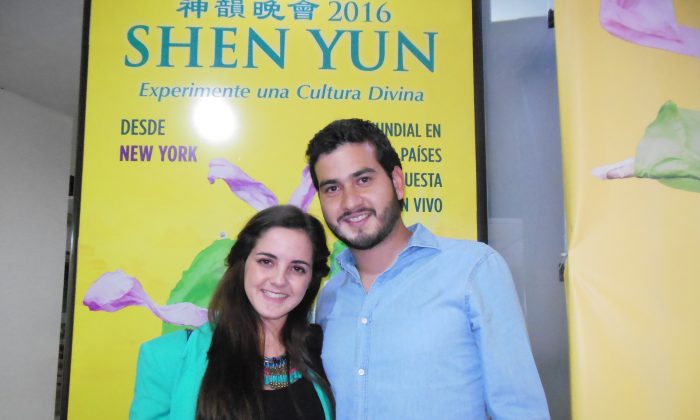 Martha Bravo and her companion at the Shen Yun performance at the Centro Cultural Teatro 1 in Mexico City on Feb. 26, 2016. (Sherry Dong/Epoch Times)

MEXICO CITY—For one weekend, residents of Mexico City were treated to 5,000 years of the divine Chinese culture, put on stage with an exhilarating performance at the Centro Cultural Teatro 1 from Feb 26 to 28.

Martha Bravo, a lawyer who saw Shen Yun on Feb. 26, is a regular patron of ballet. But seeing classical Chinese dance as presented by Shen Yun, which is a comprehensive dance system alongside ballet, was in her words an incredible experience for her.

“I love the ballet in general, but I never expected these kinds of movements, which are very fluid and unexpected at the same time. I liked it, it was very, very nice. There are no other words to describe it,” Ms. Bravo said.

Beside the artistry in the performance, the concepts and culture presented in the dance story lines and the musical performances stood out for Ms. Bravo.

“It was a show of beauty, peace, tranquility,” she said. “[Shen Yun is] a very peaceful, quiet beauty. It is like a natural, unforced beauty.”

She added that she was inspired to do better in the “quest to achieve spiritual perfection” after seeing the performance, which showcases ancient Chinese principles such as benevolence and justice, propriety and wisdom, respect for the heavens, and divine retribution.

Comedian Sergio Corona, who saw the performance on Feb. 27, said he was dazzled by Shen Yun.

“The choreography, the quality of the dancers, concentration, coordination, the movements, the music … everything makes it extraordinary,” said Mr. Corona, who is a veteran Mexican television and movie actor and comedian.

He added that it is hard to put into words the amazing performance that he experienced. “I cannot tell you what … divine things I felt … the dancers are divine—All of this surprised me, I cannot give an explanation of what that is,” he said.

‘A sense of elation’

Carolina López Hernández, secretary of promotion and culture with the union SNTISSTE, said she was impressed by the beauty and discipline of the performance.

“There is synchronicity between the spiritual and the material. You develop a sense of elation. My heart is beating a mile a minute with emotion,” she said.

My heart is beating a mile a minute with emotion.

Karina Balderas, who saw Shen Yun on Feb. 26, said what touched her the most in the performance was the importance of going “back to that spirituality, these universal human values shown and expressed through movement, dance, and music.”

Gustavo Pizano, assistant manager of a prominent Mexican radio station, said he was attracted to see Shen Yun as soon as he saw it advertised.

“The first soprano made me feel goosebumps,” he said, adding that the meaning of the lyrics, translated into Spanish and projected on the digital backdrop behind the vocalist, made the performance even more special. “I felt peace,” he said.

Shen Yun will continue its performances in Mexico in the city of Puebla on March 1.