Shen Yun ‘An artistic performance that deserves our support’ 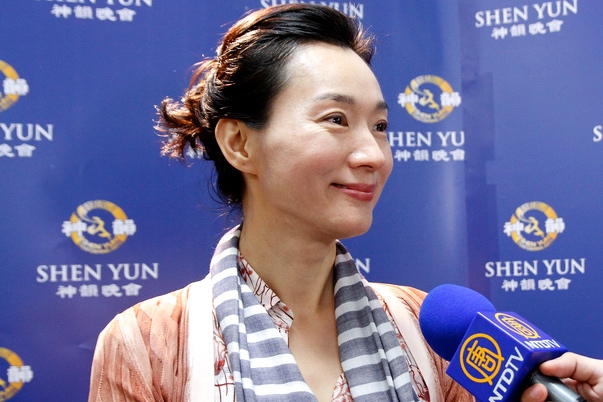 Captivated by the interactive backdrops, Ms. Tang said, “The design of animated backdrops is amazing. It was beyond my imagination that performers could disappear in front of the backdrops first, and then fly to the sky immediately. When they re-appeared again, they were connected with the backdrops seamlessly.”

“This show is an artistic feast combining the performance on the stage and the high-tech backdrops.”

Shen Yun, based in New York, brings classical Chinese dance to the world.

Ms. Tang spoke highly of the dancing performance, and said, “Both male and female dancers have a very good foundation and artistic senses.”

In addition, songs and instrumental pieces are interspersed between the dances.

Ms. Tang also enjoyed vocalist Tianling Song’s performance very much, noting, “I was surprised by the song sung by the female vocalist. Her voice is very elegant and graceful. Her way of singing as well as the content of songs is very special.”

“Conducting artistic performance by means of contemporary or (traditional) Chinese culture has long been what stage performers would like to do.

Classical Chinese dance is richly expressive. Hundreds of specific postures, expressions, and techniques combined with China’s deep cultural traditions make it a vast and independent system of dance, according to Shen Yun’s website. Shen Yun’s dancers are therefore able to depict scenes from any time period and setting.

“Every piece contains profound connotations. It (the show) is an artistic performance that deserves our support,” added Ms. Tang.

“Beauty is the only word that I can use to describe Shen Yun,” she said.

“The overall show is very beautiful. I’ve never seen such combination of dances, music and digital backdrops,” she continued.

“It’s very special. I thought that it would be nothing more than a dance performance. However, Shen Yun blends the dances with many stories,” her daughter said.

“In less than ten minutes each, Shen Yun dances recount ancient myths, bygone heroes, and celestial paradises. Whether set in the past or in contemporary China, every dance embodies traditional Chinese values.”

As a fan of cultural arts, Ms. Yang likes the elegant live music played by Shen Yun Orchestra composed of Eastern and Western musical instruments. “It made me feel like I was right in the scene. The feeling was very unique.”

Seeing Shen Yun perform classical Chinese dance based on historic legends and myths, Ms. Yang noted, “We learned about the story of Kong Ming [Capturing Arrows with Boats of Straw] when we were children. Shen Yun infuses the content of these stories into the performance … as if it took us back to the ancient time to experience the traditional culture. I had this kind of feeling.”

“Traditional Chinese culture is the core element of Shen Yun’s performances, featuring the ideas of loyalty, filial piety, benevolence, and affection. Westerners are curious about the 5,000 years of Chinese culture, so they can be inspired by the performance,” Ms. Yang said.

‘I was moved to tears’

Shen Yun “is a blend of Chinese history, culture, and performance, which is an art demonstrated by means of music, dance and animated digital backdrop. I feel its artistic level is very high,” said Ms. Liu Wenjun, director of TamShui Dance Theater, after she went to Shen Yun’s matinee along with a group of her students on the afternoon of April 5.

“With the dynamic backdrops, vibrant costumes and the seamless fusion of performers and plots, the performance is very vivid and touching,” she added.

“I believe that deep in these dancers’ hearts, there must be the beliefs in truthfulness, compassion and tolerance, so that they have a pure heart. That’s why the dances they perform are very pure. When seeing the piece The Power of Compassion, I was moved to tears. I felt that the power of compassion was overwhelming.”

“A pure heart is very important in performing dance. I think only Shen Yun performers can do that,” she said.

Ms. Liu admired Shen Yun’s devotion to promoting classical Chinese dance around the world. She explained, “In fact, our classic Chinese dance is very wonderful. I am truly thankful to Shen Yun for forming such momentum. It’s not something that can be easily done by ordinary groups. As you can see, the show has a full house for every performance. It’s not something that is easy to come by.”

She will consider embodying what she saw onstage into her own work.

“Not only should I teach dancing skills, but I should also pay attention to the connotations of traditional Chinese culture and inner morality.”