Shen Yun Amazes Audience Members of All Ages in Houston 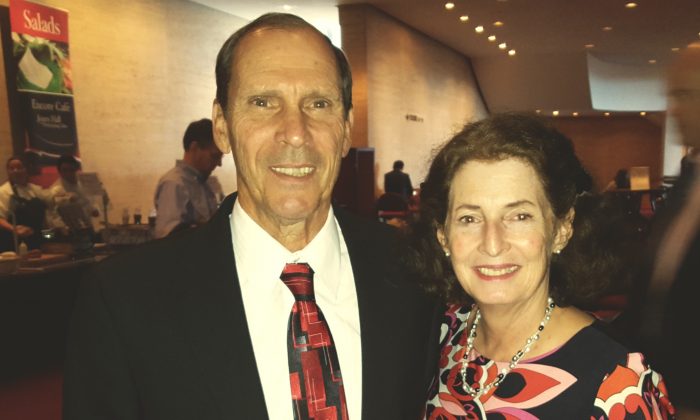 Mr. and Mrs. Reich were amazed by the dancing at Shen Yun Performing Arts at ones Hall for the Performing Arts, in Houston, on Dec. 23, 2015. (Courtesy of NTD Television)

HOUSTON—Shen Yun Performing Arts delighted audience members of all ages, from young to elderly, during its matinee performance at Houston’s Jones Hall for the Performing Arts on Dec. 23.

On the day before Christmas Eve, many families eagerly entered the doors of the theater with their children, excited to celebrate the holiday cheer with an exquisite performance of classical Chinese dance and music. And Shen Yun did not disappoint.

New York-based Shen Yun features a rich program combining classical Chinese dance, ethnic and folk dance, ancient Chinese stories and legends, a live orchestra uniting Eastern and Western instruments, and an animated backdrop, according to their website. By seamlessly uniting these various elements, Shen Yun had something to satisfy the myriad of different audience members.

The bright laughter and enthusiasm of children filled the theater throughout the performance, especially during the more comical numbers. In particular, “Monkey King and Dragon Palace,” inspired by the classic Chinese novel, “Journey to the West,” elicited giggles throughout the theater, as the crowd enjoyed Monkey King’s antics.

The Reich family came to see Shen Yun after hearing about the performance from their young daughters’ school chancellor.

Their younger daughter said excitedly, “It was really awesome!”

“I liked the singing!” she said, in reference to the bel canto soloists whose rich voices rang clearly throughout the theater.

About the dancers, she said, “I liked how they expressed the feeling without even talking, just by dancing.”

As the Shen Yun website states, “Classical Chinese dance is rich with expressive power. Through expression of bearing and form, beautiful dance movements bring out the inner meaning of intrinsic thoughts and feelings, reflecting the peculiarities of human nature.”

Mrs. Reich spoke about a dance that stood out for her: “Drums of the Grassland,” which featured the masculine and powerful movements of Mongolian men dancing on lush green grasslands. “That was amazing,” Mrs. Reich said, “We would like to get drums now for them—those kinds of drums.

Todd Reich, the father, appreciated the effect of the performance on his two daughters, who both dance and play musical instruments. “We loved that it exposed them to different cultures and to dance.”

But Shen Yun did not only excite and enrich the minds of families with young children. The retired couple Cathy Rankel and Rich Rankel, competitive disco dancers of 20 years, also overflowed with praises for Shen Yun.

“They were amazing, amazing,” Mrs. Rankel repeated. An avid hustle and disco dancer, Mrs. Rankel dances around three to four times a week.

She described the show as “very, very moving.” “I got very emotional,” she said. “We love Chinese culture and the dance and the arts.”

Mr. Rankel, a licensed real estate inspector as well as a retired teacher and engineer, felt similarly amazed by the performance. He said, having danced competitively himself, the dancers must have devoted so much time and passion to perfecting their art. “All those moves—it took them a lot of practice and a lot of hours to do that.”