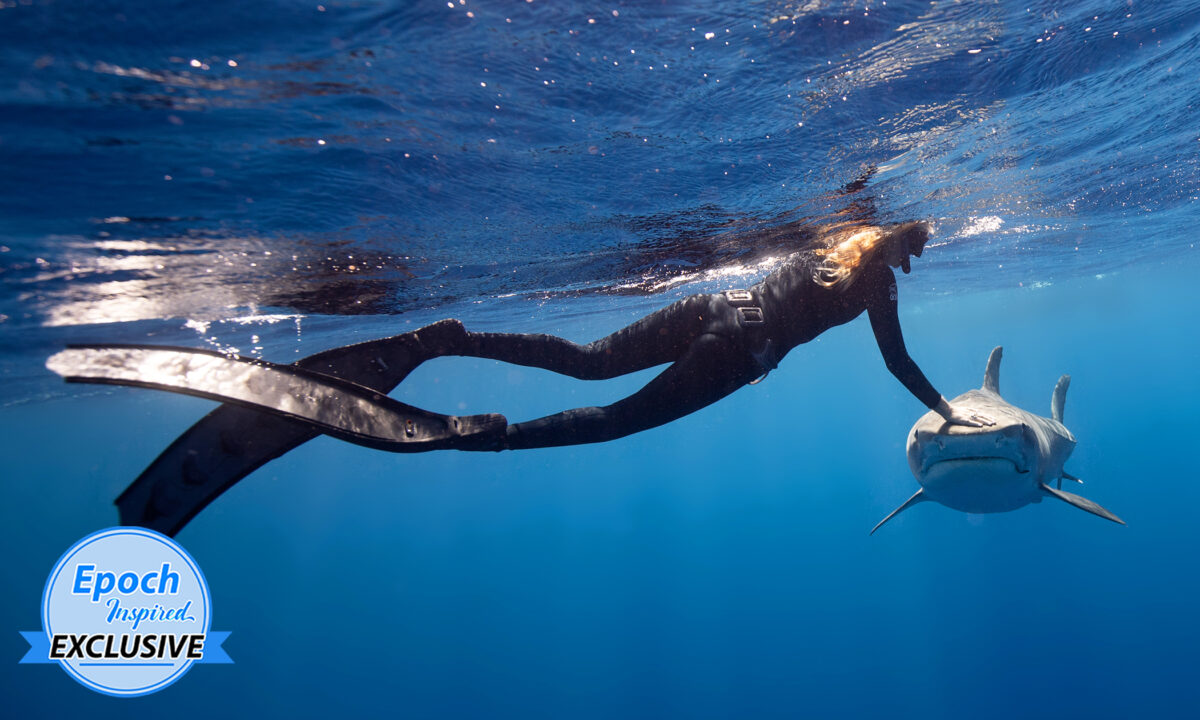 While swimming in the ocean, you might have wondered how you’d react if you encountered a shark. This 25-year-old shark diver and PADI master free diver, who’s based in Hawaii, shares her tips and also busts some common myths.

For Taylor Cunningham, 25, originally from Florida, water has played a huge role in her life; and she fell in love with the ocean from a really early age.

“I grew up as a competitive swimmer and so got really comfortable in the water,” Taylor told The Epoch Times.

She was also endowed with the opportunity to spend a lot of time in Hawaii as a child, where she was already exploring and experiencing the beauty of marine life. After studying marine science and biology at the University of Tampa, and doing shark-related research at the university, she was keen on spending time with them more in the water, which is what led her to be in Hawaii, entering the “shark world.”

Working as a guide for shark diving, Taylor said she has dived alongside sharks for almost six years now, but is currently focusing primarily on underwater photography and videography.

“I recently switched over to being more behind the camera, which I’ve been really enjoying,” she said.

Taylor mostly dives off the North Shore of Oahu and Holly Eva; she said that’s where most of the shark diving is.

“We have a really cool spot where there are these squalene species of Galapagos and sandbar sharks that have sort of called this area home,” Taylor said. “It’s a really unique spot that we’re able to go to and pretty regularly count on seeing sharks, which is fun for me.”

For Taylor, she didn’t possess this common fear of sharks that most people who haven’t spent time in the ocean, or who’ve never seen a shark before, would have, since she’d been exposed to them from an early age, having grown up in Florida.

“I was lucky my parents never showed me JAWS growing up,” Taylor said. “So I definitely didn’t think of them as these super scary monsters, but I was aware that they were big animals with sharp teeth, and I didn’t necessarily want to interact with them.”

Although she doesn’t remember her first shark dive really well because she was seasick, she said she was excited and found them to be really beautiful creatures.

When Taylor began interacting with sharks, she was lucky to be guided by some mentors who passed their experience and knowledge down to her.

Now, having spent a lot of time in the water with sharks, Taylor said she’s learned a lot about their behavior and temperament after observing them so closely.

Additionally, the sharks at the North Shore don’t migrate away so often, so the individuals she sees tend to be the same ones over and over again, and each seems to have their own quirks and personality.

This helps her to know when it’s time to hop out and give them the space until they’re ready to be around humans again. Through constant learning, she has come to realize not only how to keep herself safe, but also the people she guides.

In a video that has received over 75,000 reactions, Taylor shared her tips on what to do when you are approached by a shark. Firstly, she stressed that if you encounter a shark in the wild, they probably have nothing to do with you.

“Out of all of the times that I’ve seen a shark accidentally, while I’m in the ocean, pretty much always, they turn and they run the other way,” Taylor emphasized. “Sharks don’t really see us as a food source, especially a lot of those smaller, more coastal species. They’re not eating things that are our size.”

However, the tiger sharks, she said, are an exception.

In reality, Taylor said it’s highly unlikely that one will be approached by a shark in the wild.

“I would say, out of 100 dives, I see a shark maybe on five of those, you know, so it’s not super common,” Taylor said. “I always tell people, you don’t really need to be concerned about seeing sharks every single time you get in the ocean, but you know, it can happen. It’s always a possibility, right? It’s their home, that’s where they live.”

Here are some of Taylor’s tips in keeping safe when you see a shark in the wild:

In her post on Instagram, Taylor suggests not diving without a professional guide, and not attempting to touch, pet, or ride on sharks.

“Sharks are NOT puppy dogs! Sharks are NOT monsters! Sharks ARE incredibly capable apex predators that deserve respect,” Taylor wrote. “If you are in the water and a shark appears and you don’t feel comfortable staying in, calmly find a way to exit the water.”

Taylor told The Epoch Times that she thinks there’s always going to be a bit of a misconception about sharks.

“I think it’s a combination of things,” she said. “There’s definitely plenty of people that are still commenting like, ‘oh, man, that’s so scary.’ Or, ‘man, you should like try and punch the shark in the nose,’ you know, things like that are more based on that sort of movie knowledge.”

Trying to debunk these misconceptions as she shares pictures and videos on Instagram, Taylor has received a lot of positive feedback from people, many of whom tell her they feel better and more prepared now, and that they consider sharks to be beautiful creatures.

“I feel like the more information we can give people, the less likely they are to get really panicked or really nervous in a situation like that, to where it could be more dangerous than what it would really ever need to be,” Taylor said.

She also hopes that, through her effort, she is able to get more people to care for sharks.

“We’re losing them at such high rates, we need more people to care about them, we need more people willing to speak up for them,” she said. “Even if they don’t love them… I always tell people: I don’t need you to love sharks. But I do want you to understand how important they are.”