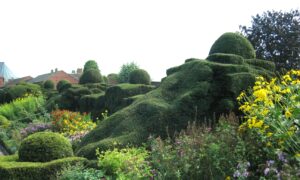 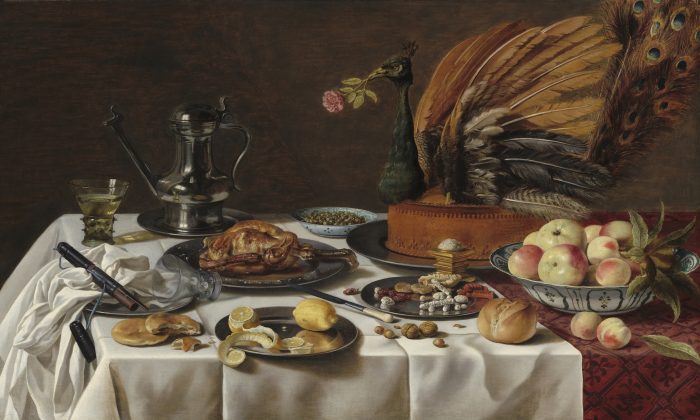 Here’s an entertaining tip from the pages of a 16th-century English cookbook: Bake a hollow deep-dish pie, and slip in a handful of live birds. That way, when your guest of honor cuts into it, the birds will fly out into the room and surely delight your dinner guests.

(If the birds are troublesome, the cookbook author might suggest, try substituting live snakes or frogs.)

Such was the kind of dish that William Shakespeare might have been served while attending feasts at the royal court or noblemen’s homes where his plays were performed.

“Just like some of his plays are so hilarious, back then, dinner … was really hilarious,” said Francine Segan, food historian and author of “Shakespeare’s Kitchen: Renaissance Recipes for the Contemporary Cook.” Hosts delighted in presenting amusing dishes meant to entertain—and guests were expected to reciprocate by preparing jokes for the occasion. Etiquette books of the time were full of suggestions.

In her book, Segan documents and reproduces recipes from Shakespeare’s time, drawn from extensive research into the foods and dining customs of the English Renaissance.

“I [wanted] to try to imagine, ‘What did Shakespeare eat?’” she said. She studied the dishes that would’ve been served at royal feasts during the height of his fame.

Shakespeare lived during the Elizabethan era (1558–1603), often considered the golden age of English history and the height of the English Renaissance. The wealthy indulged in lavish feasts held in the castle, rife with extravagant foods, live musicians, and performances between courses.

Guests were greeted by servants armed with pitchers of delicate chamomile- or rosemary-scented water to wash their hands, then were carefully escorted to their tables. Seating arrangements were strict. Even at the feast, “there was a hierarchy,” Segan said. Salt, for instance, was expensive and thus only graced the wealthiest tables, and the best, prettiest dishes were reserved for the richest.

Do Play With Your Food

Feasts were considered a form of entertainment, with amusement and presentation equally as important as taste. Chefs pulled out all the stops for the show.

“With every single course, there’d be something that was funny,” Segan said. That might be a roast suckling pig carrying a flag-bearing capon on its back.

Or it could be essentially an edible taxidermy swan swimming across the banquet table.

A chef might bake up a swan pie, and then top it with a roast swan carefully re-dressed with its skin and feathers. Once plated, servants would be sent under the table to slowly pull the platter, which was attached to a long chain, toward the guest of honor, as if the bird were swimming to him.

Salads were adorned with gilded bay leaves, pie crusts were embellished to hint at their fillings, and desserts were dyed vibrant colors with saffron or wine.

Meatballs, for instance, might be shaped into pears, garnished with sage “leaves,” and stuffed with whole grapes. Marzipan, bread, and cookies were formed into elaborate shapes, from fruits and animals to the crest of the guest of honor, or even a miniature of the guest of honor himself—the Elizabethan predecessor of our gingerbread men. Intricate replicas of the hosting castle predated our gingerbread houses, while sugar figurines of the king and queen atop desserts, made to honor them, gave rise to our bride and groom wedding cake toppers.

Some variations were more creative, if sometimes morbidly so. One, reserved for the wealthiest of guests, consisted of a dinner roll shaped like a deer and filled with red wine jelly. The insides would spill out in blood-like fashion when cut.

Amidst all the fanciful flourishes, though, flavor was not forgotten. Renaissance cooking was bold, and the ingredient lists were long and varied.

“They were big into meats,” Segan said, including all sorts of wild game and fancy fowl. Aside from swan, there were also venison, rabbit, boar, peacock, pigeon, and even seal. No part of an animal went to waste—hooves, udders, and cockscombs were all fair game. And cookbooks had entire sections dedicated to preparing “head of beast.”

With Shakespeare’s time predating imports from the New World, products like chocolate, corn, potatoes, and tomatoes had yet to make it to English pantries. But they weren’t missed. Pasta, for instance, wildly popular even without the classic tomato sauce we know, was mixed with butter and Grana Padano cheese from Italy or sauced with savory stewed fruit: earthy figs, berries, or prunes slow-simmered in red wine.

Meanwhile, spices like mace, cloves, cinnamon, and black pepper abounded, contributing depth and extra punch to everything from meats to sweets.

Spices less familiar to us—but still available in specialty markets today—included cubeb, long pepper, and grains of paradise, all heavily prized and used liberally in meat dishes. Segan describes them as next-level peppers of sorts, with a familiar heat and peppery notes, but a deeper complexity and more layers of flavor. Cubeb, Segan’s personal favorite, teases hints of cinnamon and nutmeg.

And when it comes to these bold aromatics, there’s a myth Segan wants to bust: that in a time of no refrigeration, Elizabethan cooks only went heavy on the spices to cover up rancid meat.

A survey of cookbooks proves otherwise. Many recipes included meticulous instructions on the timing of food preparation, such as how many hours in advance to slaughter an animal before an intended feast so that rotten meat was out of the question.

Spices also weren’t cheap. According to Segan, two heads of nutmeg could cost as much as a skilled carpenter made in a week. Chefs would never waste such precious ingredients on rotten meat; they had to know what they were doing.

For more evidence of such mastery, look to desserts. All kinds of interesting ingredients made their way into Elizabethan sweets, like saffron, rose petals, and, very commonly, black pepper. Segan gushed over candied orange peels simmered in a bit of vinegar and pepper, and a four-ingredient cookie consisting of only almonds, honey, flour, and black pepper. The bite of the pepper riffs beautifully off the sweetness of the honey, Segan said, forming a complex flavor profile that’s rather “Top Chef-y” for a 500-year-old recipe.

Across all courses, cooks were by no means shy about experimenting with flavors. One of the recipes in Segan’s cookbook is a fish pie with an unusual filling: a medley of salmon, oysters, grapes, pistachios, and asparagus.

“This is an example of how crazy these people were. They’re mixing so many flavors,” Segan recalled thinking when she was testing recipes for the book. “This is going to be like mud.”

She dared only make one to serve her guests, as nothing more than an amusing demonstration—but everybody asked for more. To her surprise, the pie was a delicious hit. There was a method to their madness after all.

A Page From History

Just as Shakespeare’s plays have endured throughout the ages, so have elements of Elizabethan cooking.

Much of their feast food has persisted as our holiday fare, carried over to America by English settlers. Turkey with oyster stuffing is “totally Elizabethan,” Segan said, and while cranberry sauce is distinctly American, it may have taken inspiration from the other fruit sauces that Elizabethans commonly ate with meat.

Meanwhile, we see echoes of the Elizabethan affinity for crafting food into figures in the traditions of marzipan sculpting found across the world.

Some elements go beyond the food, too. Our custom of making a toast, for instance, has Elizabethan origins: The English used to drop a piece of bread into their wine before drinking, to filter out impurities absorbed from the wooden casks in which wine was imported from Southern Europe. The practice gave rise to the expression “drink to the toast”—the bottom of the glass—which then evolved into our act of making a “toast.”

And much of the Elizabethans’ feasting philosophy still holds true: a meal should be entertaining, a time to celebrate and indulge in good food and laughter alike.

Though perhaps the re-feathered swans and surprise snake pies are best left to the history (cook)books.

In honor of Shakespeare’s birthday on April 23, Francine Segan will be giving a talk, “Shakespeare’s Kitchen: Elizabethan Daily Life in Food,” on the food, etiquette, and dining customs of the bard’s time. Samples of Elizabethan eats and entertainment—the bawdy jokes and riddles told between courses—will both be served.