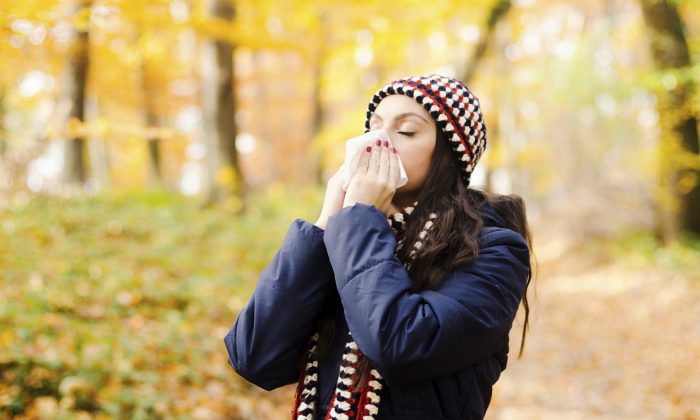 Have you been told your allergies or frequent colds are just something you have to live with? (Martin Cvetković/iStock)
Mind & Body

If you or someone you know suffers from both allergies and frequent colds, you probably know that the symptoms can be very similar—a stuffy or runny nose, sneezing, and watery eyes.

What most people don’t know is that both colds and allergies are a type of condition called rhinitis. Rhinitis is a set of symptoms due to inflammation of the mucus membrane in the nose.

In allergic rhinitis, symptoms are set off by the immune system’s overreaction to normally harmless substances. The common cold is a type of non-allergic rhinitis called viral rhinitis, when symptoms occur because of infection by a virus.

Allergic rhinitis affects around 50 million people in the United States, according to the American College of Asthma, Allergy and Immunology. Although there are no definitive statistics on non-allergic rhinitis, it is estimated to affect millions and is one of the most common conditions diagnosed by primary-care and ear, nose, and throat doctors.

While the symptoms of rhinitis are usually not life-threatening, they can greatly decrease quality of life and cause missed work and school.

What is truly regrettable for patients who suffer chronically from some form of rhinitis is that many doctors believe it is incurable. But I have found that it is curable, and I will explain how below.

Why Many Treatments Don’t Work

Modern medicine treats rhinitis differently depending on whether it is allergic or non-allergic, but the root of both lies in the reactions of the immune system, so I treat both in the same way using Korean medicine.

Because the common cold virus has mutated to produce more than 200 different types, there is no way to vaccinate against it. Flu vaccinations are possible because there are fewer strains of the flu virus. Vaccinations train the immune system to recognize the injected virus, so it will be able to fight the same virus if it encounters it later.

However, whether you become infected with the common cold or flu virus, if the immune system is healthy and strong, there is no need to train it in advance, and it will still be able to fight infection.

But if the immune system is weak, and the common cold is not treated properly, the virus will establish itself in the body causing your stuffy nose and other uncomfortable symptoms.

Although the number of patients who see doctors because of rhinitis associated with viral infections or allergies is increasing every year, and doctors are treating them, only a very small number of patients are completely cured of their ailments. This is because treatments are aimed at alleviating symptoms without treating the fundamental cause.

Typical treatment for allergies involves the recommendation that you avoid substances that trigger allergic reactions. For symptoms like nasal discharge and sneezing, you may be given antihistamines or steroids to suppress them.

However, such treatment can only alleviate the symptoms for a short period of time.

Some doctors say that symptoms associated with rhinitis cannot be cured but only managed. However, I can say confidently that they can be fully cured.

In addition, antihistamines and steroids have a serious risk of side effects. Although antihistamines are weaker than steroids, patients can build up resistance to them if they are used repeatedly.

Steroids are prescribed to promptly alleviate symptoms due to rhinitis. However, steroids suppress the discharge of substances that actually need to be discarded and pushes them deeper into the body. Accordingly, using steroids will turn the body into a storage tank for waste matter.

Thus, health is not truly restored, and the patient will live in a cycle of recurring pain and temporary alleviation of symptoms. Because modern medicine is busy getting rid of symptoms, it does not solve the fundamental cause of the problem.

In order to fundamentally solve the problem, the root cause in the immune system must be properly understood and eliminated.

Some doctors say that symptoms associated with rhinitis cannot be cured but only managed. However, I can say confidently that they can be fully cured. In fact, they can be cured very well.

I found that the solution lies in the health of the lungs. At first glance, it may not be evident how allergies and colds are affected by the lungs; however, their relationship can be understood easily if you understand how the lungs influence different parts of the body.

Healthy lungs restore the health of the tonsils, which in turn are associated with the restoration and fortification of immunity. By strengthening the lungs, I have had many patients who often suffered from rhinitis symptoms, not only have their symptoms relieved but never have a recurrence of their problem.

When patients like these undergo treatment for more than five months with Korean herbal medicine aimed at fortifying the lungs, their stuffy nose as well as other other respiratory diseases, such as asthma, will also not recur thereafter. This is possible when the health of the tonsils is restored through the reinforcement of pulmonary functions.

When the nose is blocked, people will naturally breathe through their mouths, which can cause the tonsils to become infected and swell.

The tonsils play a more central role in the immune system than most people imagine.

The tonsils are a pair of soft tissue masses that are part of the lymph system. Their location in the throat is very important because the throat is the passage that leads to the cardiovascular system. The tonsils situated in this passage help the immune system by producing antibodies.

Let Your Body Heal Itself

When the tonsils are healthy, this will also restore the discriminatory ability of the immune system, and substances that previously induced allergies will no longer affect you.

For example, hypersensitive reactions to flower pollen, dust in the home, or particular foods are the result of degradation in the discriminatory ability of the immune system.

Simply avoiding substances that induce allergies is not the best way of treating them. On the contrary, it is important to enable the body to recognize such substances as safe and not to overreact to them.

Thus, fundamental to treating all types of rhinitis is creating the best conditions for white blood cells to protect the body from external attacks, which begins with restoring pulmonary function.

Pulmonary function can be fortified through aerobic exercise, such as mountain climbing, swimming, and cycling, as well as treatments with Korean herbal aimed at purifying the lungs.

After four months, symptoms such as nasal discharge; sneezing; stuffy nose; post-nasal drip; coughing; phlegm; and itchiness in the nose, eyes, ears, and roof of the mouth can be alleviated, and people can even see improvement in asthma at this time.

With this treatment, the body plays the principal role and a cure is possible.

Dr. Seo Hyo-seok is the director of the Pyunkang Korean Medicine Hospital, which has seven branches in South Korea, one at Stanton University in California, and one in Atlanta. Dr. Seo entered Kyung Hee University in Korea at the top of his class and developed the Pyunkang-Hwan herbal formula, which improves immunity by strengthening lung function. The formula has helped cure over 155,000 patients of various conditions.