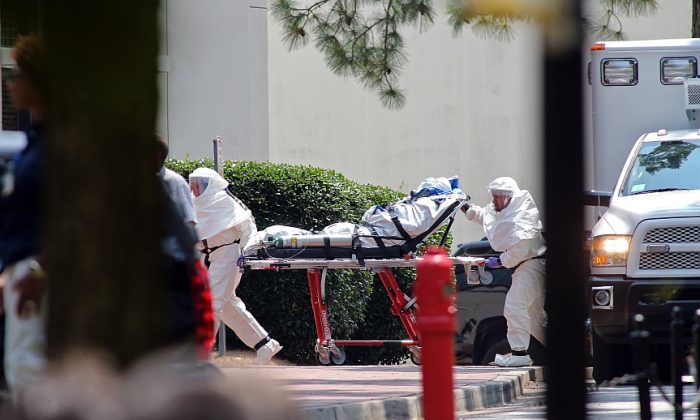 Nancy Writebol, an American aid worker from North Carolina who was infected with the Ebola virus while working in Liberia, arrives at Emory University Hospital in Atlanta, Tuesday. (The Journal & Constitution, John Spink/AP)
Ebola

Unlike her colleague and fellow patient, Dr. Kent Brantly, she did not walk from the ambulance. She lay on a gurney, with an oxygen tank by her side. “Nancy has arrived safely,” said Bruce Johnson, president of SIM USA. For a moment he could not speak, appearing to be close to tears.

“There is an age difference,” said Johnson.

Johnson knows and admires both Ebola sufferers, who have been working in Liberia since 2013. He said he spoke to Writebol’s husband, David, still in Liberia, and he said she was very weak, yet showing slow improvement. “A week ago, we were thinking about making funeral arrangements for Nancy. Now we have a real reason to be hopeful,” said David Writebol, according to Johnson.

She was able to eat some yogurt today, which is a very good sign, reported Johnson.

The Gift of Helps

No one knows exactly how the two became infected. It is being investigated. According to Johnson, they followed and exceeded protocols recommended by the Centers for Disease Control to prevent infection. Writebol’s job is not medical. Her title is personnel coordinator. “Both of them have gifts and abilities,” said Johnson. “Nancy had the gift of helps—how can I help?” was the question she always asked.

“We asked the CDC for a full review of protocols,” said Johnson. But during the crisis in Liberia, “it’s all hands on deck.” Writebol had been helping spray down hazmat suits with disinfectant. “Even a household bleach solution can kill Ebola,” said Johnson.

As for the experimental drug, which Writebol started taking in Liberia, he was not able to go into detail. “I’m not a medical person, sorry.”

The drug is ZMapp. It was developed with U.S. military funding by Mapp Biopharmaceutical Inc., a San Diego company, using antibodies harvested from lab animals that had been injected with parts of the Ebola virus. Tobacco plants in Kentucky are being used to make the treatment.

It works by boosting the immune system’s efforts to fight the virus. The U.S. Defense Threat Reduction Agency announced last month that it is providing more funding to speed the drug’s development.

It’s impossible to know whether the drug saved these workers, CDC Director Tom Frieden said. “Every medicine has risks and benefits,” he said to reporters at a health symposium in Kentucky. “Until we do a study, we don’t know if it helps, if it hurts, or if it doesn’t make any difference.”

If the treatment works, it could create pressure to speed through testing and production to help contain the disease in Africa. The current outbreak kills 60 percent of infected people. Past outbreaks have killed 90 percent.

According to the CDC “Experimental treatments have been tested and proven effective in animal models but has not yet been used in humans.”

Johnson said the decision to try the new treatment was made between the patients and their doctors. The decision of who flew to America first was made the same way.

The decision to come to America at all was a multipronged one. It was “quite a coordinated effort,” said Johnson. The CDC, Emory University, the State Department, and the military, which created the one-of-a-kind medical aircraft, all had parts to play. “At first we were not planning to evacuate them. They were receiving excellent care—this all happened last week,” said Johnson.

“We needed a hospital in the U.S. with the capability and willingness to accept the first Ebola patient to the U.S.,” said Johnson.

Speaking of the criticism about the decision to bring them here, Johnson said he hopes the press will try to educate the public and allay its fears. Ebola is not easily communicable. In a country with a strong medical infrastructure, like this one, it could be defeated.

“There are 50 Liberian doctors for 4 million people. We are working with partners to train more doctors there.” In Liberia, his group has been broadcasting information on the radio to counteract people’s misinformation.

Johnson said David Writebol asked, “What if this led to a cure?” If that were the outcome, both Writebol and Brantly would be willing to go through their ordeal again, he said.

SIM is a Christian mission with nearly 3,000 workers in more than 65 countries. It partners with Samaritan’s Purse. SIM stood for Sudan Interior Mission when it was founded 120 years ago, according to its website.