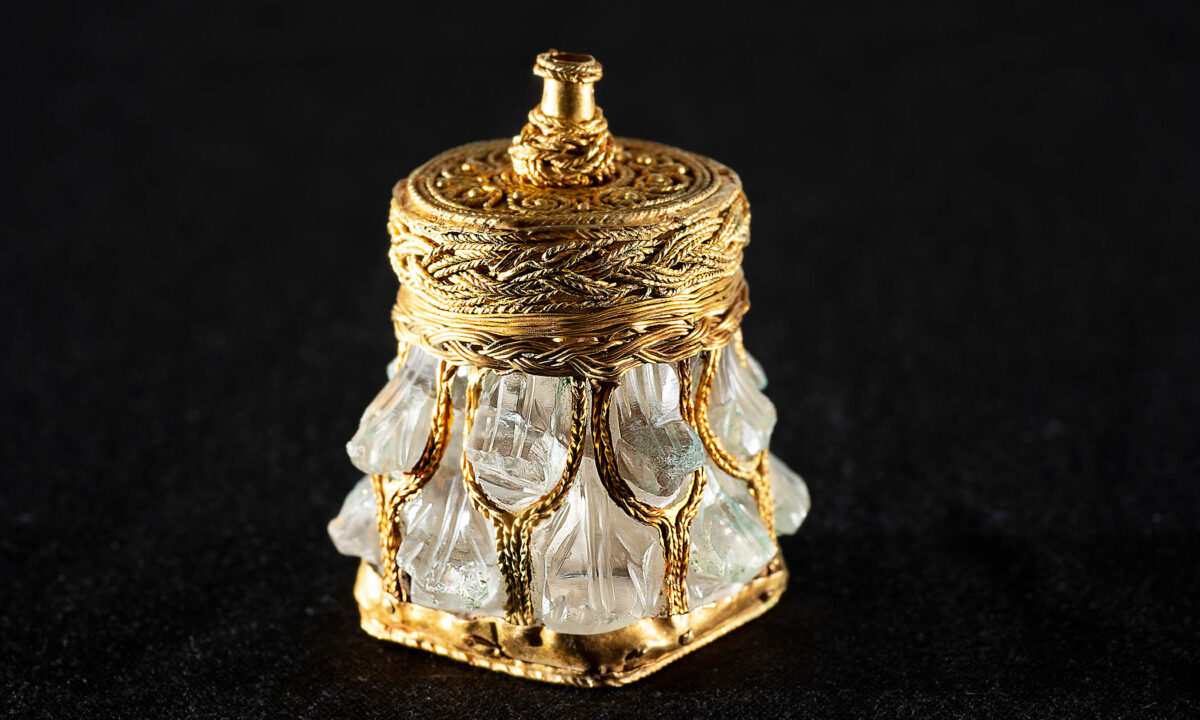 Nearly nine years after a metal detectorist in Scotland first stumbled on the largest hoard of Viking-age treasure ever unearthed in Britain or Ireland, its contents continue to yield new discoveries in the hands of researchers.

The Galloway Hoard, found in 2014 by one Derrick McLennan from Ayrshire, consists of over 100 gold, silver, crystal, stone, glass, and earthen objects from the Viking age (a period from around A.D. 800 to 1050). In this trove, consisting of objects from as far away as the Middle East and Central Asia, was found a mysterious clump of wrapped, extremely fragile and rarely surviving textiles, through which could only partially be observed an object made of rock crystal and gold.

The entire treasure, uncovered on glebelands owned by the Church of Scotland, is currently on display at Kirkcudbright Galleries in Dumfries and Galloway, which features this exciting new reveal.

The object was examined with 3D X-ray, allowing researchers to see what it looks like under the wrapping without damaging it. The artifact has since been unwrapped and identified as a rock crystal jar, measuring 5 cm high and resembling an ornate perfume bottle. It is wrapped in gold with a gold inscription on the base, which reads: “Bishop Hyguald had me made.”

The jar is believed to have belonged to an ecclesiastic.

“The inscription is in Latin, which was the universal language of the Western Church in those days,” said Professor Alex Woolf, senior lecturer at the University of St. Andrews. “The sources and records of the period are incomplete, but what we do know from them is that there were several ecclesiastics in early Medieval Northumbria with the name Hyguald.”

He added: “We don’t know of a Bishop Hyguald, specifically, but our lists of Northumbrian bishops are incomplete after 810. It is accordingly—and frustratingly—difficult to be more precise but it may well be that what we’re looking at is an otherwise undocumented mid-9th-century bishop of either Whithorn or Hexham.”

The inscription is the “clearest evidence that some of the material in the hoard may have come from a church in the Anglo-Saxon kingdom of Northumbria,” National Museums Scotland stated in a press release. That kingdom included Dumfries and Galloway and stretched as far north as Edinburgh and as far south as Sheffield.

Carved artifacts like this rock crystal jar have been observed before. One researcher surmises that the jar was repurposed after serving a different function.

“It looks, from the carved surface of the Galloway Hoard rock crystal, that this was once the capital of a Corinthian-style crystal column,” said Dr. Martin Goldberg, principal curator of Medieval Archaeology & History at National Museums Scotland. “This is unique in early medieval Britain but there are parallels within the Roman Empire for objects of this type.

“The ones that I have seen are in the Vatican collection, where there are different forms of carved crystal columns. And so it was maybe 500 years old by the time it was transformed in the late-8th or early-9th century into a gold-wrapped jar.”

Such superior craftsmanship exhibited in this jar opens the possibility that it was made in an ecclesiastic workshop of some kind. The precious materials, too, were highly valued in those days and might have held spiritual significance of some kind.

“Rock crystal is unusual in itself,” said Dr. Leslie Webster, former keeper of Britain prehistory in Europe at the British Museum. “It is one of those materials that was greatly prized in the antique world, for its transparency and translucency, and so it’s associated with purity. So it was, I think even in its time, very, very special.”

She added: “And you can see from the way that the gold almost enshrines it, it’s made into a sort of relic. It’s a showcasing piece from a very high-status workshop, such as one that you might expect a bishop to have in one of his monasteries. This object is absolutely fascinating. I’ve seen a lot of Anglo-Saxon finds over the years in my professional career, some of them amazing. But this absolutely knocks them all into a cocked hat.”

The exhibition “Galloway Hoard: Viking-age Treasure” is currently open at Kirkcudbright Galleries and runs until July 10, 2022. It will then show at Aberdeen Art Gallery from July 30 to Oct. 23. Additionally, a new film showcasing the rock crystal jar with the inscription will be featured from Dec. 20.

The treasure will eventually be put on long-term display at the National Museum of Scotland in Edinburgh, with a representative portion being shown long term at Kirkcudbright Galleries.