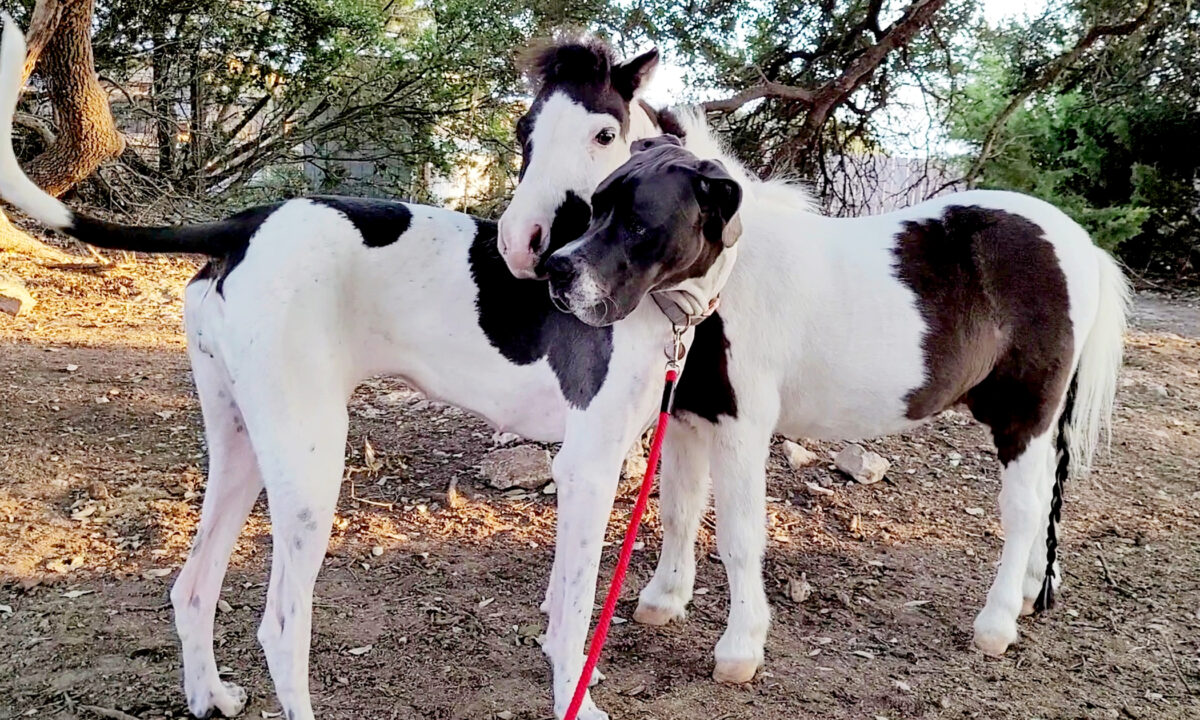 (Courtesy of The Cre8ive Chick)
Animals

A miniature horse and a Great Dane, who share more than just their home on a small farm in Texas, have become the firmest of friends. The unlikely pair, who are almost the same size and have matching marks, are so similar that people can’t tell them apart.

Great Dane puppy Skye, 1, and 12-year-old American miniature horse Hot Fudge Sundae are owned by Ilonka Margis and her husband, who stay on a couple of acres of land in the central Texas countryside with many animal residents.

“Others would probably consider it a small backyard farm; to us, they’re family members,” Ilonka, 40, told The Epoch Times.

Ilonka chronicles her daily life on the farm on Instagram, where Skye and Fudge are often the stars of the show.

However, when Skye first arrived—a perfectly timed replacement for the family’s beloved first Great Dane, Taz, who died at almost age 11 in May 2020—her nerves got the better of her.

“Skye was the tiniest little runt of the litter,” Ilonka recalled. “She was only a fraction of the size of her siblings and didn’t have the greatest chance at survival. But she thrived and moved in with us in December of 2020 when she was 9 weeks young.”

Initially, when Skye was first introduced to the horses and cats, she was quite scared.

“If I held her while walking towards one of the horses, she would just turn her head and try to hide her face in my jacket,” Ilonka said.

Yet, Skye warmed up to the horses quickly, and with Fudge in particular, “probably because a young, silly puppy and a goofy gelding are a great mix,” said Ilonka.

Over the course of time, Skye and Fudge’s friendship has evolved. According to Ilonka, the pair love to hang out and hug each other. As geldings love to play, Fudge, too, enjoys playing with Skye just like he would play with any other horse.

Skye is also Fudge’s shadow, walking alongside the horse in his riding arena or trotting beside him when he is in the miniature cart. They both also keep up with each other better than with Ilonka.

Witnessing their unique friendship, Ilonka said: “People think they’re adorable, and so do I.”

“I’ve seen firsthand in our home how different species—despite being scared or even terrified at first—can become friends, from chickens to cats, dogs, and horses,” she added.

Ilonka grew up on a family farm in a small town in southwestern Germany. She learned to ride as she learned to walk, and can’t imagine a life without animals.

Once a business owner making cakes and cupcake bouquets, Ilonka’s time was soon consumed by the demands of the farm in Texas. Unable to dedicate her time to the creative cakes, the artist now, instead, sells her designs, from decals to T-shirts, mugs, and sewing patterns that she works on in the mornings before feeding time.

The inhabitants of the farm are many.

Ilonka keeps two riding horses, as both she and her daughter like to ride. Her American miniatures Fudge and Hexe—who was rescued as a starving 10-month-old and nursed back to health—are driving horses that perform in-hand jumping and dressage.

Spot a Rocket is Ilonka’s American paint horse, now a happy retiree due to a genetic disease. Meanwhile, Gallagher, a Friesian, whom Ilonka describes as her “heart horse,” is always jealous when she spends time with other horses.

Fudge on the other hand was a surprise addition in 2017. With her husband and son out of town, Ilonka drove five hours north to bring him home, where Hexe became his mentor. “My husband was surprised upon returning from his trip that the ‘hot fudge sundae’ I told him I had gotten for myself was, in fact, not the dessert kind!” she joked.

Fudge, according to Ilonka, has grown to be a little troublemaker and barn clown who enjoys doing all things funny, such as breaking through barriers, getting himself stuck in thorny bushes, and even getting mad and flipping his mane when he gets his breakfast late.

“Owning these animals is a lifestyle, and not always as fun as it looks on social media,” Ilonka reflected. “I’m up at the crack of dawn, there’s no sleeping in or spontaneous vacations, feeding and taking care of them daily is a must, regardless of freezing temperatures … or 110-degree Fahrenheit heat.”

Describing her daily challenges at the farm, Ilonka further added: “There’s always something that needs to be fixed or one who requires special attention or has a medical need or emergency. The work seems to never end. Luckily, my husband and I have learned to build and make just about anything ourselves … we’re a great team.”

Despite dealing with all the difficulties of caring for the animals, Ilonka claims she wouldn’t trade her life for anything in this world.

“These animals give back so much; the rewards are priceless,” she said.