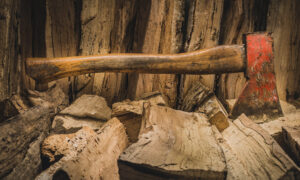 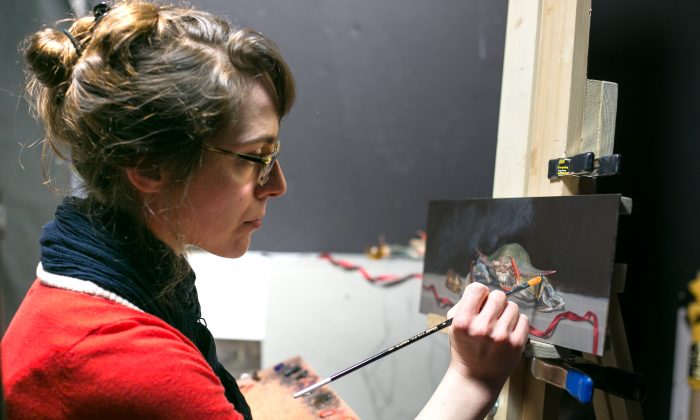 A glimpse into the atelier art movement
By Milene Fernandez

NEW YORK—When she paints, Sally Fama Cochrane dives into the chasm between invisible and visible worlds—between the inside and the outside of the body, between numbers and emotions, between cold analysis and comforting storytelling. While some old masters painted allegories of time, wisdom, faith, and themes imbued with Greek mythology or religious morals, Cochrane creates her own allegories inspired by a predominant paradigm of this century—science and medicine.

Everything she paints has a specific meaning. “I’m interested in everything. My brain is a cabinet of curiosities where I file things that I notice and can bring out later when needed,” said Cochrane about her creative process at Grand Central Atelier where she works as an artist in residence. “I’m a very analytical person, I like data and numbers,” she said somewhat bashfully, as if admitting that liking statistics is quite unusual among visual artists.

When asked how artistry plays into her work, she spoke of using representational techniques to communicate an emotional personal narrative.

She recently completed a diptych of the two most common female cancers, breast and ovarian cancer, currently on display at the Eleventh Street Arts gallery. After reading Siddhartha Mukherjee’s biography of cancer, “The Emperor of All Maladies,” she was inspired to create an allegory with a bakery scene to visually represent those cancers.

“So much of the feminine identity is associated with caretaking. The bread baker is the person who feeds the family, the caretaker. The BRCA gene, which makes women predisposed to breast and ovarian cancer, is actually called a caretaker gene. When the BRCA gene is mutated, it stops taking care of the genome,” Cochrane explained.

The woman on the left side of the diptych that represents breast cancer carries a loaf of bread cut in half on a tray at chest level, reminiscent of paintings of Saint Agatha. The holes in the bread look like a mammogram. The woman on the right side of the diptych that represents ovarian cancer stands next to broken eggs on the floor. Residue of dough that she has wiped on her apron has a pattern similar to that of an ultrasound image—symbolism abounds.

The idiosyncratic, cryptic messages Cochrane infuses in her paintings invite intrigue. Her paintings are like puzzles to be deciphered and her answers to the puzzles can be found in the descriptions she provides on her website. Still she does not want her paintings to be just a collection of symbols. She’s constantly trying to find a balance between what might look too obvious and too subtle in her allegories.

“I also want the overall composition to have an emotive quality that summarizes the theme, so that even if you can’t figure out the symbols, you’ll get a feeling of what the painting is about,” she said. She wants to give that pleasurable sense of discovery to the viewer.

She’s fascinated by the stories that doctors tell their patients to explain something that they and scientists are still struggling to fully understand. “It’s all this microscopic stuff that you have to imagine, and it’s the story that is supposed to explain what is happening to you on the macroscopic level,” she said.

She experienced a chasm—between the reality of what is happening in the body and what doctors could not fully explain—when she suffered from a rare disease, called Eosinophilic Esophagitis. Her esophagus would become inflamed and she could not swallow food for days. It took 10 years for doctors to figure out the diagnosis.

“Science and medicine is not this grand edifice of truth that we have been marching toward through history,” Cochrane said. It is a paradigm where there are things that are accepted but then there are anomalies and we create stories to explain why something does not work. “You can look at the data and the numbers, but on the other hand the doctors’ explanation of where those numbers came from is storytelling. You notice that firsthand when you have a hard-to-diagnose and -to-treat disease,” she said.

Before studying at Grand Central Atelier, Cochrane completed a bachelor’s degree in the history and philosophy of science, focusing on the study of perception and the history of psychology. She called representative art as possibly the most objective kind of art in existence.

“My personal take of what we do here [at GCA] is that, it is a technology. Technology is an applied science, applied to an industry. And if you consider the industry to be fulfilling the demand for representational imitative pictures, what we study so hard at is applying the science of the physics of light and perceptual psychology to fulfilling that demand, so it is kind of a technology in its goal of representing something realistically,” she said.

“There is this goal and we can all see when we have come closer to the goal or gotten further away from it,” she added.

For her the process of trying to paint things as accurately as they look is 80 percent painful struggle and 20 percent delightful breakthroughs. “I’ll spend two hours on a painting and it is only in the last moments that I accidentally put down some little brushstroke that suddenly makes what I’m representing look very real and I’ll figure out why. That’s so fulfilling,” she said.

Another artist at the atelier mentioned that Cochrane is the go-to-person for explaining the practicalities, from how much medium to use when mixing paint to giving a systematic explanation for why it is better to paint from life than from a photograph.

“The camera incorporates perspective distortions that we don’t notice, but if you try to draw them, you will notice it. For example, just a slight tilt of the camera will cause the forehead or the chin to look too big,” she said.

Also the camera can only capture a limited amount of light and color values, and when the photograph is printed even less information is captured. “If you are copying values from a two-dimensional photo you tend to just copy from flat to flat and then the painting will look flat too. The benefit of working from life is that it constantly reminds you that what you are painting is three-dimensional and then your painting will look three-dimensional,” she said.

She explained further that our brains overcome the distortions of the projected image on our retina because we know how a three-dimensional object looks. That’s how an artist painting from life can make a drawing or a painting look more realistic and not make it look like a photograph.

Since childhood, Cochrane has held a strong conviction that she still holds dear today.

“I know this is irrational, but I’ve always thought that painting was the most important thing that humans did. … I don’t know where it came from, but I had assumed that everyone else thought that too,” she said chuckling.

She would find the significance of historical events based on the lives of artists. “I could only remember what the Counter-Reformation and Council of Trent were about on tests in European history class by remembering the works of Bernini and Caravaggio,” she said.

When she was about 13 years old she made one of her first paintings of her late grandfather, Eric Cochrane, who was a historian, as Saint Jerome.  She included her grandfather’s golden retriever in the painting and bushed out the dog’s hair to look like the lion that Saint Jerome took the thorn out of its paw. “That painting has a black background because I was looking at a lot at Caravaggio paintings,” she said chuckling. More recently she completed a portrait of her other grandfather, Eugene Fama, a Nobel laureate in economics.

When she turned 18, she finally realized that not everyone thought painting was so important. She noticed her friends deciding to study law, medicine, and various other fields in college without worrying about not having enough time to paint. She went ahead to study art history initially but found it discouraging.

“The art history classes I took seemed too descriptive, they emphasized and rested too much on what previous art historians had said. Everyone talks about Botticelli’s line, but it didn’t feel like anyone had actually looked at it and actually described what that meant versus another line,” she said.

She switched to studying the history and philosophy of science and completed that degree with honors at the University of Chicago. That field appealed to her because it blended her interest in perception, and how we have come to understand perception, with the history of science.  It was more in tune with her analytical way of thinking. At the same time she took fine art classes part time—staying on course with what she feels is most important.

“Creating representational art combines everything about the privilege of what it is to be human, which is consciousness and self reflection, the ability to perceive the outside world and then reflect upon it, the ability to tell stories and remember stories. … It feels like one of the richest human endeavors to me because it combines all of these things,” she said.

Like looking at a Caravaggio, you can go back to the same painting again and again, decade after decade and get more out of it every time. “It’s just very human,” Cochrane said.

Cochrane work is currently on view in a group show at Eleventh Street Arts gallery in Long Island City, New York until June 3.