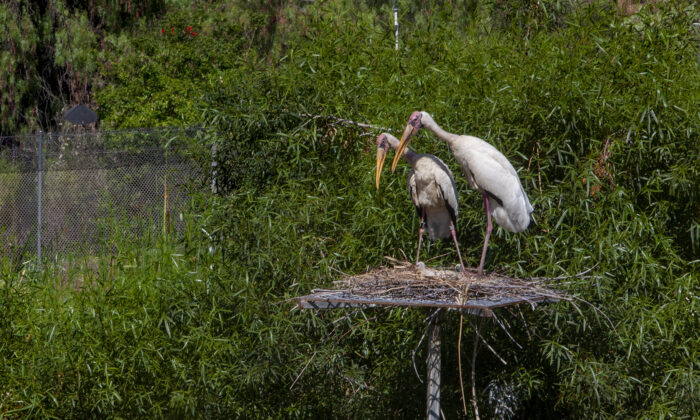 By Gary Warth
From The San Diego Union-Tribune

ESCONDIDO, Calif.—About 120 birds at San Diego Zoo Safari Park were moved to new protected habitats at Safari Park last week and more will be relocated in the next few weeks in response to a highly contagious strain of avian flu that recently was detected in California.

“There was a little squabbling here and there, but that’s what we’d expect,” bird curator Andrew Stehly said about the animals’ reaction to the move, which he said has gone smoothly so far.

The San Diego Zoo and Safari Park had been preparing for the arrival of the Highly Pathogenic Eurasian H5N1 strain of avian influenza since it was detected on the East Coast late last year. The strain has been causing illness and death in a higher diversity of wild bird species than during previous outbreaks and is highly contagious for domestic poultry.

The strain has not been detected in San Diego County, but was found in two Canada geese and one American white pelican this month in Colusa and Glenn counties.

The disease is spread by migratory birds, and the first step in protecting the avian collections at the Zoo and Safari Park has been to remove water fowl from exposed ponds where they might come into contact with infected wild birds. Flamingos at the Zoo were moved from the open pond near the entrance to a covered duck pond earlier this month. Peacocks and peahens that once roamed the Zoo have been moved to an enclosure not open to the public behind the veterinarian hospital.

The sprawling open spaces of Safari Park have been more of a challenge, but officials at the attraction began work on a new habitat for birds about 40 days ago in anticipation of the virus, Stehly said.

Three flamingo feeding pools and one large pelican pool have been installed at the Safari Park’s Bird Breeding Center, he said. All the pools are covered, and the park plans to install wire deterrents on top of the covering to prevent wild birds from roosting on it, Stehly said.

Unfortunately for the guests, all of the new habitats will not be visible to the public.

To compensate for the empty spaces, Stehly said the park’s horticulture department is looking into adding more plants to the habitats to make them more visually interesting. Signs are being installed to inform guests of the situation.

Nadine Lamberski, chief conservation and wildlife health officer for the San Diego Zoo Wildlife Alliance, said migrating Canada geese usually are seen at Safari Park in October and November, so the threat of the H5N1 strain occurring locally is a real concern.

Lamberski said the path of the avian flu’s spread is perplexing for a number of reasons.

“We were kind of anticipating maybe we would see cases in late summer or early fall, but to have them identify in mid-summer makes you scratch your head quite a bit,” she said about the avian flu’s arrival in California.

Because of the time of year the virus was found in California, Lamberski said the infected Canada geese probably were resident rather than migratory birds. But that raises the question of how it arrived in California, she said.

“It has everybody confused,” she said. “If you look at the way it moved across the country, it went east to west and the migratory patterns are usually north to south in the fall and south to north in the spring. So it is a bit perplexing. Why are we having this lateral movement?”

It’s also unclear how long the virus will remain in an area, although some zoos on the East Coast have reported it already has subsided, she said.

Lamberski likened the uncertainties of the spread to the confusion about COVID-19 in mid-2020. For now, she said, the San Diego Zoo Wildlife Alliance’s response will be to take an abundance of caution to protect its birds.

“We’ll certainly learn a lot and we’ll learn as we go, but right now we’re maintaining the best decisions we can with the available information and doing our best to keep our birds healthy,” she said, adding that the outbreak likely will be a topic of discussion at the upcoming Wildlife Disease Association annual conference in Madison, Wisconsin.

At Safari Park, birds are moved early in the day before temperatures rise, and Stehly said the relocations may be complete in about three weeks. About 200 to 300 birds are moved at a time to make the work less stressful on both the birds and the teams capturing them.

After the birds are relocated, Stehly said keepers watch them to ensure they are eating and not stressed by the move. The relocation may be less of an ordeal for water fowl in a pond that is drained once a year, but it could be more stressful to flamingos who were hatched in their habitat and never moved, he said.

Ducks and geese were the first birds to be moved because they were most susceptible to the catching the flu through contact with migratory birds, and eventually all birds except for those already in enclosed aviaries will be moved to new locations, Stehly said.

Nationwide, 40 million cases have been reported in domestic poultry in 37 states, according to data collected by the Centers for Disease Control and Prevention.