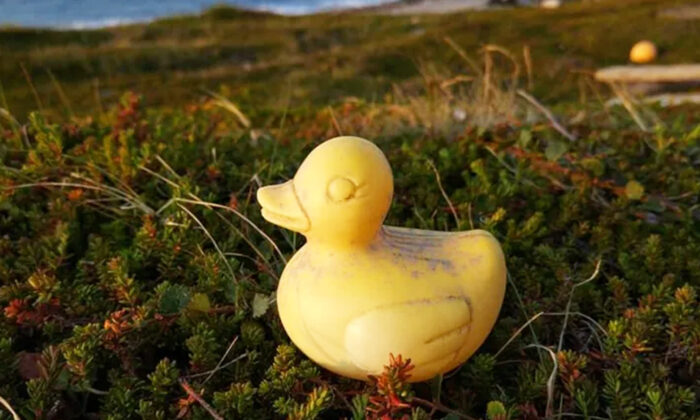 A man from Moscow, vacationing with his family on a rocky beach in northwestern Russia, stumbled upon a rubber duck bath toy that had floated far from home.

After some inquiry, Vladimir Matusevitch, a graphic designer, learned that the yellow duck had voyaged some 6,000 miles to the shores of Rybachy Peninsula—all the way from a small town in central Canada.

The dingy rubber duck was clearly marked in felt pen with the number “1417.”

The Russian dad managed to track down the person who first sent the toy on its journey as part of a charity rubber duck race.

“We were relaxing on the deserted northern shores,” Matusevitch told The Epoch Times. “There is nothing more interesting than looking at what was thrown out by the sea.

“A lot of interesting things accumulate there: two- to three-century-old remnants of shipwrecks, bright floats from nets, shells, multicolored ropes, and so on.

“My wife stumbled upon this duck.”

Suspecting the toy came from a duck race, knowing of no such races in Russia, Matusevitch took to Facebook in the hopes of discovering the duck’s place of origin.

“I wrote about 300 pages and messages on Facebook. I didn’t find Monica Iverson, but Monica wrote to me,” Matusevitch said, referring to the woman whose duck it was.

The Canadian from Ardmore (a small town 135 miles northeast of Edmonton) Iverson, who organized the Ardmore Duck Race in 2017, claimed she was the owner.

But it wasn’t until this summer that she saw Matusevitch’s message from 2019, and replied.

“I said, ‘Hey, yeah, that’s our duck,’” she told CBC, and then confirmed that the penmanship matches her handwriting. “My ones have a tail on the top and the sevens have a dash across.

That duck—one of 2,000 similar ducks—would have set sail on June 4, 2017. The duck race raises funds for local students in Ardmore.

“It’s astronomical, the sort of thing that this duck must have had to go through,” she added.

Matusevitch, who found it on Aug. 16, 2019, marveled at how far it traveled. “It was interesting,” he told the newspaper. “We thought that the duck is most likely from England, and this is already an interesting swimming route.

“Only [Iverson] herself can tell how the duck traveled all this distance.

“I still can’t believe it.”

Ocean current expert Paul Myers, from the University of Alberta, reportedly told CBC that the duck probably dumped into Hudson’s Bay, traveled counterclockwise through the bay to Hudson Strait, around Quebec, into the Labrador Sea, before entering the Gulf Stream—which then sped the duck on its northeasterly course across the Atlantic. The bath toy then washed up on the shores of the Russian peninsula.

“I’m more surprised the duck survived,” Myers said. “You know, it didn’t sink because of waves.”

The Muscovite is now planning the rubber duck’s return journey to its rightful owners—but not before taking a few fun photos for the road. And he’s tucking in a few souvenirs to make the trip back home from Russia.