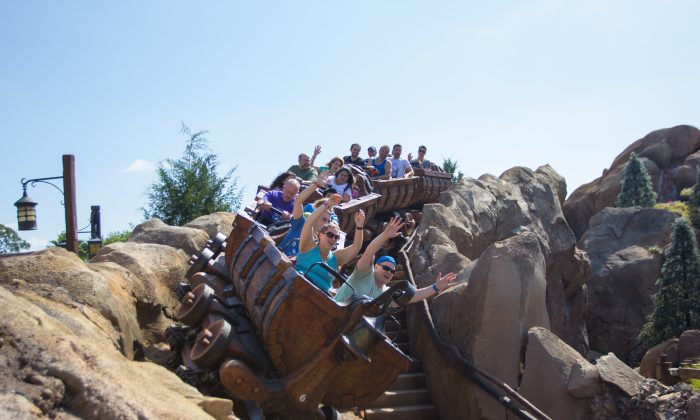 David Wartinger, a professor emeritus in the department of osteopathic surgical specialties at Michigan State University, led both a pilot study and an expanded study to assess whether the stories he was hearing from patients were true.

The pilot study appears in the Journal of the American Osteopathic Association.

“Basically, I had patients telling me that after riding a particular roller coaster at Walt Disney World, they were able to pass their kidney stone,” Wartinger said. “I even had one patient say he passed three different stones after riding multiple times.”

This resulted in Wartinger going out and testing the theory. Carrying a validated, synthetic 3-D model of a hollow kidney, complete with three kidney stones no larger than 4 millimeters, he rode the Big Thunder Mountain Railroad ride at the theme park 20 times. His initial results verified patient reports.

“In the pilot study, sitting in the last car of the roller coaster showed about a 64 percent passage rate, while sitting in the first few cars only had a 16 percent success rate,” Wartinger said.

The expanded study, conducted with Marc Mitchell, a Michigan State University resident at the time, included riding the same roller coaster with multiple kidney models attached to the researchers. They discovered even better results while sitting in the back of the coaster, with a passage rate of nearly 70 percent. They also found that both studies showed a 100 percent passage rate if the stones were located in the upper chamber of the kidney.

“In all, we used 174 kidney stones of varying shapes, sizes, and weights to see if each model worked on the same ride and on two other roller coasters,” Wartinger said. “Big Thunder Mountain was the only one that worked. We tried Space Mountain and Aerosmith’s Rock ‘n’ Roller Coaster and both failed.”

Wartinger went on to explain that these other rides are too fast and too violent with a G-force that pins the stone into the kidney and doesn’t allow it to pass.

“The ideal coaster is rough and quick with some twists and turns, but no upside-down or inverted movements,” he said.

It’s estimated that around 300,000 people per year go to an emergency room suffering from kidney stones and the cost of treatment could range anywhere between $5,000 to $10,000.

How to Prevent Kidney Stones

Lithotripsy, which breaks apart kidney stones that are too large to pass, is a common treatment for the problem. Wartinger says the procedure is usually used in cases where the kidney stone is larger than 5 millimeters.

“The problem though is lithotripsy can leave remnants in the kidney, which can result in another stone,” Wartinger said. “The best way to potentially eliminate this from happening is to try going on a roller coaster after a treatment when the remnants are still small.”

He adds that patients could even try going on a coaster once a year as maintenance, lessening the chances of future issues and minimizing health care costs.

“You need to heed the warnings before going on a roller coaster,” he said. “If you have a kidney stone, but are otherwise healthy and meet the requirements of the ride, patients should try it. It’s definitely a lower-cost alternative to health care.”