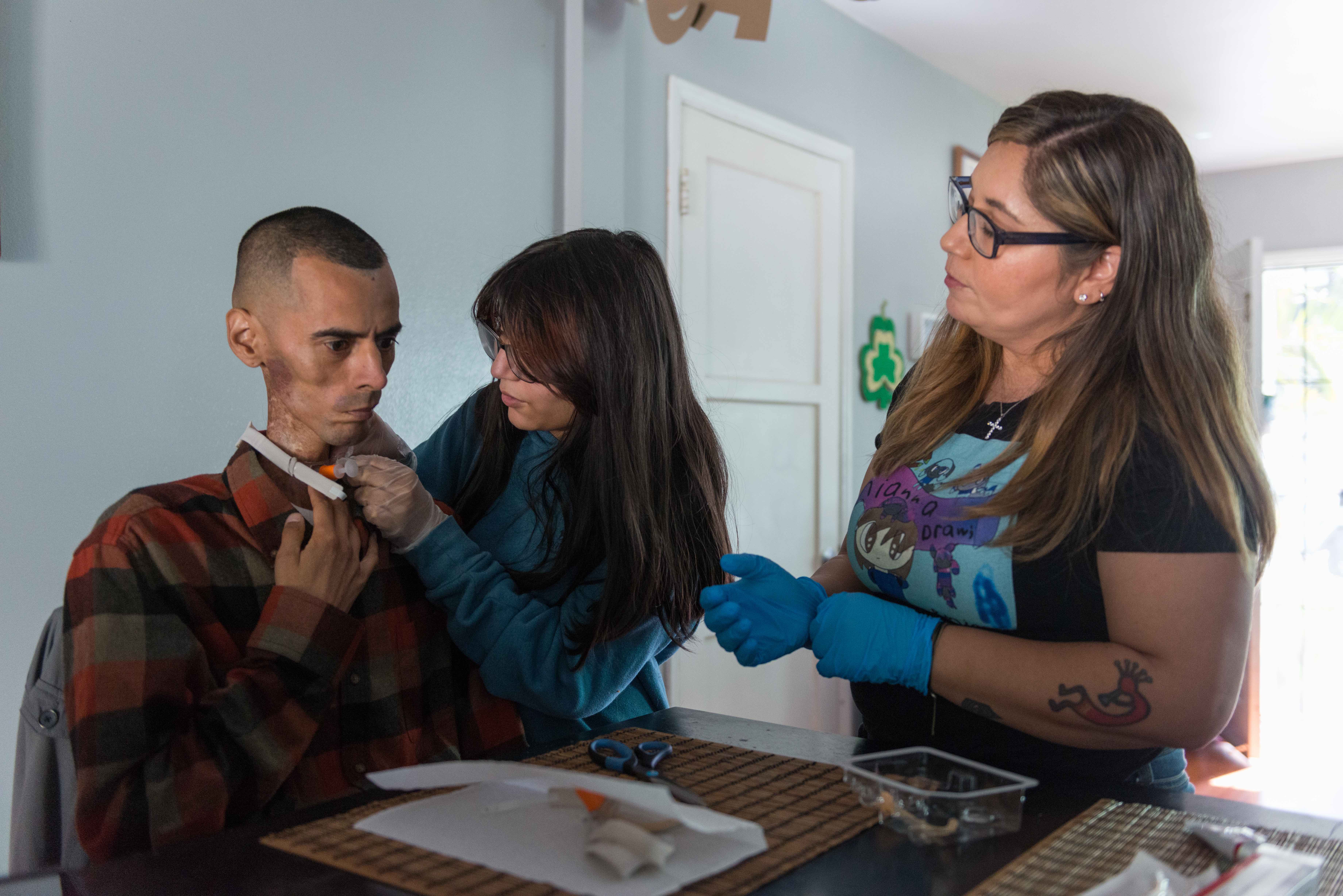 Rocio watches over Rhianna to make sure she takes the correct steps to change her father’s trach tube, which must be done once a month. “I’ve been slowly teaching her for the past year,” Rocio said. (Heidi de Marco)
Tell
Facebook
Tweet
Email

On a recent Thursday afternoon, Rhianna Alvarado struggled to don her protective gloves, which were too big for her petite hands.

With her mom coaching her every move, she edged close to her father and gently removed the plastic tube from his throat that allows him to breathe. She then cautiously inserted a new one.

“I know, I know,” replied Rhianna, her eyes constantly searching for her mom’s approval.

Rhianna is only 13. When she finished the delicate task of changing her father’s tracheostomy tube, usually performed only by adults, she went back into her room to doodle on her sketch pad and play with her cat.

Rhianna’s father, Brian Alvarado, is an Iraq War veteran and a neck and throat cancer survivor.

Like most kids, Rhianna has been stuck at home during the COVID-19 pandemic and attends school online. But unlike most other eighth-graders, Rhianna is a caregiver, tending to her dad between her virtual classes.

Rhianna is among more than 3 million children and teens who help an ill or disabled family member, according to Caregiving in the U.S. 2020, a national survey published by the National Alliance for Caregiving and AARP. The survey also found that Hispanic and African American children are twice as likely to be youth caregivers as non-Hispanic white children.

Carol Levine, a senior fellow at the United Hospital Fund, a nonprofit that focuses on improving health care in New York, said the pandemic, combined with the worsening opioid epidemic, has increased the number of youth caregivers because more children are homebound and must care for ill or addicted parents.

The pandemic has also made caregiving harder for them, since many can no longer escape to school during the day.

“In school, they have their peers, they have activities,” Levine said. “Because of the contagion, they aren’t allowed to do the things they might normally do, so of course there is additional stress.”

Levine was an author of a national survey in 2005 that found there were about 400,000 youth caregivers between ages 8 and 11. The survey hasn’t been updated, she said, but that number has likely grown.

Kaylin Jean-Louis was 10 when she started doing little things to care for her grandmother and great-grandmother, who have Alzheimer’s disease and live with Kaylin and her mother in Tallahassee, Florida.

Now 15, Kaylin has assumed a larger caregiving role. Every afternoon after her online classes end, the high school sophomore gives the women their medicine, and helps them use the bathroom, dress, and take showers.

“Sometimes, they can act out and it can be challenging,” she said. The hardest thing, she said, is that her grandmother can no longer remember Kaylin’s name.

COVID has added another level of stress to an already complex situation, Kaylin said, because she can’t decompress outside the house.

“Being around them so much, there has been a little tension,” Kaylin acknowledged. She uses art to cope. “I like to paint,” she said. “I find it very relaxing and calming.”

Kaylin’s mother, Priscilla Jean-Louis, got COVID last month and had to rely on Kaylin to care for the elder women while she recovered.

“She isn’t forced to do it, but she helps me a great deal,” Priscilla said. “If there are moments when I’m a little frustrated, she may pick up on it and be like ‘Mommy, let me handle this.’”

Rhianna’s dad, Brian, 40, never smoked and was healthy before joining the Marine Corps. He believes he got sick from inhaling smoke from burn pits during the Iraq War.

He was diagnosed with squamous cell carcinoma of the neck and throat in 2007. He also has an inflammatory disease that causes muscle weakness and a rash, PTSD, and hyperthyroidism from chemotherapy and radiation.

Rhianna’s mom is Brian’s primary caregiver, but Rhianna helps her change her dad’s trach tube and feed him through a feeding tube in his abdomen.

“I’m still learning how to do it,” Rhianna said. “I get nervous, though.”

The two look after him on and off all day. “Our care for him doesn’t end,” Rocio said.

Rhianna is quiet and reserved. She has autism, struggles with communication, and has trouble sleeping. She has been talking to a therapist once a week.

The trach has had the biggest impact on Rhianna, because Brian doesn’t join them for meals anymore.

“I feel sad that he can’t eat anything,” she said.

Despite the growing number of youth caregivers, they have little support.

“If you look at all state and national caregiving programs and respite funding, they all begin at the age of 18,” said Melinda Kavanaugh, an associate professor of social work at the University of Wisconsin-Milwaukee.

Kavanaugh is researching Alzheimer’s and caregiving in Latino and African American communities in Milwaukee.

“We had a number of kids who were much more stressed out because they had no outlet,” she said. “Now they’re suddenly [providing] 24/7 care and there was absolutely no break.”

Adult and youth caregivers often suffer from anxiety, depression, and isolation, but there is little data on how caregiving affects young people over the long-term, Kavanaugh said.

Connie Siskowski, founder of the American Association of Caregiving Youth, helped care for her grandfather as a child.

“I was not prepared,” she said. “It was traumatic.”

Her Florida-based group connects young caregivers and their families with health care, education, and community resources. The goal is to identify problems such as stress or isolation among the children, and address these issues so they won’t harm the children as adults, Siskowski said.

“It can help kids develop a sense of responsibility, empathy, and confidence,” Levine said. “The problem comes when their schoolwork, their friendships, their lives as a child are so affected by caregiving that they can’t develop in those other important ways.”

Canada
Canadians With Covid-19, Caregivers for Those Suffering From It Can Apply for Federal Support Today

Mind & Body
Support Your Body in the Fight Against COVID