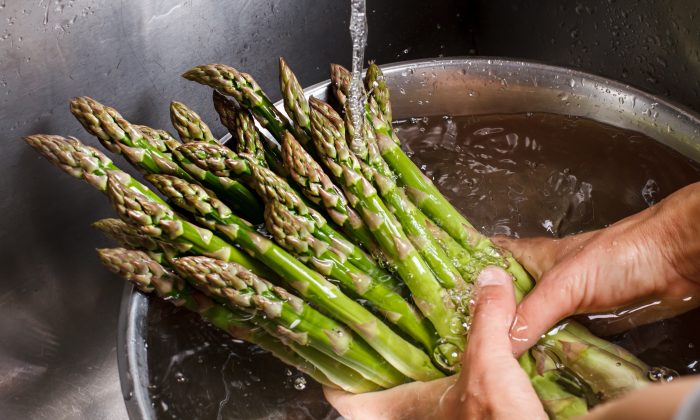 Ring In The New Year With a Healthy Dose of Asparagus

If you’re planning to ring in the New Year with a few celebratory drinks, here’s a tip for protecting yourself from paying the hangover price on New Year’s Day.

A study in the Journal of Food Science suggests you should eat some asparagus to ward off the effects of a New Year’s Day hangover.

According to researchers at the Institute of Medical Science and Jeju National University in Korea, an extract of asparagus contains amino acids and minerals that may protect your liver cells against toxins from alcohol. With a better functioning liver, you just may be able to avoid the dreaded New Year’s Day hangover.

The Korean scientists tested an extract of young asparagus leaves and shoots on human and rat liver cells. They found that the asparagus extract significantly alleviated cellular toxicity usually associated with the oxidative stress caused by chronic alcohol use.

Their results, they believe, provide evidence of asparagus’s ability to protect liver cells and alleviate the hangover effects of too much alcohol.

A member of the Lily family, asparagus has been used as a natural remedy in Europe and Asia for centuries. Promising research at Rutgers University is studying the effect of two phytochemicals abundant in asparagus that are believed to inhibit the growth of cancer cells in leukemia and colon cancer.

Asparagus may also ward off the signs of aging thanks to high levels of potassium and vitamins A, E, C and thiamin. Asparagus is a rich source of folate, a B-vitamin necessary for healthy cell division and DNA synthesis, and instrumental in preventing birth defects.

A lack of folate has been linked to peripheral arterial disease, heart attack, stroke, osteoporosis and Alzheimer’s disease. Another reason to eat asparagus when imbibing is that alcohol can deplete levels of folate.

No discussion of asparagus is complete without reference to the smell of some people’s urine after consuming it. The smell has been compared to rotten eggs, cabbage or wet earth.  It results from the same chemical that skunks release in defending themselves.

According to scientists at the Monell Chemical Senses Center most people detect the distinct sulfurous odor in their urine shortly after eating asparagus. But a study published in the journal Chemical Senses determined that some people don’t produce the odor at all, while others produce it but are not able to smell it. It depends on your genes.

Whether or not you produce the odor, it’s a small price to pay if you want to avoid that awful New Year’s Day hangover.