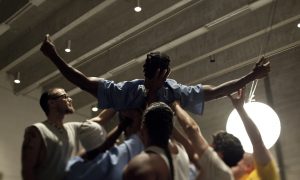 Rewind, Review, and Re-rate: ‘Welcome to the Men’s Group’: Watch ‘The Work’ Instead

Let me preface this review of “Welcome to the Men’s Group,” a comedy about modern men’s-work groups, with a quote from my review of the documentary “The Work,” which covers the same basic subject matter, except far, far more effectively. (In fact, there’s no comparison.):

Of all the film critics on Rotten Tomatoes writing about the documentary “The Work,” I’m the only one who has actually done the work (and facilitated the work) on display in this riveting documentary about healing, set in a maximum-security prison. And done it with three of the actual facilitators in the film.

In addition, it’s pretty much guaranteed that I’m also the only film critic who’s read all the literature about men’s work since the 1980s, staffed five weekends, and attended a weekly men’s group for six years.

I’ve read the other reviews. They’re fairly clueless, writing about things they’ve never experienced. Here’s the deal: Nobody likes this movie. But they don’t like it for mostly all the wrong reasons, and they don’t know what those reasons are.

Lawyer Larry (Timothy Bottoms) wakes up in his brand new West Los Angeles McMansion, makes some coffee, and accidentally locks his chihuahua in a cupboard.

After feasting and small talk, they do some scanty rituals, pass around the talking-stick, and share about work issues, dad issues, sex and women issues, children, and so on.

Some guys’ issues are more serious than others’. Larry’s depressed that his wife dumped her meds down the toilet and vamoosed, and he’s also facing financial problems. Latino, ex-military, personal trainer Eddie (Terence J. Rotolo) is about to become a dad and is pretending that’s awesome.

There’s a meek, new, red-haired recruit (Mackenzie Astin) who broadcasts plaintive, deer-in-the-headlights confusion, dismay, concern, reluctance, and so on, at the proceedings throughout, via eyebrow-acting, to the point where you want to slap him. (For the record, you don’t just randomly add some new guy to an established men’s group. He has to do his weekend first, be initiated, and learn the common language.)

The founder of the group, Michael, bangs on a makeshift drum, starts a chant: “We shall take responsibility for the history of men’s violence against women.”

There are caveman graphics depicting mythological gods and tales of Titans that outline the archetypal male issues. There are overprolonged check-in monologues; there’s way too much full-blown, ugly-dad-bod, full-frontal male nudity that you’d prefer to un-see; there’s a wafting, New Age-y atmosphere, which is bad enough even without the kitschy, jazz-lite soundtrack.

But the really exasperating thing about this film is the fact that it contains bits and pieces of authentic men’s work—stuff that I know from experience to be true (and worthwhile)—but it provides no context to make these things ring true for non-initiates. In fact, it does the opposite. My guess is that any non-initiated man seeing this film and believing it to be representative of what actually goes on in men’s groups would never, ever set foot in a men’s group.

Here are the three main reasons “Welcome to the Men’s Group” fails:

1) It fails to show how meticulously structured men’s work is. There is a time and place for everything, and it all works because the structure is proven to work, and men honor it. A huge portion of this structure is the emphasis on safety, which derives from the military. It’s the paradox that only within a disciplined structure, can you be truly free. Here, the structure is eschewed for a freewheeling, loosey-goosey approach, which is thoroughly inaccurate and makes the entire endeavor feel chaotic and dangerous.

2) This minimally diverse group, which includes an Arab (Ali Saam) and the aforementioned Latino, is pretty white, with, generally speaking, first-world problems. Which is largely true in America, Canada, the UK, Australia, New Zealand, Germany, and Scotland. In fact, this cliché is best illustrated by what I once heard an irate white man shout at a giant circle of 100-plus white men: “MKP [Mankind Project] is basically a bunch of white men pretending to be Indians.” However, what the film fails to show is that in the real men’s work world, there is a sizeable number of African-American men in top leadership positions and, especially in New York, a large gay contingent.

Men’s work clichés abound here; it’s almost as if the writer put 100 men’s groups through a sieve, gathered all the clichés together, and made a film about that. Almost.

3) It can’t decide what it wants to be: comedy or drama. It’s a hodgepodge, where the comedy is just not funny enough to work, and which doesn’t set up the heavy drama that comes later. This incohesiveness is confusing, and when you add feelings of un-safeness, rambling and boring monologues, and a lack of context that makes everything feel like it’s just TMI, you end up with this dud. And that’s a crying shame. The writer-director clearly had high hopes and expectations, but badly misrepresented all of the following:

The international men’s movement and men’s work as it exists in the world today is a magnificent attempt by the world’s men to recover their integrity, be authentic, accountable, and truthful; to face their deepest fears, have the courage to dig down, find, and heal the wounds that cripple their lives; and to find trust in other men to help them heal, to become earth stewards and better husbands and fathers. All of that, in context, can only be described as heroic by anyone who’s ever witnessed it.

Men’s work is about retrieving, rescuing, resuscitating, reviving, and resurrecting the tribal, sacred masculine, in order to attempt to help heal our messed-up world. And to fumble that ball with a flaccid, half-cocked comedy that portrays men as a passel of, basically, blithering idiots is a bit of a crime.

Do not watch “Welcome to the Men’s Group.” Watch “The Work” instead.