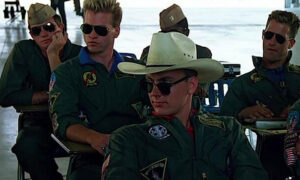 Rewind, Review, and Re-Rate: ‘The Highwaymen’: Bonnie and Clyde, the Realistic Version

“Bonnie and Clyde” (1967) could have been made in today’s post-truth era, considering it glorified two notorious outlaws by having the exceptionally beauteous Faye Dunaway and Warren Beatty portray them.

Also, communism (which is what post-truth is a harbinger of) is represented in the 1967 movie. How? It supported the notion of Bonnie and Clyde being laudable robbin’ hoods, who robbed the Depression-era bankers, who were driving America into the ditch of economic ruin. Both the insidious institutional redistribution of wealth and the violent gangster robbery version are inherently communist. And communism is part of the current zeitgeist again—only it’s got a few new monikers.

Ironically, in these confused times, here comes a more traditionalist take: In Netflix’s 2019 “The Highwaymen,” a subdued, slow-burn, somber police procedural, Bonnie Parker and Clyde Barrow are presented as coldblooded murderers. “The Highwaymen” also reestablishes how it was with the more upright social mores of that era, and feels vastly more realistic than its famous 1967 cinematic predecessor.

Naturally, because this is a film called “The Highwaymen” and not “Bonnie and Clyde,” when it comes to Bonnie (Emily Brobst) and Clyde (Edward Bossert), these two maddeningly elusive, ruthless outlaws are intentionally sidelined.

Director John Lee Hancock creates a powerful air of mystery and danger by never showing the killers’ visages until the last minute. This ramps up a visceral, human response to the fact that here are basically two demonically possessed, sweet-faced kids with lethal weaponry stashed under the dashboard. The following relentless rain of lead that reduces them to macabre dancing puppets in the metal kill-box of their handsome new Ford V8 is all the more powerful.

While the pacing is slow, tension is nevertheless high throughout, which is a difficult thing to pull off. The most powerful scene comes when Hamer tracks down Clyde’s father, Henry (William Sadler), a mechanic, who insists his boy wasn’t born under a bad sign. “All he did was steal a chicken.”

Hamer observes that there had to have been something dark inside the boy that caused him to steal that chicken in the first place. Then follows Hamer’s own confession in Costner’s riveting monologue: His character had originally wanted to join the seminary, but after surviving three shotgun buckshot blasts, when his chance at retribution came, he shot his perpetrator dead on his porch, and there went his priesthood plans down the drain. Finally seeing eye-to-eye about destiny, Clyde’s heartbroken dad implores Hamer to end it quickly.

Actually, there’s another powerful scene: the shot-up Ford, towed through the town, is swarmed by insane fans hysterically elbowing past cops to snatch souvenirs—watches, earrings—off their heroes’ bloody bodies like scavenging hyenas. Bonnie and Clyde’s funerals are like mini-Woodstocks.

The Acting and the Ethics

Both Costner and Harrelson are steeped in classic American lawman ethos. Costner played Elliot Ness, who nabbed Al Capone in 1987’s “The Untouchables;” Harrelson played bounty hunter Carson Wells in 2007’s “No Country for Old Men,” not to mention his “True Detective” series with Matthew McConaughey.

Harrelson’s Gault often ponders whether their present mission falls within the purview of old men (but not without his trademark eye-twinkle), while Costner is an old-fashioned, steely, Wyatt Earp-type lawman-unto-death.

There are many well-written exchanges between Hamer and Gault over evolving lawman ethics, the curse of taking a life, and throughout, damning commentary on the media turning killers into cult heroes. There’s a lot of “shame on you’s” to reporters offering cash for interviews. Have a look at “The Highwaymen” and then 2014’s “Nightcrawler” to compare and contrast the giant gap between old and new journalism ethics. Old is better.

Hamer and Gault are cut-and-dried, but what’s tragic about Bonnie and Clyde was revealed by my looking up a poem written by Bonnie and then reflecting on how the paths of good and evil can turn on a dime. Here’s an excerpt. I recommend reading the whole thing.

The Story of Bonnie and Clyde

… They call them cold-blooded killers;
They say they are heartless and mean;
But I say this with pride,
That I once knew Clyde
When he was honest and upright and clean.

But the laws fooled around,
Kept taking him down
And locking him up in a cell,
Till he said to me,
“I’ll never be free,
So I’ll meet a few of them in hell.”