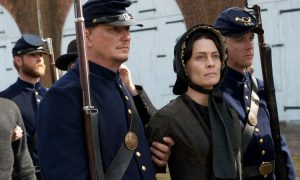 Hollywood gets significant cinematic mileage, both documentaries and regular movies, out of storylines involving big corporations covering up devious dealings with cancer-causing chemicals. Similar to 1993’s “The Fugitive” and 2000’s “Erin Brockovich” before it, 2007’s legal suspense thriller “Michael Clayton” is an outstanding example of the genre.

Michael Clayton (George Clooney) is a highly skilled “fixer” (or “janitor” by his description) for law firm Kenner, Bach, and Ledeen. He’s also a bagman (delivering illegal cash payments), former litigator, legal adviser, and dad. As his detective brother Gene (Sean Cullen) says, the cops think Michael’s a lawyer, the lawyers think Michael’s a cop, but Gene thinks Michael’s a card-gambling pain in the neck who asks for favors that sometimes jeopardize his own law enforcement career. But Michael’s the man when it comes to exploiting connections, legal loopholes, and cleaning up the law firm’s extracurricular messes.

We meet Michael one dreary, early winter morning, driving country back roads. He’s worn out and world-weary. He sees three horses on a hill, stops his car, goes up to wonder at their stark simplicity and beauty—and then his car explodes. That’s the cinematic prelude.

Michael leads a jam-packed, nonstop life of problem-solving for the high-profile law firm he works for. He eventually gets entangled in a multimillion-dollar class-action lawsuit covering up damaging evidence against U-North, an agricultural conglomerate. U-North is one of his firm’s clients, which in turn has in its employ the type of soulless legal counsel who hires assassins on the sly.

In his subsequent state of clarity, Arthur has suddenly enlightened to the fact that by defending one of U-North’s clear, tasteless, lethal liquid products, he has become, in his own words, “Shiva, the God of Death,” and he wants out. It’s a great role for Wilkinson, who gets to deliver over-the-top, dramatic, off-his-meds antics, like stripping naked in a filmed deposition, to the massive mortification of his colleagues.

Why? She’s found out via hired henchmen that Arthur got his hands on a confidential document that could utterly destroy U-North. She tells her U-North CEO (Ken Howard) this fact, and then, unbeknownst to said boss, she hires the henchmen to start unpacking the more deadly solutions in their arsenal.

Michael eventually starts investigating Arthur’s sudden death, and the facts eventually come to light, resulting in a breathtaking cobra-versus-mongoose verbal entrapment finale between Clayton and Crowder, giving the audience the climatic payoff they’ve been waiting for.

Only the flip-phones look outdated. “Michael Clayton” takes the narrative ploy of starting out close to the end, backtracking to the beginning, telling the story forward to that opening scene, and then cruising to the end from there.

It’s a very effective storytelling method. By presenting a puzzle piece at the outset, it immediately engages the audience’s subconscious in keeping an eye out throughout the entire film for where that scene fits in.

Director Tony Gilroy (who previously wrote the “Jason Bourne” trilogy) gives the audience something that never gets old: George Clooney at the top of his game, delivering an ambiguously scrupled, brooding hero who always manages to stay a step ahead. “Michael Clayton” is a high entertainment value drama-thriller filled with exceptional acting and clever dialogue, and bookended by a volatile ending that matches its explosive beginning.

“Michael Clayton” landed a total of seven Oscar nominations. Tilda Swinton took home a win, but both Clooney and Tom Wilkinson were both well-deserving of their nominations.