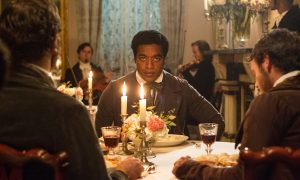 Popcorn and Inspiration: ‘Erin Brockovich’: A Reminder of Massive Coverups

America now appears to be in a state of complacent, pessimistic fatalism regarding the lies generated by corporate greed that physically poison our environment. We should all be whistleblowers in this day and age.

Hidden (and Not So Hidden) Talents

In the early 1990s, Erin Brockovich goes job hunting. With two ex-husbands and three mouths to feed, she’s got no skills or education. She is, however, next-level resourceful, smart as a whip, with what appears to be a photographic memory, uncanny people skills, and certain, er, assets, shall we say, that—by wearing anything with a plunging neckline—allow her to apply feminine wiles to a degree best described as “weaponized.”

Erin also embodies the phrase, “Rude, crude, and socially unacceptable.” She’s got a hair-trigger temper, a sizable chip on her shoulder, and is jam-packed with what Mad Magazine used to call “Snappy Answers to Stupid Questions.” She suffers neither fools nor haughty attitudes gladly, so if you’re a lawyer talking down to her, you’ll elicit the following response: “That’s all you’ve got lady—two wrong feet in (expletive omitted) ugly shoes.”

But she’s charming! Because she’s played by Julia Roberts at the pinnacle of her megawatt stardom trajectory (“Erin Brockovich” landed her an Oscar) and thus she badmouths/sweet-talks her way into lawyer Ed Masry’s (Albert Finney) Southern California law firm as an assistant, ignoring all his requests to dress more appropriately for the office. Eventually, he’s even putting a second mortgage on his house to be able to afford the massive lawsuit she talks him into taking on.

She may be a lowly assistant, but she’s got a world-class talent for sleuthing and picks up on details others might miss. She notices when things don’t add up, and having the type of curiosity that tends to unravel sweaters and untie knots, she randomly uncovers a paper trail leading to the sleepy, dusty town of Hinkley, California. There, many people have many forms of rashes and cancers, not to mention deformed barnyard animals.

Why? It’s the chromium-6-contaminated runoff that’s seeped into the groundwater for years because the nearby Pacific Gas and Electric power plant was too cheap to use chemical basin liners in its holding ponds.

As I said about “Spotlight,” director Tom McCarthy demonstrated “that the story is all about how you tell it. Because legal document scanning, periodical perusing, legalese-spewing, along with reporter meetings, reporters sitting in stuffy offices waiting for interviews, and so on, are all otherwise guaranteed yawn-fests.”

“Erin Brockovich” naturally contains many of the same ingredients, but director Steven Soderbergh, like McCarthy before him, finds ways to keep the tension turned up throughout, in order to make such dull ingredients very tasty.

Brockovich’s people skills and common touch are generated from a deep well of empathy, and the situation also triggers her mothering protectiveness. Even male lions know not to mess with a female guarding cubs, and so boss Ed Masry comes up short trying to stem the tide of Erin’s crusade for the people of Hinkley, and crusades along with her, eventually suing PG&E to the tune of $333 million in compensatory and punitive damages to local people injured by the company’s chemical negligence.

Masry refers to Erin as a “secret weapon.” What else would you call a diamond in the rough made up of pit-bull determination, a beautiful but trashy appearance, and a potty mouth that hides a world-class brain?

And just like Erin is Masry’s secret weapon, it’s this quality that is also director Soderbergh’s secret weapon; we delight in the fact that Erin has no Harvard law degree but out-lawyers the lawyers like “The Rock” roundly trouncing competitors while calling them “Jabronis” and telling them to drink tall glasses of “shut-up juice.” “Erin Brockovich” makes you feel like one person really can make a difference. (It is, after all, based on a true story.)

Ultimately, though, the true secret weapon of “Erin Brockovich” the movie is Julia Roberts. She presents us with this tasty enchilada of a character: Wrapped in the tortilla of someone too clueless to comprehend her trashy, job-interview-destroying wardrobe, not to mention her salty sailor talk on the witness stand, is the delicious filling of a woman who sees medical records in a real estate transaction, hunts down a chemistry professor to learn about why three ions of chromium are benign and six are toxic, and can memorize over 600 client phone numbers like it’s nothing. She has the same effect, when entering a verbal confrontation, as Bruce Lee ripping off his tank top, crab-walking around his opponent, and doing his scary caterwauling battle cry.

Aaron Eckhart plays George, the Fu-Manchu-sporting biker who lives next door and eschews his bike to become Erin’s babysitter, beck-and-call handyman, glorified personal assistant, and, oh yeah, lover. It’s the movie’s weak point. No self-respecting biker would deal with that amount of stress and nagging with his bike sitting right there. Then again, maybe he’d make an exception for a Miss Wichita. And maybe he did, since this is based on a true story.

That said, Eckhart and Roberts have good chemistry, and he’s believable as a guy who loves kids. And probably the best part of the whole film is when Erin schleps the unsuspecting George with her to deliver the good news to a particularly forlorn client (Marg Helgenberger). The grin on George’s face when he sees the look of disbelief—that her family will receive a vast sum of money—is worth everything.

Nobody likes corruption, except for those on the take, and this film reminds us of the chutzpah required to bring it to light.