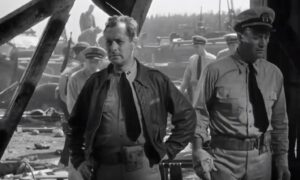 Rewind, Review, and Re-Rate: ‘They Were Expendable’: A Stirring Tribute to a Lesser-Known Theater of World War II
0
Share Now
TelegramFacebookTweetEmailTellMeWeReddit
Copy Link 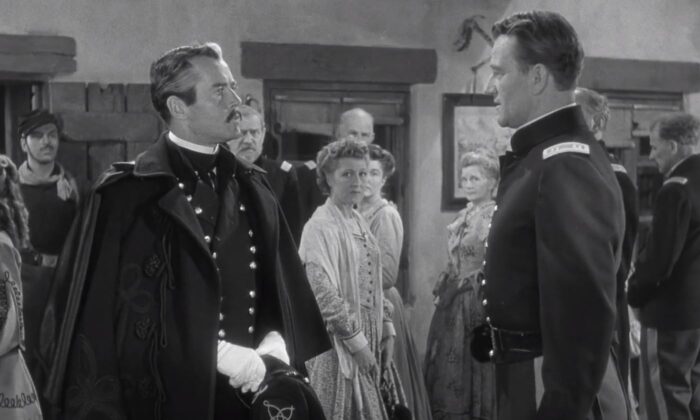 I began my viewing of director John Ford’s Cavalry Trilogy out of order—having watched 1949’s “She Wore a Yellow Ribbon,” the series’ second film, first. So, I thought it only natural to go back to 1948’s “Fort Apache,” the movie considered by many critics to be the best of the trio. And after watching it, I can see why (although I haven’t yet watched the third film in the series, 1950’s “Rio Grande.”)

When Thursday arrives at the outpost, he, with all of the grace of a sledgehammer, reprimands the senior staff because of their relaxed standards of military dress and comportment. Between Thursday’s glowering countenance and rigid interpretation of Army rules and regulations, it’s clear that he’s not there to win over any new friends.

In fact, the only apparent bright spot in the cantankerous cavalryman’s life seems to be his daughter, Philadelphia (Shirley Temple). Although none of the men care for Thursday’s leadership style, they do respect him because of his outstanding military record: He achieved the rank of general during the war.

During this era, the Irish were looked at disparagingly, and Thursday looks down his nose at the regiment’s senior enlisted man, Sgt. Maj. Michael O’Rourke (Ward Bond). In every scene the two men share, there’s a palpable ill will between them.

Things reach a boiling point when the dashing young lieutenant takes Philadelphia for a ride out in the stunning landscape—the gorgeous Monument Valley—surrounding the outpost. The two would-be lovebirds encounter a couple of dead cavalrymen whose stagecoach was ambushed by local Apaches. When Thursday learns that his daughter’s life has been imperiled, he practically goes ballistic.

Thursday barely contains his disdain for the young officer, and he forbids the youth from seeing his daughter again. For punishment, Thursday sends young O’Rourke out to retrieve the dead cavalrymen with little in the way of backup, much to the senior O’Rourke’s displeasure.

Thursday is also dismissive of the Apaches’ tribal customs and traditions, which may lead (no spoiler) to a tactical misstep in the future.

Will the snobby officer thaw out enough to allow 2nd Lt. O’Rourke to date his doted-over daughter? And will his fractious relationship with the rest of the regiment put them all in jeopardy?

Typical of John Ford’s other celebrated Westerns, a transcendent sense of adventure out on the fringes of the western frontier permeates the film. There’s also a good amount of action that plays out as Ford builds tension from one scene to the next, intermingled with some guffaw-inducing hijinks. For example, when hard-drinking Sgt. Festus Mulcahy (Victor McLaglen, in top form) attempts to break in some new cavalry recruits, he causes chaos. And later, when he and some other men including pal Sgt. Beaufort (Pedro Armendáriz) get drunk, they wind up behind bars in the outpost’s stockade.

John Wayne does John Wayne and is so convincing as a cavalryman that he looks like he was born wearing the uniform. Likewise, Shirley Temple and John Agar have believable chemistry as young romantic interests. (Agar was married at the time to Temple.) The rest of the cast is equally solid, with many of Ford’s stable of actors (Wayne, Bond, Armendáriz, and so on.). It’s fun to watch these supertalented actors ham it up throughout.

“Fort Apache” is a fantastic beginning to Ford’s Cavalry Trilogy and full of action and adventure. I only wish I’d seen it sooner. Now I’m looking forward to finally watching “Rio Grande.”