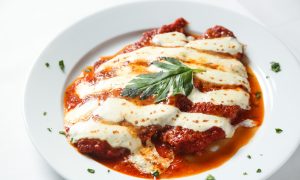 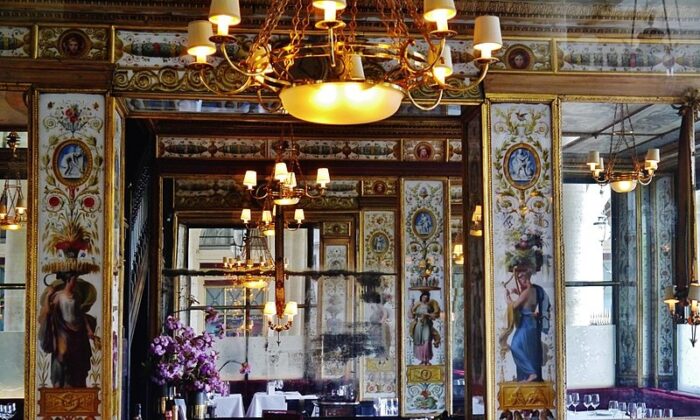 The Grand Véfour has been serving fine dining to Parisians for more than 200 years. (Zairon/Wikimedia Commons via CC BY-SA 4.0)
Food & Dining

Revolutionary Broth: The Birth of the Restaurant and the Invention of French Gastronomy

From the rise of click and collect to the advent of dark kitchens, the very concept of the restaurant is undergoing major changes. Even before the pandemic hit, consumers were moving away from the physical location of the restaurant, a transformation that has only been accelerated by coronavirus.

These new ways of eating question the very identity of the restaurant itself, and invite us to investigate its origins.

The history of the restaurant is entwined with the history of France, its birthplace. The word “restaurant” as we understand it today was accepted by the Academie Française—the body that governs the official use of the French language—in 1835. Until then, the “restauran,” also called “bouillon restaurateur” (restorative broth), was a dish composed of meat, onions, herbs, and vegetables. A broth with medicinal and digestive properties, its aim was to restore people’s strength.

The term restaurant, therefore, initially had a medical connotation, and the places that offered this healing broth for sale in the 1760s were also called “health houses.”

The first restaurant as we know it today opened in Paris in 1765 on the Rue des Poulies, today the Rue du Louvre. On the front of the shop is engraved the Latin phrase from the Bible: “Venite ad me omnes qui stomacho laboratis, et ego vos restaurabo.” This translates to: “Come to me, those whose stomachs ache, and I will restore you.”

The owner’s name was Mathurin Roze de Chantoiseau. Other writings mentioned a certain Mr. Boulanger. The establishment sold “restauran” dishes such as poultry, eggs, buttered pasta, and semolina cakes, whose light color was said to have health benefits. It first enjoyed culinary success, thanks to its signature dish of poultry with chicken sauce, which was renowned throughout Paris.

The philosopher Denis Diderot mentions the restaurant as early as 1767 in a letter to his correspondent and lover, Sophie Volland: “If I have acquired a taste for the restorer? Really yes; an infinite taste. The service is good, a little expensive, but at the time you want … It is wonderful, and it seems to me that everyone praises it.”

“Nearby, in the Rue des Poulies, the first Restaurant opened in 1765, which was later transferred to the Hôtel d’Aligre. It was a broth establishment, where it was not allowed to serve stew, as in the catering trade, but where poultry with coarse salt and fresh eggs were served without tablecloths, on small marble tables.”

Roze de Chantoiseau is said to be the first to propose the innovative concept of serving food without a fixed schedule, at an individual table and offering a choice of dishes, the price of which was indicated in advance, on the outside of the building.

At that time, in pre-Revolutionary France, the only place to eat outside the home was in a tavern or inn. But these places only offered tables d’hôtes (guest tables) with a single dish, at a price that was not fixed in advance, where people only came at a fixed time. The quality wasn’t always good—people who went to these places did so to eat and not to enjoy the taste of a dish. Roasters and caterers who were also present at the time could only sell whole pieces and not individual portions.

This new way of eating was a great success, and this style of restaurant spread and evolved. The notion of the pleasure of eating became predominant, and gastronomy developed and, to a certain extent, became more democratic. Before then, the only people who ate very well in France were the members of the court at Versailles and other nobles who had their own personal cooks.

The Birth of the Menu

On the eve of the French Revolution, many of the hundred or so restaurants in the capital were very well known. Customers came to these places to sample dishes that pleased their taste buds, not simply to sate their hunger.

The restaurant of the time was a luxurious place that could be found mainly in the Palais Royal district of Paris. Here lived an affluent, elite clientele capable of affording meals that, although no longer reserved for aristocrats, were no less expensive for it.

The great novelty of the time was the introduction of the menu. Restaurants often offered a huge selection of dishes, so as historian Rebecca Spang notes, diners were usually invited to choose from a smaller selection of these, displayed on a menu (derived from the latin “minutus”).

Antoine de Beauvilliers, a former officer of the kitchen of the Count of Provence, brother of the king, was the first private cook to leave his master and set up his own restaurant business in Paris. In 1782, he opened Le Beauvilliers in the Palais-Royal district on Rue de Richelieu.

This very luxurious place quickly became a huge success because it offered its customers—mainly aristocrats—the chance to eat as if they were in Versailles. The setting was magnificent, the service impeccable, the wine cellar superb, and the dishes exquisite and carefully presented on magnificent crockery. For many years, its cuisine was unrivaled in Parisian high society. Le Beauvilliers is thus considered the first French gastronomic restaurant.

In the years before and after the French Revolution, many cooks who had previously worked for members of the nobility followed de Beauvilliers’ example and opened their own restaurants. Quality cuisine based on recipes, rituals, and new ways of eating moved from the private kitchens of the aristocracy to the public kitchens of high society.

French gastronomic restaurants emerged, and famous and luxurious brands such as Véry, Les Trois-Frères Provençaux (which imported brandade de morue and bouillabaisse to Paris from the south), or the restaurant Le Grand Véfour, which is still in service, were created.

The medical aspect of the first “bouillons restaurans” was now long gone and replaced by gastronomy, a cultural reference recognized worldwide to this day.

This article was first published on TheConversation.com.