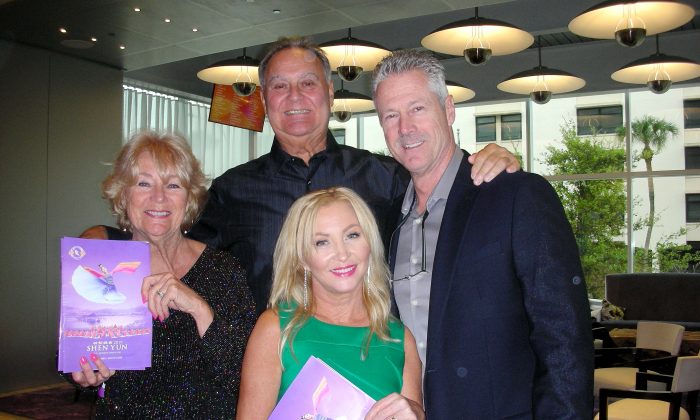 Nance Whitaker and her family attended Shen Yun at the Dr. Phillips Center for the Performing Arts on March 17, 2019. (Nancy Xia/The Epoch Times)

“[The divine nature] just emanated through every dance, every hand movement, even the colors of the costumes, from the backdrop, it just emanated; and I felt like everyone that was in this performance understood that and emanated that perfectly,” she said.

Shen Yun is a New York-based classical Chinese dance and music company that aims to bring ancient Chinese culture to life for today’s audiences. Whitaker experienced it for the first time on March 17 at the Dr. Phillips Center for the Performing Arts.

“Every year I would come. So beautiful,” she said.

Whitaker admired the beauty of the dancers’ costumes, which are brilliantly colored and are inspired by ancient Chinese clothing styles.

She appreciated the humor in the performance as well as the serious parts, such as modern-day tales of courage in the face of oppression. The dance piece “Goodness in the Face of Evil” depicts how practitioners of the peaceful spiritual discipline Falun Gong are facing violent persecution in modern China.

The communist regime in today’s China aims to wipe out ancient beliefs and traditions. Shen Yun cannot perform in China today due to the risk of being persecuted.

“The fact that you cannot show this in China today, that’s so heartbreaking; and to see the oppression even today, those are the stories that hit me,” Whitaker said.

She enjoyed Shen Yun with her husband, Ed Whitaker, and his parents, Donna Whitaker and Tim Moisan.

Donna Whitaker praised the performance over and over.

“It was unbelievable,” she said. “I would come again and again; it was marvelous. One of the best I’ve ever seen. … The [backdrop], the story, everything was just fabulous.”

With reporting by Nancy Xia and Sally Appert.