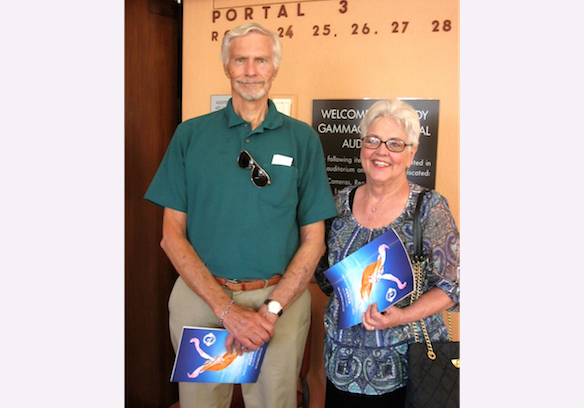 TEMPE, Ariz.—Mr. and Mrs. Voit were enchanted by Shen Yun Performing Arts New York Company at the final performance at the ASU Gammage Theater on the afternoon of March 9.

Mr. Voit and his wife Levonne live in Iowa, but spend 3-and-a-half months during the winter in sunny Arizona.

Mrs. Voit works with and donates resources to several non-profit organizations, such as Rebuilding Together and the United Way in Iowa. She is currently the volunteer program director at the United Way of Central Iowa.

“They’ve got the whole heart and soul into it, I’ll guarantee that, and you can see it,” he said. “Anybody that would commit themselves to that much training and choreography and just putting the whole program together, are just fantastic people. They really are. I hope it does very well for many years to come.”

Shen Yun is on a mission to resurrect China’s 5,000-year-old culture, which is actually not allowed in China itself today. The Shen Yun website explains: “Entirely non-profit, and independent of the Chinese regime, Shen Yun enjoys the artistic freedom of New York, enabling it to now bring these ancient traditions to the stage. Shen Yun and its mission have drawn top talent from around the world; many artists are winners of international competitions in dance, choreography, and music.”

“The way it’s choreographed is just phenomenal,” he said, “and the music, the way they insert the music into it—it’s a tremendous show.”

Mrs. Voit enjoyed the digital backdrops that are part of the performance. “The way they’ve incorporated the technology and photography, it’s just exciting, it really is.”

The website explains: “The backdrops are magical windows to completely different realms. From vast open grasslands in one dance to the stately elegance of Tang Dynasty pavilions in another; from dusty yellow battlegrounds to tropical beaches to Himalayan peaks to picturesque scenery of the Yellow River Delta—the digital projection infinitely expands and transforms the stage.”

The stories told through the dances intrigued Mrs. Voit. “That’s great fun. And I have no knowledge of them,” she said.

Shen Yun has two bilingual hosts, who guide the audience into each new segment, which enriches their understanding of the experience.

Mr. Voit appreciated the hosts. “I’m really glad that the two came out and gave us a short story on what the next part is, because you’d be lost without that, I guarantee it. It’s really fantastic,” he said.

Supporting each dance, the Shen Yun Orchestra blends instruments from the East and West to produce a unique and elegant musical experience.

“I like how they are blending the two, the East and the West, the music, and it’s just a very, very heart-felt type of program, all the way through,” said Mr. Voit.

The couple said they would encourage their friends and family to experience Shen Yun.

“Oh, definitely come,” Mr. Voit said he’d tell his friends. “It will give you an insight into the previous [ancient] China, and what it hopes to be again.”

Mrs. Voit chimed in, “I would tell them, by all means, to see it. It’s like something we’ve never seen before. I think it’s a unique experience, and I’m glad to be part of it.”