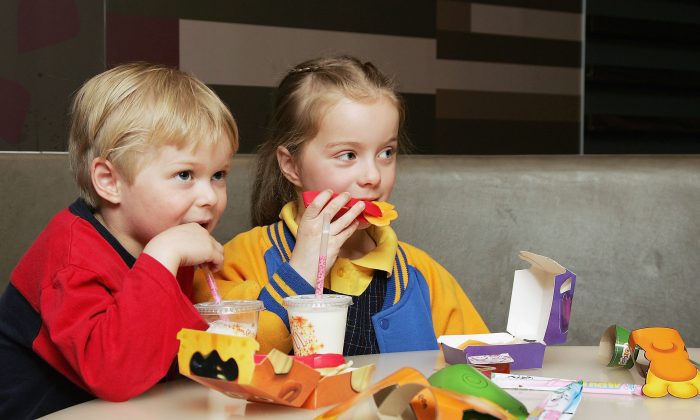 Children eat a Happy Meal at a McDonald's restaurant in this file photo. In recent years, restaurants have vowed to change up the menu and offer healthier choices for kids. (Kristian Dowling/Getty Images)
Good to Know

Chain restaurants are not known for serving up healthy kids’ meals. Most entrées on a kids’ menu are either fried, breaded, or doused in cheese. Fresh fruits and vegetables are rarely side dish options, and french fries abound.

Looking at nutritional content alone, some drinks could easily be mistaken for candy. For example, one serving of Sharks in the Water–a blue raspberry soft drink sold at restaurant chain Friendly’s—has more than an entire day’s worth of added sugar.

With options like these, it isn’t surprising that research shows kids who eat more chain restaurant food have diets of poorer quality than do other children.

In recent years, chains have vowed to change up their menus to offer healthier choices for kids. But our analysis of the nutritional content of over 4,000 children’s menu items from across the country shows that, despite these promises, kids’ plates still look much the same.

Despite the health risks, kids eat at restaurants all the time. This is due, in part, to the huge amount that chain restaurants spend on marketing to kids. Chains advertise directly to kids by offering action figures from movies, hosting birthday parties in indoor play areas, and paying celebrities and sports heroes to promote their food on billboards, through TV ads, and in social media campaigns.

Each year, the restaurant industry spends nearly one-quarter of its advertising budget on tactics that directly target children. This spending seems to have paid off: One-third of children and adolescents eat fast food every day, according to the Centers for Disease Control and Prevention.

How to Get Your Kids to Eat Nutrient-Dense Food

She asked that healthy options be heavily promoted and easier for parents to find amid the chicken fingers and pizza that have dominated children’s menus for decades. A self-professed “fry lover,” the first lady even pushed restaurants to offer healthier defaults. For example, restaurants could automatically include fruit and vegetable side dishes with kids’ meals and serve french fries only when specifically requested.

The NRA responded to this call to action by creating Kids LiveWell, a program that sets nutrition standards for kids’ meals, which restaurants can voluntarily adopt. To participate, restaurants must offer at least one kids’ meal and one other item that meet the program’s nutritional goals. For example, a piece of grilled chicken served with broccoli would likely meet these requirements, while fried chicken with french fries would not.

Kids LiveWell is incredibly popular. More than 42,000 restaurant locations have joined since the program launched in 2011. Program participants have received significant media attention, with the NRA issuing dozens of press releases since the program began.

This isn’t the only industry pledge to make kids’ meals healthier. In 2014, Subway joined the Partnership for a Healthier America, promising to offer apple slices and healthier beverages on kids’ menus. In March 2012, McDonald’s reduced the size of french fries included in Happy Meals, as well as adding fruit and low-fat dairy options. They also promised in 2013 to drop soda from kids’ menus. Restaurants like Wendy’s, Panera Bread, and Applebee’s have since followed suit.

These promises beg the question: Has anything changed? To answer this, we looked at changes in the average nutritional content of kids’ menu items from the nation’s 45 top-earning chain restaurants.

Details about these items were pulled from the nutrition information database MenuStat, which collects nutrient data from menus posted on chain restaurant websites. Their data have been updated each year since 2012.

Despite industry promises to offer healthier kids’ menu options, between 2012 and 2015, our analysis found that the amount of calories, salt, and saturated fat in kids’ menu items has not budged.

The 15 top-earning Kids LiveWell participants showed similarly dismal results. Compared to 30 restaurants not affiliated with the initiative, the top participating restaurants made no improvements to the amount of calories, salt, or saturated fat in kids’ entrées, side dishes, or desserts in the first three years of the program.

We found that in 2015, the average beverage, entrée, side dish, and dessert combined contained nearly twice the recommended calories for a single meal and more than half the daily salt limit.

At first glance, it might seem like beverage options have improved. The proportion of sugary sodas on kids’ menus has declined over time, from 30 percent of kids’ beverages in 2012 to 23 percent in 2015. But when sodas were removed from kids’ menus, they were simply replaced with other high-sugar drinks like flavored milk, sports drinks, and sweetened teas.

Because restaurants are swapping one high-sugar drink for another, the proportion of sugary drinks on kids’ menus has not changed at all over time. Since 2012, sugary drinks have consistently made up 80 percent of beverage offerings on kids’ restaurant menus.

Food companies have a history of creating voluntary programs to avoid nutrition-related regulation. However, these often have little meaningful impact on health.

For example, the Children’s Food and Beverage Advertising Initiative is an industry self-regulatory program designed to reduce food marketing for unhealthy products to kids. Although companies have followed their pledges, the nutrition criteria bar is so low—Gushers and Fruit Roll-Ups are just two examples of “healthy” products—that these actions have not had a meaningful impact.

Voluntary initiatives were a reasonable first step, but they have not had a meaningful impact on kids’ meal offerings.

The Kids LiveWell program, though well-intentioned, seems destined for the same fate. A kids’ menu from Applebee’s—one of the restaurant chains that joined Kids LiveWell—includes one grilled chicken entrée alongside chicken tenders, a corn dog, mini cheeseburgers, and macaroni and cheese. It’s hard to imagine the grilled chicken standing a chance.

Voluntary initiatives were a reasonable first step, but they have not had a meaningful impact on kids’ meal offerings. So what else needs to be done to ensure our children get the nutrients they need?

Kids LiveWell could improve by adding standards for healthy beverages so that the vast majority of beverages offered on kids’ menus are healthy options like unsweetened water or seltzer.

The program should also require that a much larger percentage of kids’ menu items meet the program’s nutritional criteria. For example, if more than half of the entrées on kids’ menus looked like the grilled chicken, kids might be more likely to choose the healthy option.

Although big chain restaurants have a long way to go, some smaller restaurants have made promising changes. When the Silver Diner chain increased the number of kids’ meals meeting the Kids LiveWell standards, began offering fruit and vegetable sides by default, and removed french fries and soda from their menus, kids’ orders of healthy meals and sides went up, and unhealthy options declined.

4 Foods to Avoid in Your Easter Basket

We believe these types of changes should be voluntarily adopted by restaurants or mandated by state and local governments. For example, the cities of Davis, Stockton, and Perris, in California, have issued “healthy-by-default” ordinances, which require restaurants to offer healthy beverages automatically with kids’ meals, although parents can still request sugary drinks if they want to.

Other policies—such as taxes on sugary drinks and other foods high in calories, sugar, and salt—could encourage restaurants to revamp their kids’ menus, or may at least curb consumption of less healthful options.

Advocates and parents can help hold the restaurant industry accountable to their voluntary pledges to ensure meaningful progress toward healthier kids’ meals.

Going out to eat was once viewed as an occasional treat, but it is now so commonplace that it accounts for nearly half of all food spending. Kids deserve tasty, nutritious meals to help them grow, play, and learn, and restaurants can play an important role in making that happen.

Alyssa Moran is a doctoral candidate in the Department of Nutrition at the Harvard School of Public Health. Christina Roberto is an assistant professor of social and behavioral sciences and nutrition at the University of Pennsylvania. This article was originally published on The Conversation. Read the original article.