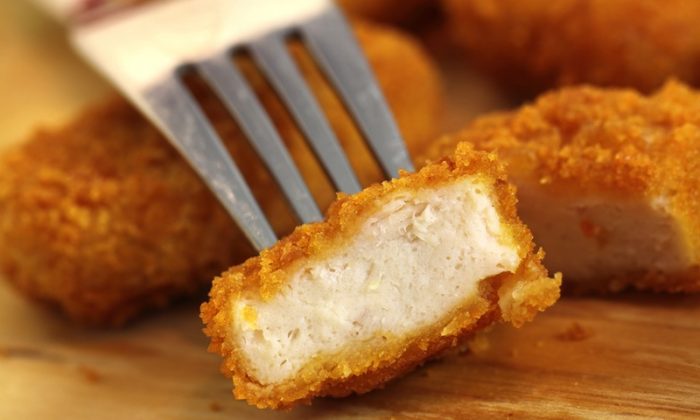 Researchers with the University of Mississippi Medical Center and Baptist Medical Center looked at nuggets from two national fast food restaurants located in Jackson, Miss., and published their findings in the American Journal of Medicine. The scientists did not disclose the names of the franchises.

The researchers took a nugget from each box and then preserved, dissected, and stained them, looking at them via microscope.

“We all know white chicken meat to be one of the best sources of lean protein available and encourage our patients to eat it,” study author Dr. Richard D. deShazo of the University of Mississippi Medical Center in Jackson told Reuters.

“What has happened is that some companies have chosen to use an artificial mixture of chicken parts rather than low-fat chicken white meat, batter it up and fry it and still call it chicken,” deShazo said.

He added: “It is really a chicken by-product high in calories, salt, sugar and fat that is a very unhealthy choice. Even worse, it tastes great and kids love it and it is marketed to them.”

“Striated muscle (Chicken meat) was not the predominate component in either nugget,” according to the research results. “Fat was present in equal or greater quantities along with epithelium, bone, nerve, and connective tissue.”

The studied concludes: “Chicken nuggets are mostly fat, and their name is a misnomer.”

The publication notes that McDonald’s says its Chicken McNuggets are 100 percent breast meat chicken, according to its website.