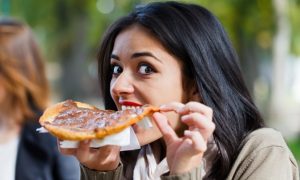 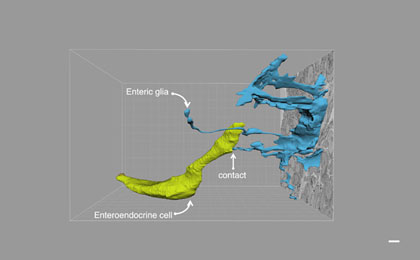 An image taken from 3-D electron microscopy reveals the structure of a neuropod -- a cell in the gut that senses nutrient levels and sends signals that govern appetite, but isn't a neuron. (Diego Bohorquez)
Health News

After each one of those big meals you ate over the holidays, the cells lining your stomach and intestines released hormones into the bloodstream to signal the brain that you were full and should stop eating.

Researchers at Duke University have now mapped out another system, a cell-to-cell connection between the gut and the nervous system, that may be more direct than the release of hormones in the blood.

The new system may change researchers’ understanding of how we sense being full, and how that sensation might be affected by gastric bypass surgery. The findings, which appeared Jan. 2, 2015 in the Journal of Clinical Investigation, also shed light on a potential new mechanism giving foodborne viruses access to the brain.

“The study supports the idea that there could be a real biology of gut feelings,” said Diego Bohórquez, an assistant professor of medicine at Duke. “As soon as food contacts the wall of the gut, the brain will know in real time what’s going on in the gut,” said Bohórquez, who conducted the study as a postdoctoral researcher in the lab of Dr. Rodger Liddle, a professor of gastroenterology.

Several years ago, Liddle’s team developed methods to visualize a type of cell found scattered throughout the lining of the mouse gut that is remarkably similar to a neuron. Although the cells have a normal shape on the gut’s surface, their underside bears a long arm.

“The question was, why would a cell that is supposed to just release hormones have a whole arm? There had to be a target on the other side,” Bohórquez said.

Dubbed ‘neuropods,’ these special arms are nurtured by support cells known as glia that work with neurons, which suggested at the time that they could be involved in a neuronal circuit.

In the new study, researchers traced the contacts of the neuropods in greater detail, finding that they came close to individual nerve fibers, but not blood vessels, in the small and large intestine. They found that about 60% of neuropods contacted sensory neurons, supporting the notion that they could be involved in gut sensation.

The group went a step further, showing that neuropods and neurons not only contact one another, but they connect. In a dish, single sensory neurons isolated from the brain reached out to contact a neuropod that was, on a cellular scale, about half a football field away.

“For us, that was a point of no return,” Bohórquez said. “It said that these cells know how to get closer to neurons,” though how exactly is unclear. The connection was especially surprising because no one had ever cultured these cells in complete isolation from their neighbors, he added.

Neuropods are so much like neurons — they contain much of the same machinery for sending and receiving signals — that the researchers then tried infecting the colons of mice with a disabled version of the rabies virus, which moves through the body initially by infecting neurons. The virus is routinely used as a laboratory tool for visualizing a single connection from one neuron to another.

It was a leap of faith, said Bohórquez, but it worked. A week after introducing the virus, only cells with neuropods became infected.

The new study focused on connections between neuropods and neurons closest to the intestine, but the team is now working to trace the whole path from the gut to brain.