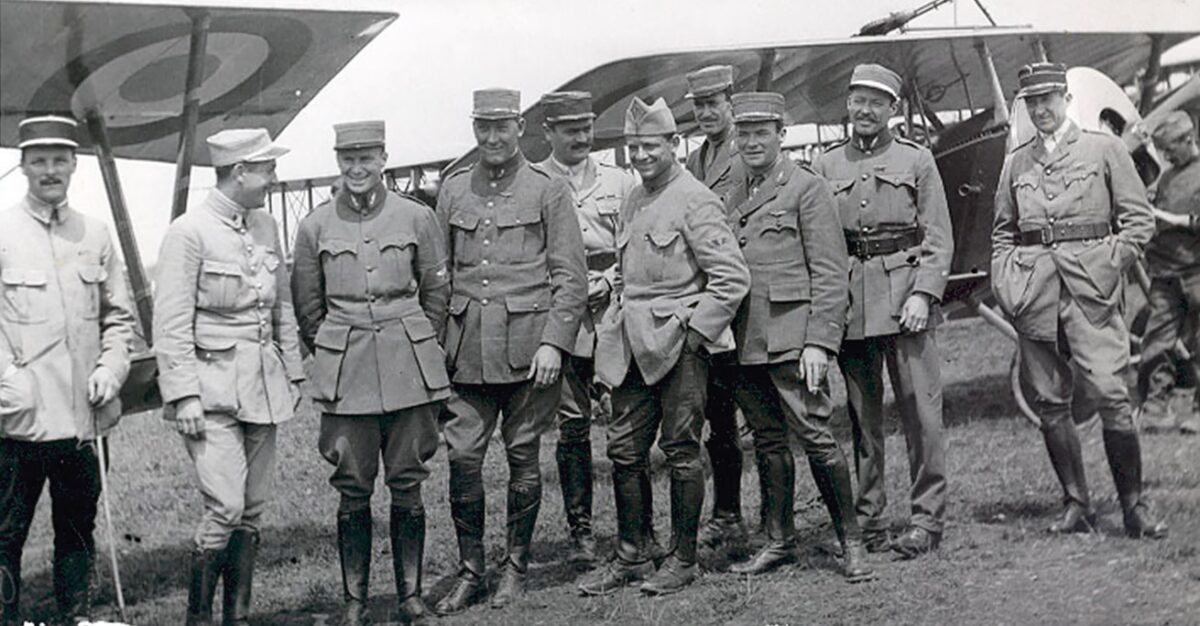 Once memorialized throughout France and America, Kiffin Rockwell’s courageous combat made him a postwar hero
BY Jeff Minick TIMESeptember 16, 2022 PRINT

On September 23, 1916, the young American pilot flying a French Nieuport 17 above Verdun spotted a German two-seater Aviatik and raced, as he so often had, to engage the enemy in combat. As he dove from 10,000 feet on the German aircraft, an explosive bullet fired by the Aviatik’s tail gunner tore into his chest. The American died instantly, and his aircraft crashed in between two trenches in a field in France, where artillerymen recovered his body.

The French government paid this brave dead pilot its highest honors, gave him a funeral that included several hundred military personnel, made his grave a shrine, and later built a monument to him and other American pilots. At the graveside service, Capt. Georges Thenault, commandant of the airman’s unit, said of his fallen comrade, “His courage was sublime. … The best and bravest of us is no longer here.”

Following his death, he was hailed as a hero throughout France and America, a celebrity of his day. After the war, his likeness was featured on bubble gum cards, stories and comic books celebrated his daring and heroism, and poets like Edgar Lee Masters memorialized him. Places as distinct from one another as Asheville, North Carolina, the Virginia Military Institute (VMI), the Pantheon in Paris, and other localities paid homage to this fallen warrior with plaques and memorials.

Yet today, Kiffin Rockwell rests in his grave in France largely forgotten by his fellow countrymen.

The Making of a Soldier

Born in Tennessee in 1892, Kiffin Rockwell was the son of North Carolinian James Chester Rockwell and his wife, Loula, a native of South Carolina. His father died of typhoid fever before Kiffin’s first birthday, leaving behind two sons, Paul and Kiffin, and a daughter, Agnes. His mother set out to shape her children into strong, intelligent young people with high ideals. His maternal grandfather, Enoch Ayers, a Confederate veteran of the Civil War, also exerted a powerful influence on Kiffin, firing up the boy’s imagination with stories of his exploits and service under Gen. Robert E. Lee.

When Kiffin was 14, his family moved from Tennessee to Asheville, North Carolina, where his mother taught school and operated a successful business as an osteopath. Kiffin attended Asheville High School, and then, still enamored of a career in the armed forces, he entered the Virginia Military Institute in Lexington, Virginia. After surviving the hazing and tough regimen of his first year at the Institute, he joined his brother Paul at nearby Washington and Lee University (W&L), hoping to become a journalist. He left W&L before graduating, entered the advertising business, traveled a bit around America—he fell in love with San Francisco—and was living in Atlanta in August 1914 when war erupted between France and Germany.

On August 2, when the first sparks of a European war were just giving rise to the bonfire of death and destruction that would follow, Kiffin, his brother Paul, and some friends were enjoying a Sunday meal in their apartment, discussing among other topics that day’s headlines about the coming war. As Paul later recounted, “After lunch, Kiffin called me aside and very seriously told me that he had been thinking a great deal during the past several days about the coming war, and that if I really wanted to go to France and join the French forces, his mind was fully made up to go.”

A few days later, the brothers sailed aboard an ocean liner bound for England and from there to the war in France. They were two of the first three Americans to join French forces.

Combat, Wounds, and Another First

Once they had arrived, they enlisted in the French Foreign Legion. French military officers were particularly impressed by Kiffin’s training at VMI and by the fact that the brothers had handled firearms since they were boys.

Warfare in the trenches left both Rockwells wounded. Paul was assigned to administrative services while Kiffin, wounded a second time, was declared unfit for more infantry duty. Rather than return home, however, he asked to enroll in the Service Aeronautique and began training as a pilot in September 1915. In April 1916, he became one of the original members of the Escadrille Americaine, later known more famously as the Lafayette Escadrille, a flying corps composed of American pilots. Just a month later, he became the first American to shoot down a German aircraft, supposedly firing just four bullets at the enemy plane.

Though accounts of his subsequent aerial battles get a bit hazy, Kiffin was clearly in the air a great deal of time over the next few months. One reliable source reports that he was in 141 dogfights in fewer than six months. He was wounded once in the face, shot down several more German opponents, and was regaled as a hero by his fellow pilots, the French, and many in America even before he met his death.

He was the second member of the Lafayette Escadrille to fall in combat.

Not everyone has forgotten Kiffin Rockwell. Recent years have seen the release of three biographies of this hero: Mark Trapp’s “A Destiny of Undying Greatness: Kiffin Rockwell and the Boys Who Remembered Lafayette,” T.B. Murphy’s “Kiffin Rockwell, the Lafayette Escadrille and the Birth of the United States Air Force,” and Marc McClure’s “Kiffin Rockwell: First American Hero of the Great War.” In addition, the internet offers numerous articles and videos describing his remarkable life.

And more than a century ago, North Carolina historian and archivist R.B. House offered this homage:

“His comrades in Escadrille 124 mourned him as their best and bravest; France mourned him as a fighter not to be replaced; America mourned him as the second of her sons to fall in air combat, following so closely in the steps of Victor Chapman, her first. All the world paid tribute to him. For Kiffin Yates Rockwell was a leader in that group of young men who left the paths of peace in their own neutral countries to fight for France, and in her person, for civilization. Chapman, Rockwell, McConnell, Genet—these men were the pioneers of America in France, and in the air. They have all fallen on the field of honor, fell there before America entered the war. And now that over sixty thousand Americans, fallen under the Stars and Stripes, sleep in France beside these men, we realize some of the full measure of their achievement, and honor them for leading the way.”

Kiffin’s idealism and his lifelong love of France led him to his sacrifice and death. As he explained in a letter to his mother near the end of his short life, “If I die I want you to know that I have died as every man ought to die—fighting for what is right. I do not feel that I am fighting for France alone, but for the cause of all humanity—the greatest of all causes.”

He also stated elsewhere, “I am paying my part of America’s debt to Lafayette and Rochambeau.” Kiffin Rockwell paid his part of that debt in full.