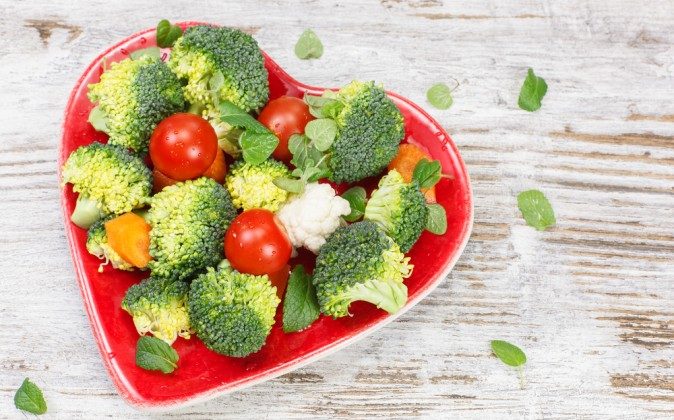 Which have more benefits, raw or cooked vegetables? Both have their merits, but raw vegetables are healthier. Here’s why. In the dead of winter, a cold salad may have little appeal—even here in sunny Los Angeles, we crave warming and nurturing cooked soups, squash, roasted Brussels sprouts and more during the wintery months. But the raw food diet, which has been popular for more than a decade, is still alive and kicking even in the dead of winter. While eating 100 percent raw fruits and vegetables may be kooky talk for most of us, there are benefits to eating some of our veggies in the raw. Likewise, some are better cooked. Here’s the lowdown.

Cooking is, essentially, the first step in the digestion process. It does some of the work our bodies would normally have to do: warm food and break it down. Our ability to cook our food is what may have led to our evolutionary leapfrog over the rest of the creatures on the planet—by reducing the digestive work our bodies had to do, we were able to develop our fascinating brain function. And we evolved accordingly. To function at optimal levels, our bodies now require a complex array of nutrients from a number of food groups (and none of them include Twinkies or Mountain Dew, in case you were wondering).

Key nutritive components in some foods have more bioavailability once heat is applied: lycopene, the potent antioxidant in tomatoes is more accessible when cooked. The British Journal of Nutrition published a study that found raw foodists had lower lycopene levels than those who ate cooked tomato products. Antioxidants like beta-carotene were found in greater numbers in cooked carrots, cabbage, spinach, mushrooms and asparagus as well, particularly when boiling and steaming, according to a report in the Journal of Agriculture and Food Chemistry.

But raw has its advantages, too. Raw food enthusiasts contend that raw fruits and vegetables contain potent enzymes, important in the digestive process and immune-enhancing, which can be destroyed during cooking. Fiber, which is vital for heart and digestive health, can also be lost when foods are overheated. Vitamin C, which is water soluble, can be lost in cooking methods. Cruciferous vegetables, such as broccoli, cabbage and kale, contain potent antioxidants that have been connected with a decreased risk of certain types of cancers. A study published in the journal Food and Chemical Toxicology found that the isothiocyanates and glucosinolates in cruciferous vegetables were decreased during the cooking process.

Clearly there are advantages to eating both raw and cooked vegetables. Methods like massaging (used on hardy greens such as kale) use salt and oil to make the food more digestible while preserving potent enzymes and antioxidants that could be lost during cooking and are a healthy way to get the benefits of a food. When cooking vegetables, try steaming or boiling until just tender. Avoid frying. And try some of your favorite cooked veggies raw, too: a green salad can include uncooked beets for an iron-rich crunch, crisp broccoli florets, the snap of a pepper (technically a fruit). And remember, unless it’s super-duper deep fried, vegetables are always a healthy food choice—whether raw or cooked—at least until our next evolutionary jump.