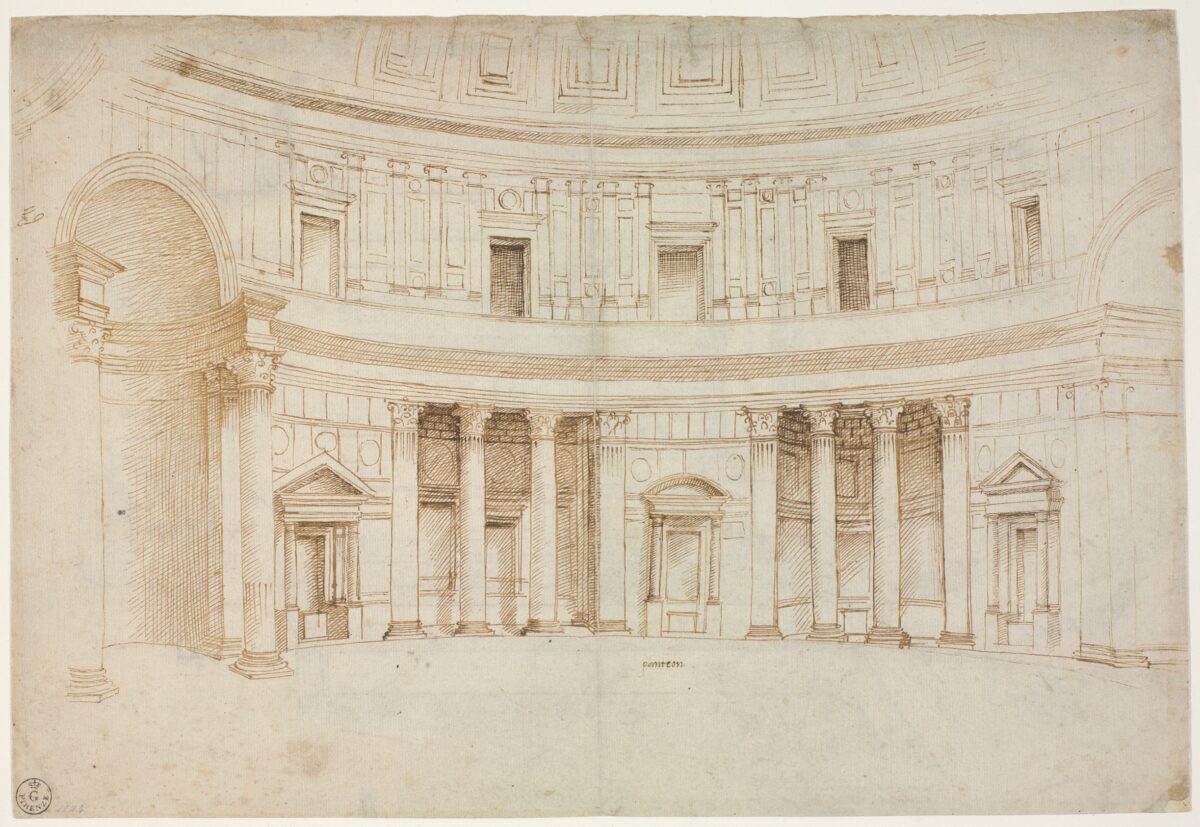 In a 1519 letter to Pope Leo X, Raphael and his friend the courtier and diplomat Baldassare Castiglione appealed to the pope to protect the city’s ancient art. Both men drafted the letter, but it’s written as if it were from Raphael.

“I dare to say that all one can see today in Rome, no matter grand she might be, or beautiful, or adorned with palaces, churches and other edifices, all was built with the mortar of ancient marbles!” Raphael wrote.

Not only does Raphael lament the loss of Italy’s ancient art in his letter, but he also details his approach to architecture, archaeology, conservation, and techniques for his survey of ancient Rome, one of his most ambitious projects.

The importance of this letter cannot be overstated. According to the website for the Palazzo Castiglioni (Castiglione’s ancestral home), the “letter constitutes the founding document of the protection and conservation of Italy’s historic and artistic heritage and of article 9 of the Italian Constitution.”

Visitors to The National Gallery, London, can see the letter, until July 31, in “The Credit Suisse Exhibition: Raphael.” They can also see on display more than 90 of Raphael’s works across various media.

Exhibition visitors may be surprised at the depth of his work. Beyond his great paintings and drawings, he designed for print, tapestry, and applied arts. He was also an architect, an archaeologist, and an art theorist, the exhibition’s co-curator Matthias Wivel said in a phone interview. Wivel hopes that visitors will be able to see that Raphael applied the same conceptual visual logic in all of his different activities.

Seeing the artist’s letter on display in the exhibition with some of his architectural drawings puts his work as an architect and a protector of ancient art into context.

Raphael’s architectural designs feature in many of his works, from large paneled altarpieces to his cartoons for the Sistine Chapel’s tapestries. But a chance to see his original architecture, without additional structures (for instance) that have been added over the years, is rare. Even his tomb in the Pantheon has been added to. Anyone curious to see Raphael’s original tomb that he designed can visit the Church of the Discalced Carmelites in Urbino, his birthplace. There, one can see a reconstruction that was made in 2020 for the “Raphael 1520–1483” exhibition at the Scuderie del Quirinale, in Rome.

Since a teenager, Raphael had been fascinated with architecture. Raphael the architect really blossomed in Rome after Pope Julius II invited him to the city on the recommendation of his architect Donato Bramante. Bramante came from Urbino, too, and knew of Raphael’s work. In 1514, when Bramante died, Pope Leo X made Raphael the chief architect of St. Peter’s Basilica and of the Vatican Palace; then in 1515, he made Raphael “Prefect of Stones and Marbles.” This latter role meant that he needed to be told of any ancient ruins and that no inscribed stone could be destroyed without his permission.

Raphael went to great lengths to study ancient art and architecture. Renaissance architects climbed scaffolding to study, measure, and make their detailed architectural drawings of ancient buildings. He measured ancient structures up close, copying and comparing the architecture with treatises written by “the best authors,” he noted in his letter. He even had humanist scholar Fabio Calvo stay in a room in his house while Calvo translated the 1st-century B.C. architect Marcus Vitruvius Pollio’s “De Architectura” from Latin to Italian. (This was before Daniele Barbaro’s and Andrea Palladio’s famous translations.)

He wrote in his 1519 letter to the pope: “I believe that I have managed to acquire a certain understanding of the ancient architecture. This is something that gives me both the greatest pleasure, from the intellectual appreciation of such an excellent matter—and extreme pain—at the sight of what you could almost call the corpse of this great noble city, once queen of the world, so cruelly butchered.”

The Decline of Ancient Art

Raphael detailed the history of ancient architecture in his letter, and how “despite the fact that almost all the other arts had long been in decline, nonetheless architecture was respected and good theory was maintained.”

He also saw how the architecture itself told the story of ancient art’s demise. He wrote: “Of all the arts, it was architecture that was the last to be lost; this can be understood from the Arch of Constantine, whose design is beautiful and well executed as regards everything concerning its structure, while, on the other hand, the sculptures on this very arch have no taste, nor show any skill or redeeming qualities.”

Perhaps seeing the pattern of ancient art’s demise reemphasized to Raphael how important the practice of traditional art was. He wrote in the letter about how architects went about conducting his survey of ancient Rome: “Those who want to practice architecture … be mindful that in our drafting of this work we did not allow ourselves to be governed by chance or practice alone, but we worked with well-informed theory.”

In his letter, Raphael detailed the different types of architectural drawing needed for his survey. “Architectural drawing is divided into three types: ground plans (the building’s footprint), elevations (the exterior wall and its ornaments) and sections (half the building inside, showing the correspondence of interior and exterior),” wrote Caroline Elam in the exhibition book. Architects created formal drawings in pen and ink, and washes.

Drawings that Raphael made of the Pantheon—”View into the pronaos (entrance portico)” and “Profile of the entablature of the main (lower) order of the interior”—are in the exhibition but are artistic renderings rather than architectural drawings. For instance, for the profile of the entablature, he used perspective, so the quick sketches he made on the back of the paper are drawn as if viewed from below.

The catalog notes that the profile drawing may be a copy of an exact drawing: Raphael’s or another architect’s. Architects often copied other architectural drawings to save the time, effort, and probably danger of scaffold climbs. Raphael made several corrections to his drawing, perhaps after comparing it to the original building. One obvious change is the number of flower petals on a cornice.

His rare, finished drawing of a villa project, owned by the Ashmolean Museum, is an example of an elevation drawing that he would’ve presented to his patron to convey the project after extensive discussions.

It is an orthogonal drawing, which is a series of two-dimensional drawings used to show a three-dimensional object without perspective. But Raphael, like Michelangelo, used his artistic skills of perspective to add in details. He used a ruler, a “blind stylus” (a metal point), and a compass to plan the drawing. Yet he hastily added in the windows freehand.

Raphael’s last surviving architectural drawing is a stage set: “Design for the right-hand wing of a stage set.” He created light, shade, and solidity to the building in the drawing by layering diluted washes and then adding touches of white lead. At first glance, the drawing looks finished. But look closer and you’ll notice that he left small unfinished details. He made a few marks suggesting an arm and the head of a person peering out of the doorway.

Exhibition visitors can now see only a copy of this drawing. Curators displayed the original work until June 20, but the copy protects the original from damage. This stresses the fragility of these works, and the expert considerations taken into account when works enter an exhibition. And indeed, what a rare treat it is to see some of these pieces.

For educated Romans of the upper class, Raphael’s sudden death in 1520 (a year after he wrote his letter to the pope) also meant the death of his ambitious survey of ancient Rome and a reconstruction of its architecture.

In Raphael’s day, no formal architecture training existed. The marriage of ancient Rome and Renaissance Rome bred architectural professionalism. “[T]he Rome of Julius II, Leo X and their successors saw an increasing professionalisation of the practice of architecture,” Elam wrote in the exhibition book. Architects, keen to learn from the past, made measured, detailed drawings of the ancient buildings that were constantly being excavated. And architects working on the new St. Peter’s Basilica used ancient buildings for inspiration.

Elam wrote: “Raphael had a central part in all of this.”

“The Credit Suisse Exhibition: Raphael” at The National Gallery, London, runs through July 31. To find out more, visit NationalGallery.org.uk