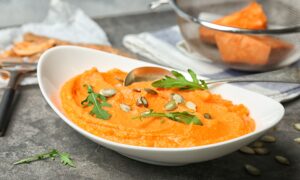 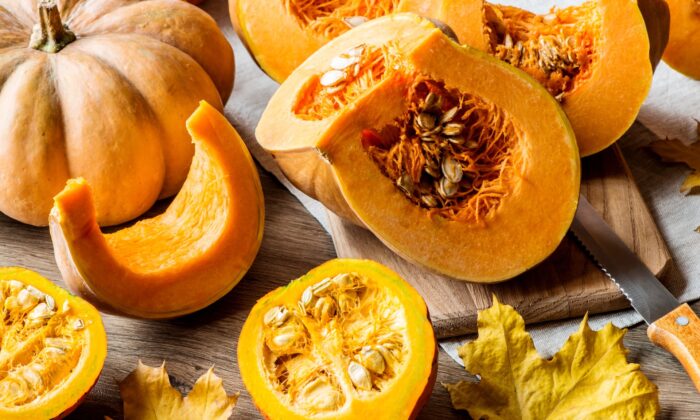 Pumpkins are a culinary powerhouse—as long as you use the kinds bred for eating, not for carving. (RONEDYA/shutterstock)
Food & Dining

Pumpkins to Cook, Not Carve

Far beyond seasonal decor, these pumpkin varieties have endless potential in the kitchen
By Eric Lucas

Consider the lowly, unappreciated pumpkin. Sarah Frey does this a lot.

“Pumpkins bring me joy. It’s my happy crop,” declared the largest grower and shipper of pumpkins in the United States. Owner of Frey Farms, based in southern Illinois, Frey is responsible for the arrival each autumn of 5 million pumpkins (yes, 5 million) at grocery stores and other retail outlets across America. Her company grows these millions on about 3,000 acres, and contracts for production of 1 million more.

That’s a lot of pumpkins. The big, orange, snaggle-tooth sculpted Jack ‘o’ lantern (they’re called “jacks” in the produce trade) is one of our most familiar agricultural icons (and makes up 75 percent of Frey’s pumpkin production). And appreciative cooks like me consider pumpkins a horticultural marvel—sensational savory ingredients packed in a nature-made storage device that lasts long into winter, both powerfully preservative and beautifully decorative. Can’t say that for ziplock bags.

So why would I call pumpkins unappreciated underdogs?

Easy. The vast majority of Americans value whole pumpkins for decorative purposes only. If you say the word “pumpkin,” most think of massive piles of massive orange jacks in supermarket parking lots … or of pumpkin spice lattes, Starbucks’ insanely popular contribution to pumpkin iconography, which has very little actual pumpkin in it and originally had absolutely none. A much smaller but fervently devoted group values pumpkins only in terms of the ubiquitous giant-pumpkin contests that bring fame and fortune to the grower of the most bizarrely Brobdingnagian (and practically useless) pumpkin each fall.

Frey, who had an established business producing melons, began growing pumpkins as a new cash crop, but her natural curiosity and adventurous nature led her to try many different kinds from the start. “I became obsessed with all the different varieties of pumpkin—the sizes, the shapes, the colors,” she writes in her new memoir, “The Growing Season.” “It seemed as though we were missing out in America by just carving them up once a year and tossing them out to the squirrels.”

Pumpkins are in fact a culinary powerhouse—as long as you use the kinds bred for eating, not for carving.

I have long grown two pumpkins that I cure and store for winter use. Fairytales, a French heirloom variety, are large, chocolate-brown beauties whose intense persimmon-colored flesh not only makes marvelous pies, but is also perfect added to winter stews in chunks as a cold-season quasi-zucchini ingredient. I also have a smaller, kabocha-type fruit I developed myself that is perfect for a midwinter dinner—halved, roasted, and served alone with ample daubs of butter. They are vivid orange-red orbs that keep for months on the dining room table.

“My favorite types of pumpkins are those that look great and taste great,” said pumpkin advocate Mary Jane Duford, a culinary gardening writer based in British Columbia. “That way, I can use them in my fall decor before cooking them up in a fall dish (we love pumpkin bread in our household).

“Jarrahdale pumpkins are a beautiful option with a blue rind and a smooth, refreshing taste. Kabocha pumpkins are beautiful, dark green Japanese pumpkins with a bright orange interior and earthy, autumnal taste. Marina di Chioggia is a warty Italian heirloom with deep orange, sweet flesh.” She’s also a fan of the Fairytale, for its “almost antique patina” and “sweet and subtle flavor.”

All these varieties are derived from the New World squashes that were part of indigenous America’s “three sisters” of corn, beans, and squash, and which have been adapted into different types and different cuisines in every corner of the globe.

Hector Toyos, chef at The Monocle restaurant in Washington, D.C., recalled that during his formative years training in French cuisine, pumpkin was popular for soups, stews, purees, and many other non-dessert uses. For a recent harvest dinner, Toyos served lightly braised scallops atop a pumpkin puree, a dish seasoned only with garlic, shallots, cayenne, and salt and pepper—“simple, but really good.”

Kerrie Roetcisoender, owner of Muddy Boots Pumpkin farm in the Snoqualmie Valley east of Seattle, added culinary varieties to her fields after customer requests—and began discovering in her own household the many culinary uses of the new varieties. Her favorite is Blue Doll, which her husband likes to halve, partially roast, fill with beef stew, and roast some more.

But there is one culinary variety that seems most popular by far in the United States, one that most stores, markets, and growers would have on hand. It’s also the one called out in most start-from-scratch pumpkin pie recipes.

“What you want, sweetie-pie, is Sugar Pie.” My local CSA farmer, Lori Ann David, hoisted a medium-size light orange pumpkin, sporting streaks of green, and grinned. “It’s my go-to for cooking. You can’t beat the flavor. The other night I made a pumpkin curry soup that—oh my.”

David’s advice illustrates the best way to find a good culinary pumpkin: Talk to a grower at a farmers market, a local CSA farm, or a knowledgeable buyer at a quality grocery store. If they don’t know the answer, Sarah Frey believes that they should.

“Pumpkins are incredible vessels for food and flavor,” argued Frey, who has adopted a role as national pumpkin advocate—“America’s Pumpkin Queen,” The New York Times labeled her.

“People get happy over pumpkins,” she continued. “If that’s mostly because of Jack o’lanterns, it’s because we haven’t done a good enough job of educating consumers. And that’s up to people like me.”

So go ahead, ask your grocer for a Jarrahdale, or a Blue Doll, or a Peanut pumpkin. Make it into curry soup, or lamb stew, or even just a midwinter side dish, and let’s squash pumpkin ignorance this season.

Eric Lucas
Follow
Eric Lucas is a retired associate editor at Alaska Beyond Magazine and lives on a small farm on a remote island north of Seattle, where he grows organic hay, beans, apples, and squash.
TOP NEWS