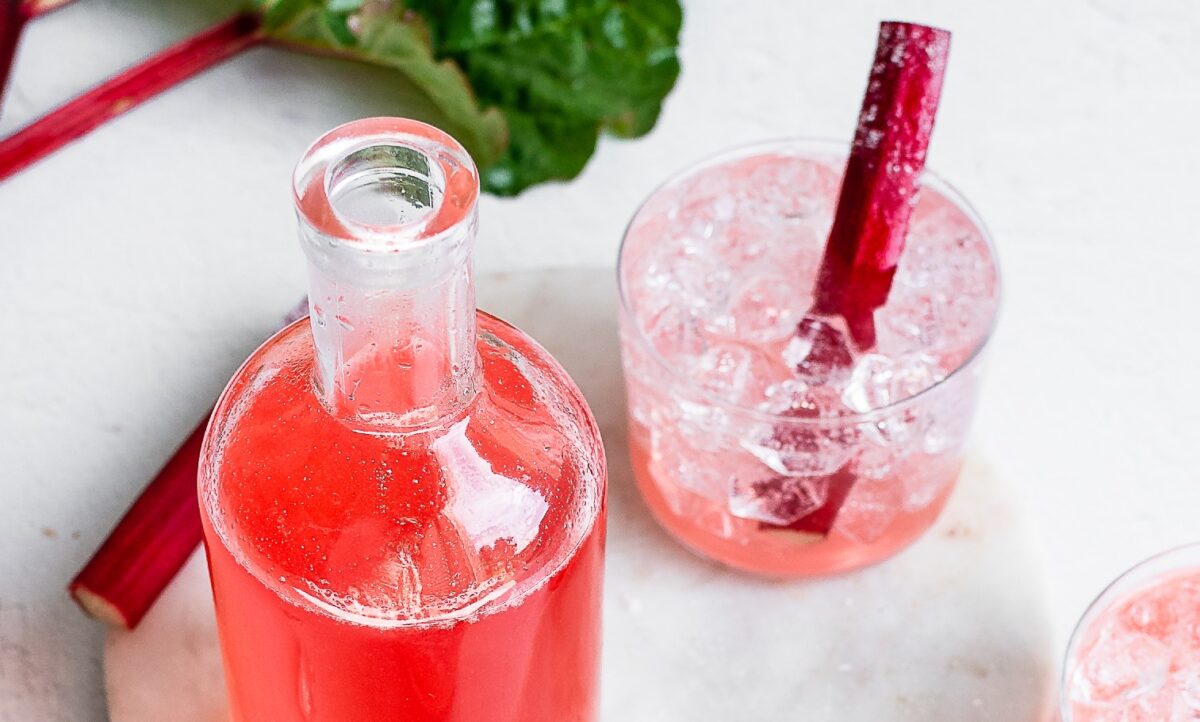 You can make a shrub with just about any fruit, but this pretty pink version is a simple way to use up all the rhubarb in your garden. Use bright red rhubarb, diced small, and white wine vinegar. Mint, cardamom, and ginger are all nice additions. (Jennifer McGruther)
Food

Pucker Up, Bottoms Up: How to Turn Any Fruit Into a Shrub for the Most Refreshing DIY Drinks

These concentrated, sweet-tart syrups, originally a way to preserve seasonal fruit, are making a comeback—including in the home kitchen
BY Jennifer McGruther TIMEMay 19, 2022 PRINT

Before there was Coca-Cola, there were shrubs. Not the kind that grow in your garden, but a sweet-and-sour drinking vinegar that’s irresistible, especially in hot weather. Infused with fruit, herbs, and spices, shrubs not only slake your thirst but also provide an inventive way to preserve seasonal bounty. And just like baking sourdough and fermenting your own sauerkraut, shrubs are on the verge of a comeback.

Shrubs are more than a drink. They’re a tradition with deep roots that stretch from ancient medicine-makers to seafarers, pirates, and hard-working early American colonists, all the way to the mixologist at your local hipster bar. For good reason, too: Shrubs taste delicious and are one of the easiest things you can make in your kitchen.

A shrub is a vinegar-based syrup with a startling sweet-and-sour flavor. At its most basic, a shrub needs only vinegar, sweetener, and fruit. You can also add herbs and spices. Once the shrub syrup is ready, you stir it into mineral water for a pleasant soft drink, or, as 17th-century sailors were fond of doing, add it to rum.

Shrubs’s roots stretch far back to ancient Persia, where they were called sekanjabinat, referencing the drink’s primary ingredients: vinegar (serke) and honey (anjabin). Herbalists combined honey, vinegar, fruits, vegetables, and medicinal herbs to remedy all sorts of ailments, from pain and indigestion to fevers and even snake bites.

The medieval Persian text “Gharabadin Salehi” calls for combining pomegranate, vinegar, and honey to ease chronic fevers. A version made with squill (a type of purple flower in the asparagus family) and borage was thought to ease respiratory complaints. Today, sekanjabin made with honey, vinegar, cucumber, and mint is a popular drink throughout Iran.

Ancient Greeks adapted these Persian remedies, making their own oxymels. Like the Persian word sekanjabin, the word oxymel is also a compound of the words vinegar (oxy) and honey (mel). Oxymels make it easier and more pleasant to take bitter medicinal herbs, and herbalists continue to use them today. A 1907 book on British pharmacology calls for making an oxymel of horehound, a wickedly bitter-tasting herb, to remedy coughs.

Around the 15th century, honey-sweet oxymels and medicinal cordials, still popular among herbalists today, made way for the fruit-forward drinking vinegars we know as shrubs. People would store fruit in vinegar as a way to preserve it, and then mix the vinegar with spices and sugar or honey. They proved popular around Christmas time and were enjoyed in English pubs during the 17th and 18th centuries, where they were often mixed with spirits.

Vinegar was often issued to sailors as it was thought—erroneously—to ward off scurvy. Legend holds that 17th- and 18th-century smugglers would often dump casks of rum into the sea to avoid import taxes when their ships were inspected upon arrival at a new port. When they’d retrieve them later, the flavor could be spoiled by seawater, and mixing the rum with fruit- and spice-infused shrubs improved their taste.

In the 18th century, early American colonists slaked their thirst by drinking shrubs. Long hours working the fields in hot weather drove a need for relief. Indeed, a special type of shrub made with powdered ginger, molasses, and apple cider vinegar is called “Haymaker’s Punch.” Ingredients were both affordable and accessible. It was popular among early American field workers who found that it not only quenched their thirst, but also fortified their energy on hot days.

These sweet-and-sour drinks remained popular until the early 20th-century, when Americans seemed to lose interest with the advent of newer soft drinks and soda fountains. In the last few years, however, with a rising interest in mixology and craft cocktails, there’s been a resurgence in shrub-making. If you’re lucky, you might find them at a local bar. If not, they’re super simple to make yourself.

How to Make Your Own Shrubs

Traditional recipes call for pouring vinegar over fruit, letting it rest for anywhere from a day to a week, before straining and boiling with sugar to form a fine syrup. Modern recipes typically call for mixing everything together at once and letting the sugar dissolve in the room-temperature vinegar. As is the case with many things, the traditional method often yields finer results—a more uniform syrup.

Apple cider vinegar is the most popular vinegar for making shrubs, because it’s affordable and you can find big bottles in just about every grocery store. But consider branching out to wine vinegars, too. Red wine vinegar, white wine vinegar, and champagne vinegar have delicious, delicate flavors that can really shine in a homemade shrub. Red wine vinegar works beautifully with dark fruits, such as cherries, figs, and currants, while white wine and champagne vinegars are well-suited to apricots, berries, rhubarb, and peaches.

Avoid using distilled white vinegar, as it has a higher acidity level, resulting in a less pleasant flavor.

For your sweetener, plain white sugar works best since it has a fairly neutral flavor; it’s also the sweetener of choice in most 19th-century recipes for shrubs. Any sweetener works, however, so experimenting with molasses, maple syrup, and honey can yield fun results, too.

Since shrub-making acted as a way to preserve fruit, and since shrub syrups are highly acidic, you should be able to store them at room temperature in a dark cupboard. Most modern recipes recommend storing them in the fridge, though, as a safety precaution.

To use them, mix about 1 or 2 tablespoons of syrup into 8 to 12 ounces of sparkling water. Or, take a hint from 17th-century smugglers and add it to rum instead.

You can make a shrub out of just about any fruit, though berries and stonefruit seem to work best. Look for ripe fruit with a vibrant color and sweet aroma. You’ll start by pouring vinegar over fresh fruit, flavoring it with any whole herbs or spices you happen to like (avoid powdered versions, which will create sediment), and letting it sit. The longer it sits, the richer the color and flavor will be. After infusing the vinegar, strain it and mix it with sugar.

Drop the fruit into a quart-sized mason jar, and cover it with the vinegar. Add herbs and/or spices, if using. Seal the jar tightly and let it sit at least 1 day and up to 5 days away from direct light and heat. Shake the jar daily.

Strain the fruit-infused vinegar through a fine-mesh sieve into a small saucepan. Stir in the sugar, and then set the saucepan on the stove over medium-high heat. Warm the vinegar until the sugar completely dissolves, and then transfer the shrub syrup to a bottle. Seal the bottle and store in the fridge for up to 6 months.

To serve, mix 1 to 2 tablespoons of the syrup into 8 to 12 ounces of sparkling water or tap water, or mix into a cocktail.