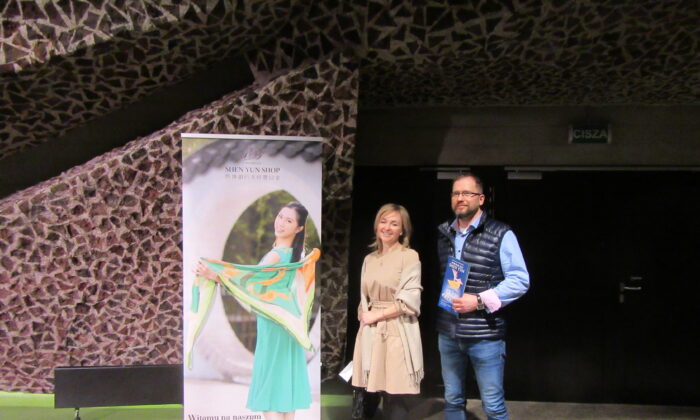 The couple traveled to see Shen Yun at the CKK Jordanki Concert Hall in Torun from another city. Mr. Godlewski said the trip normally takes four hours, but the day before the performance there was a snow fall, so it took them six hours to get to Torun.

“My wife is a physician and I am an engineer so we are busy with routine things every day but the time we spent here opened us for the spirit that has shaped the Chinese culture,” said Mr. Godlewski who attended the Jan. 21 matinee of Shen Yun with his wife Ms. Aneta Adamiak-Godlewska.

I am talking not only about the artists themselves, …  our interaction with what was happening on stage was extraordinary.
— Jacek Pawel Godlewski

“It also shows how much power lies in it, how much [Chinese] still have to do to resurrect this power.”  Mr. Godlewski continued.  “The dance is also something that allows man to express himself, it releases what lives somewhere inside a person. I am talking not only about the artists themselves, …  our interaction with what was happening on stage was extraordinary.

“For example—it is not always the case that the art form of conveying a message occupies me to such an extent that I will immerse in it. However, today it was such a situation that I really immersed myself in it. A mass of colors in this drab world—this is something wonderful,” he said.

Based in New York, Shen Yun is a classical Chinese dance and music company, which aims to revive China’s rich culture which has been all but destroyed after decades of communist rule in China.

The couple enjoyed Shen Yun’s music, especially the sound of the Chinese instrument called erhu. Though it has only two strings, it can convey a wide range of emotions, according to the Shen Yun website.

“[It was] so exceptional, unique,” Mrs. Adamiak-Godlewska said about the sound of erhu.

“The fact that someone has fallen in love with this instrument, … like this lady [who played erhu], [the fact that] someone chose it from the pool of instruments and tried to convey emotion–this is again a birth and an expression of what is within a person,” Mr. Godlewski explained.

“You need to first settle in this culture, you need to get it out from within, find these roots, and only then pass it on through this instrument. I think that it is a fantastic hit,” he said.

According to the Shen Yun website, artists in the past looked to the divine for inspiration believing that to create art that uplifts, they must first cultivate goodness. Today, Shen Yun’s artists follow this noble tradition.

“I think that’s all that happened on the stage, such a spiritual depth, I think it is passed [to us] no matter what we really believe in. So it was a special, really special [performance],” Mrs. Adamiak-Godlewska said.

Mr. Godlewski explained that “for him such values ​​that are deeply embedded in a person or, in general, in a human being– they always have a root in something bigger or are born from something bigger.”

He said that in his opinion, “it is really about discovering what is the universal truth”  or the truth that always defends itself regardless of are what philosophy or religion follow those who appear on the stage.

This universal truth is greater than this earthly truth because it also applies to a certain universe, Mr. Godlewski said.

Mr. Godlewski saw Shen Yun as a celebration shared with the audience, “It is about looking for a universal truth that frees man so he can live his life to the fullest, and precisely enjoy being alive—celebrate the joy.

“What we saw here, it is also a kind of celebration. [The artists] led us through emotions and it gave me a lot of joy, they also shared their joy. And that’s fantastic.”

Ms. Jadwiga Chmielowska, a journalist and a social and political activist, was also in the audience on the evening on Jan. 21 watching Shen Yun a second time.

Since she lives in another city she took a train early morning on the day of the performance and in six hours arrived in Torun.

For Ms. Chmielowska, the main message for her from this performance was that man should be guided by God’s love during his life on the earth and man should live in truth, and should be honest.

Ms. Chmielowska, who was also an activist of the anti-communist opposition in the 1970s and 1980s, said she was shocked when she saw a dance story that touched upon the issue of forced organ harvesting from prisoners as a form of persecution of religious groups of various faiths and national minorities taking place in communist China.

She said that she heard a prominent official making a statement that the tyranny in communist China is unavoidable because it is rooted in Chinese tradition and culture. “[Shen Yun]  shows that it is not true, that there have been 5,000 or more years of a magnificent culture of freedom, submission to the Creator,” Ms. Chmielowska said.

“It is very important to show normal people, who come to see these performances, that China has a huge, dating back several thousand years history of a country that had a beautiful tradition, a beautiful culture, and love for the Creator and for living in accordance with the Creator’s message. So I think [Shen Yun] did that very well,” she said.

Ms. Chmielowska saw Shen Yun two years ago in Berlin, Germany, and said that she was very happy when she found out that the artistic company would perform in Poland this year.

“It was worth coming,” Ms. Chmielowska concluded.