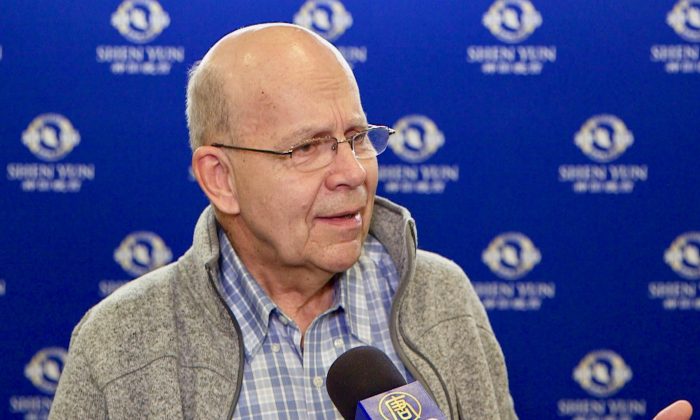 Nérée St-Amand said seeing Shen Yun was like being in heaven, and left the National Arts Centre in Ottawa, Canada, on Dec. 29, wanting to return again to see the performance. (NTD Television)

OTTAWA, Canada—Nérée St-Amand left the theater so inspired, he thought he might come back the next day to see Shen Yun Performing Arts all over again.

“Really, I seriously want to come back, maybe tomorrow,” St-Amand said. Then it occurred to him that the classical Chinese dance company would be moving onto the next city of its tour. “It doesn’t matter … I could go to Toronto. I go to New York sometimes too.”

“Unfortunately it is the first time [seeing Shen Yun]. but I hope it’s not the last time. I got so much out of this, and there’s so many lessons to learn from all of these sketches and presentations, I want to come back,” he said.

Shen Yun Performing Arts often evokes a profound reaction from audience members, and many do indeed attend year after year. After all, the program changes every season.

For St-Amand, co-founder of the School of Social Work at the University of Ottawa, it was the sheer volume and quality of content that elicited this immediate reaction. There was much to think about, after seeing the dance performance at National Arts Centre on Dec. 29.

“So many values … come out of each presentation: Generosity, compassion, loving each other, purity, beauty, survival of humanity,” he said. “And then you also see the contradictions of today’s world, … you see how this all brings us down in terms of culture, so we want to have the best of culture.”

Through all this, the New York-based company aims to revive 5,000 years of a once nearly lost traditional culture.

The artistry of all these pieces as a whole came together to create what St-Amand called a divine experience, but he had a special mention for the instrumental solo.

“The erhu! I’ve heard it in so many places around the world, and now hearing it here, I want to cry. It’s such a pure instrument, a divine instrument,” St-Amand said. “It’s so elevating, so pure, so beautiful, so divine.”

“It kind of brings me back to the first idea of ‘where is heaven?’ and heaven is here when you hear the erhu, and when you see these beautiful movements and colors and music, and all of this, and all the lessons behind this,” he said.

St-Amand felt a tremendous sense of spirituality in the performance, which is no surprise considering China once had many names that hinted at this, such as the Divine Land and the Celestial Empire. It is a culture that is believed to be imparted from the heavens, and for 5,000 continuous years civilization operated on values that stemmed from Buddhism, Taoism, and Confucianism.

Seeing this brought to mind the value of tradition.

“We have to go back to the traditions,” St-Amand said. “They had some basic values for helping each other, for compassion, for being able to understand this world, and accept this world. All of them had spiritual values also, which we’re leaving behind. That’s the essence of humanity.”

In the world today, it is easy to become materialistic, St-Amand said, but being immersed in the performance was an inspiring reminder of what is important.

“It brings me back to the fact that we all come from the heavens, and that’s where we want to return,” St-Amand said. “In terms of values, we need to go back to the basic values that allow humanity to survive and thrive.”

In the stories Shen Yun told, and the art forms of dance and music themselves, St-Amand felt love.

“The love that is expressed here, but it’s not like human love, like sexuality or sensuality, it’s a very evolved conception of love,” he said.

“Like divine love, like the angels and all the beauties of heavens, expressing what real love is. It’s something very evolved, very spiritual, very beautiful, very elevating for myself.”

“It feels like these people don’t walk on earth, they walk on heaven,” he said.

St-Amand felt the performance was so inspiring, it could change one’s worldview.

“If you want to be in heaven for three hours, come over here,” he said.

With reporting by NTD Television and Catherine Yang