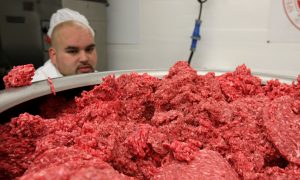 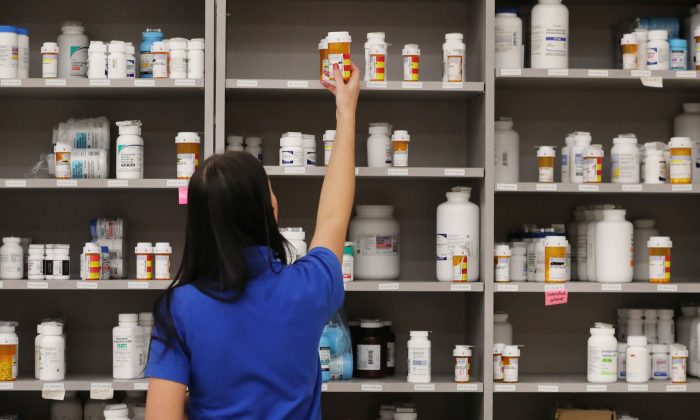 A pharmacy technician grabs a bottle of drugs at the central pharmacy of Intermountain Heathcare in Midvale, Utah, on Sept.10, 2018. (Photo by George Frey/Getty Images)
Health News

U.S. health officials have announced the recall of over-the-counter heartburn medication after tests found traces of a substance linked to cancer.

The recall comes after the U.S. Food and Drug Administration (FDA) said that it discovered “that some ranitidine medicines, including some products commonly known as the brand-name drug Zantac, contain a nitrosamine impurity called N-nitrosodimethylamine (NDMA) at low levels. NDMA is classified as a probable human carcinogen (a substance that could cause cancer) based on results from laboratory tests.”

There is no current recall for the “brand-name drug Zantac,” although the FDA is testing to ascertain safety.

Drug manufacturer Apotex said in a statement that it’s voluntarily recalling ranitidine tablets sold at Walgreens, Walmart, and Rite Aid over the possible presence of NDMA.

“Apotex has learned from the U.S. Food and Drug Administration and other Global regulators that some ranitidine medicines, including brand and generic formulations of ranitidine regardless of the manufacturer, contain a nitrosamine impurity called N-nitrosodimethylamine (NDMA) at low levels.

“To date, Apotex has not received any reports of adverse events related to use of the product,” the company said.

“NDMA is classified as a probable human carcinogen [a substance that could cause cancer] based on results from laboratory tests. NDMA is a known environmental contaminant and found in water and foods, including meats, dairy products, and vegetables,” the U.S. Food and Drug Administration said.

“Consumers taking OTC ranitidine, which is used to prevent and relieve heartburn associated with acid ingestion and sour stomach, may consider using other OTC products approved for their condition,” the agency added.

“Drug impurities remain a major national concern,” said Dr. David Robbins, associate chief of endoscopy at Lenox Hill Hospital in New York City, in a statement to WebMD. “While Zantac may prove safe in the long run, this latest statement adds confusion and concern, so my interim advice to patients is simple: switch to another drug … and of course, confirm with your doctor the need for an antacid.”

Apotex said it is “recalling ranitidine tablets 75mg and 150mg (all pack sizes and formats),” on a precautionary basis.

“We are continuing our investigation along with our international counterparts, and we will keep the American public informed of any additional recalls as well as the potential risks from taking ranitidine products,” said Dr. Janet Woodcock, director of the FDA’s Center for Drug Evaluation and Research.

The FDA said it is isn’t recommending people stop taking all ranitidine medicines, but that consumers taking OTC ranitidine should consider alternatives.

The recalled tablets can be identified by NDC numbers stated on the product label and are as follows:

It’s not clear where the NDMA contamination might have originated.

“We began testing ranitidine products immediately after we learned of the potential impurity. When we identify lapses in the quality of drugs that pose potential risks for patients, the FDA makes all efforts to understand the issue and provide our best recommendation to the public as quickly and accurately as possible,” said acting FDA Commissioner Dr. Ned Sharpless. “We will continue to investigate and work to ensure these types of impurities do not exceed acceptable limits, so that patients can continue taking the medicines they need without concern.”

NDMA is the same chemical that triggered several recalls of heart and blood pressure medications in the past year.

Prevacid, Nexium, Prilosec, and other heartburn drugs have different ingredients and aren’t included in the FDA alert.

The U.S. Centers for Disease Control and Prevention says (pdf) that NDMA has been found in cured meats, tobacco smoke, fish, cosmetic products, and other items.